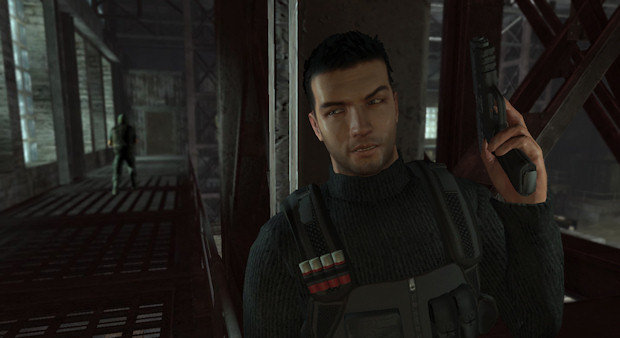 I’ll admit it: Of the three Sega titles I was viewing today, Alpha Protocol was the smallest blip on my radar. I simply didn’t know enough about the game, while I’d been stoked about AvP and Bayonetta for ages. Now that I’ve gotten a sweet first look at the game, however, I have to say that the blip has increased in size considerably.

This is Obsidian’s twenty-five hour espionage RPG. That sounds a little nuts, but it’s looking really, really good. Hit the jump as Destructoid takes on a little tour of Alpha Protocol.

As we explained, Alpha Protocol is an RPG with a spy theme. However, unlike other RPGs, there is no evil superpower to be encountered in the game. Protagonist Mike Thornton can choose a variety of sides and align with a vast amount of characters, but there is no good or evil. It’s all down to who you trust and like, not whether or not you want to be “evil” or “good.”

Thornton won’t get stark moral choices in a pretentious attempt to look deep and conflicting. He can certainly be a dick if the player wants him to be, but he won’t go from being a heroic hero of heroism to a baby-eating monstrosity at the flip of a switch. Quite what the overall story will be, Obsidian didn’t tell us, but whatever it is, it’ll be full of branching paths and should be able to take wild turns that are different with each playthrough.

The tag line for the game is “Your weapon is choice,” and this is a mantra that the game holds close to its heart. Although you can only play as Mike Thornton, you can customize him any way you wish, choose what sides he takes, who he befriends, betrays, and even dates. You can customize his facial features and clothes, and the way he fights.

The game’s combat is fairly simple, but once again is full of choice. It can be played a straight-up shooter, or a sneaky stealth game, with Thornton able to invest points into a number of skills that tailor him to the desired style of the gamer. If you want to be a stealthy spy, you can invest in skills and weapons suited to that ability. A more action-heavy gamer will want to buy heavy armor and kit Thornton out with some awesome, fully-customizable guns.

When it comes to actually getting into the thick of a fight, Alpha Protocol presents itself as a standard but competent shooter. It’s all third person with an over-the-shoulder perspective for gunplay, while stealth is handled with a typical “crouch, follow and take out” formula. When stealthily dispatching foes, you can choose between lethal and non-lethal methods, again adding to the choices that a player can make. A great non-lethal scenario discussed by Obsidian was setting up a “shock trap” with a stun grenade. You can stick a shock trap to the wall, then use a special noise generator to draw enemies to the desired location. Oh, and you can always sneak up behind someone, turn them around and punch them in the throat. Good times!

The feeling of choice is extended to boss battles. Some are optional, and their triggering depends simply on whether you choose to attack them or not. We were shown a fight against a Russian woman who Thornton had previously allied with, but turned on. As the fight progresses, the woman kind of gets turned on, as it becomes apparent that combat gets her engine revved. However, you come out victorious and can choose to kill her or make up with her. Obsidian chose “make up” and Thornton starts hitting on her. He says he’s a lover and not a fighter, to which she replies, “I’ve seen your fighting. Your love-making? Hmmm.”

The game can be compared to Mass Effect in a number of ways, most notably in the dialog system. Thornton can choose from a variety of “stances” when talking to people, which will determine how he interacts with the game’s many characters. He can be aggressive to people, he can bullshit them, and the more he talks to a person, the more he learns. When talking to the aforementioned Russian woman, the game let the player know that she was responding well to his aggression. Players will be able to use these hints to better craft their relationships, as well as look at their “Intel” menu screen to pull up dossiers on each encountered character, which flesh out during the game and can be full of useful info when talking to or fighting.

When not out killing, Thornton can chillax at his own private pad, which slowly gets decorated with memorabilia from characters and missions encountered during the game. From one of his several safehouses, Thornton can watch TV, where newsflashes detail his latest mission and describe the methods in which he chose to tackle them, depending upon how it was played. He can also read emails containing helpful hints, or silly jokes, such as one particular message from “Milflover.”

Graphically, the game is looking solid. There were a few bugs in this build, but it’s in the alpha phase and I expect things to look far better soon. The game appears to have taken the best parts about Mass Effect and Fallout 3 (dialog options, customizations, looting) while leaving out all the shit bits (everything else). Obsidian admits to being a huge fans of both those games and was inspired by them when creating Alpha Protocol and it shows.

Alpha Protocol has snuck up on an unsuspecting E3 to provide one of the most surprising titles of the show so far. If it lives up to its ambitious aims, this is going to be an incredibly hot title.