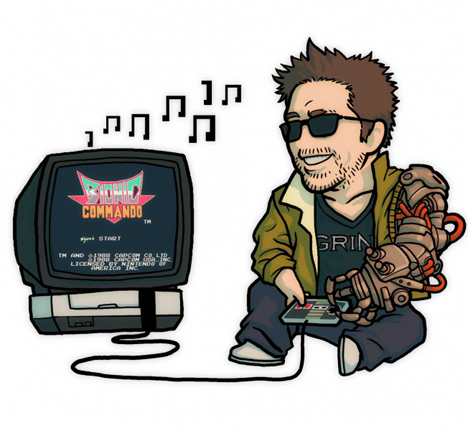 Simon Viklund is living the dream. Not only is he the composer for the upcoming 3D Bionic Commando title, but he is the composer and creative director of Bionic Commando Rearmed as well. With all that under his belt, Simon has cause to be a cocky, yet nothing could be further from the truth. In our discussions he repeatedly stated how humbled he was to be working on the first home console follow ups to the original NES Bionic Commando, a game that he has loved for most of his life.

Simon is doing everything he can to make these projects live up to Bionic Commando name, and his love for his source material really shows. As a result, the only thing more fun at the E3 08 Capcom booth than playing Simon’s games was talking to him about gaming, so much so that after conducting this interview on Day One , I popped in on him on Day two just to hang out.

Hit the jump for video of Simon’s BC cosplay and interview skills in action.