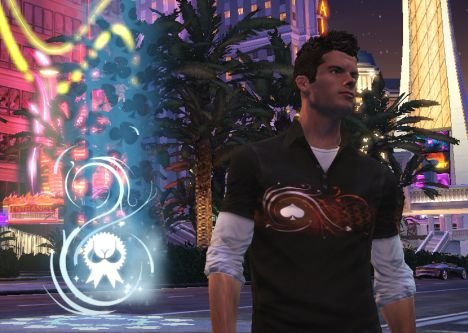 It’s become a cheesy, family-friendly, Disneyfied version of its former self: the days of drunks, awesome hookers, and mob-fuelled awesomeness have been replaced by crappy magicians and Mickey Mouse.

Thankfully, the guys behind This is Vegas seem to share in my irritation. Rather than existing in the Vegas in the real world, the city in This is Vegas is sort of a hyper-real fantasy: the Vegas we all wish existed, full of colorful characters, plentiful fisticuffs, and tons to do.

I was gonna put some sort of awful gambling pun here, but hell with it. Just hit the jump for my impressions.

This is Vegas attempts to meld sandbox, mission-oriented gameplay with what appeared to be many different kinds of minigames and tasks.  I was shown, and occasionally played through three scenarios: partying, fighting, and gambling.

The party mission was shown to us first, and, despite having a straightforward overall goal (“get 1000 party points”), it seemed surprisingly nonlinear as far as the player’s ability to reach that goal. The customizable player character could spend his time dancing via a rhythm-based minigame, pouring drinks in a Cake Mania-esque minigame, or beating up drunken frat guys who, by hitting on every single woman they meet, actively lower the party score every moment they’re allowed to roam freely.

Yes – beating up Bros seemed to be an integral part of the game.  This is Vegas already had me on its side.

The minigames seemed pretty straightforward, but the presentation made the actions more interesting than they might have otherwise been: after scoring  enough reputation points (represented by a little meter on the bottom-left corner of the screen, measuring how much the people in the area like you), the player can perform context-sensitive special moves by hitting the left bumper. If you’re fighting and you press the bumper, you knock a dude out with one punch. If you’re on the dance floor and you hit it, then the entire dance floor joins you in a synchronized musical performance, mimicking your exact moves and netting you a metric asston of party points in the process. The party scene felt like exactly what you’d want out of a hyper-real Las Vegas: silly and over-the-top, but pretty amusing.

I was really worried, however, that the minigames would get old pretty quickly. I asked the producer if the player would end up repeating the dancing and bartending minigames over and over and over throughout the course of the game. I was told that the player would definitely play those minigames several more times, but that each minigame would take place in a “different context.” I don’t really know what that means outside of the same minigame being copypasted into a different environment, and my worries remained. The party scene looked like it offered a lot of varied stuff to do, but would This is Vegas be crushed by the repetitiveness of its own minigames, a la Leisure Suit Larry: Magna Cum Laude? I can’t say for sure, until the full game comes out.

Next, we played a fighting mission. There are only two things you need to know about the fighting system: firstly, that it’s really simplistic (quick-tapping X does a light attack, holding it down does a power attack, Y is grab), and secondly, that you get to fight adult boy scouts wearing pink berets, and a dude who looks like a copyright-safe version of The Burger King. Allegedly, family-friendly corporate types are trying to invade Vegas and turn it into a watered down version of its former self, and Rat Pack-esque old timers  give you missions to beat the crap out of said corporate moguls and keep Vegas pure. The combat was pretty dull, but, again: I got to knock out a pseudo-Burger King with one punch.

Finally, we saw the gambling minigame, which was actually marginally more interesting than I expected (which wasn’t much, admittedly). The player is allowed to cheat in any gambling game at any time: to illustrate the mechanic, the producer showed us blackjack. By pressing the B button at any time, the player’s view turned ultraviolet and bright yellow marks appeared on all the cards. A dash meant a card value between 2 and 5, a circle 6 through 9, and an X meant a ten or an ace. Since you only get these ague hints as to what the next cards will be, cheating thankfully doesn’t guarantee the player a victory; there’s still strategy and luck involved.

Once again worried that the gambling would become too repetitive or gimmicky throughout the course of the game, I asked the producer if the player would be encouraged to gamble throughout, and if there would be a lot of stuff to buy which might inspire the player to gamble more. He replied that there would be a lot of clothes and toys and cars to buy, but I wasn’t quite convinced that these would really require the player to gamble as much as the game seemed to suggest players should – especially when, after mentioning that the player could use cash to buy special cars, he mentioned that you could simply steal any car you saw, even a mini cooper rotating on a show platform.  I was confused – if you can steal anything, is money only used to buy purely aesthetic stuff like wardrobe upgrades? And if that’s the case, why bother gambling at all? And why make a game called This is Vegas if gambling isn’t a huge part of it?

Overall, This is Vegas is either going to be incredibly immersive and awesome, deriving all its fun from its varied but entertaining minigames (like Pirates!), or it’ll fall flat on its face due to repetitiveness and lack of focus. What little I saw seemed really, really fun at the time, but still filled me with worry for the completed product. Either way, though, I’m very interested in the game and I’ll definitely be checking the full version out, if only to see how the designers handle the balance between a linear mission-based structure and the nonlinear minigame diversions.