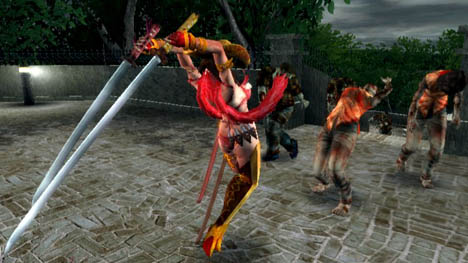 You already knew the concept for Onechanbara was great, but how about the new US name for the Wii title? Bikini Zombie Slayers? Yes!

D3 Publisher led me into a back room of their booth, complete with a beaded door and dimmed lights. They warned me of the “freaky mannequins,” but I wasn’t ready. Inside, I encountered two mannequins, both dressed with the actual outfits from the Onechanbara live-action movie. Naturally, I rubbed myself all over them.

They gave us a brief showing the upcoming Wii title Onecanbara: Bikini Zombie Slayers. The game is still in the localization phase, but we’re told that they’re not just porting this from the Japanese version. The story and game will see some upgrades, though no details were given.

The story is simple: Aya Imichi is taking a shower. Her younger sister Saki pops in the shower and informs Aya that zombies are attacking. And like any good sister, Aya jumps out of the shower, throws on some lingerie, and grabs her ninja sword to chop up some zombies. Oh, and the best part? This whole thing was set to Warrant’s “Cherry Pie.”

The game permits same-screen co-op, with players controlling either Aya or or Saki. The Wii Remote lets you perform slashing moves, while the Nunchuck lets you kick. Tons of blood fly with each slash, so much so that Aya’s sword becomes caked with it. When it becomes too thick, her sword gets stuck in zombies, leaving her vulnerable. There’s a sword-flicking motion that needs to be done, leaving a pile of goopy blood on the ground for zombies to tread through.

We were also told about a Rage Mode, which we didn’t have time to see. After a meter builds up form combat, Aya becomes “practically naked” with rage, and the blood spilling becomes unstoppable. It’s not fair to promise “practically naked” and not show it. You owe us, D3.

Of course, this game comes from the Japanese Simple series of budget games, and it really is simple. You can just pick up the Wii Remote and Nunchuck and flail your arms about to see a mostly naked girl slice up zombies. What else do you need to know?

D3 Publisher is aiming to release Onechanbara: Bikini Zombie Slayers on the Wii in early 2009. They haven’t set a price point yet, but they are sure it will be a “budget title.”