With our coverage of the biggest and brightest PlayStation 3 games, you probably thought we all forgot about the exciting new PlayStation Network titles that were shown at Sony’s E3 08 press conference. Well sir, we did not.

First up is Fat Princess, DarkStar Industries’ team-based arcade game. It’s your task to rescue the princess from the enemy dungeon. Sounds simple enough, right? Wrong! Your foes have overfed the princess in an attempt to make your mission that much harder.

In fact, Fat Princess‘s multiplayer is for 32-players (two teams of 16, head-to-head), as you’ll need all the help you can get to carry your overweight princess back to safety. 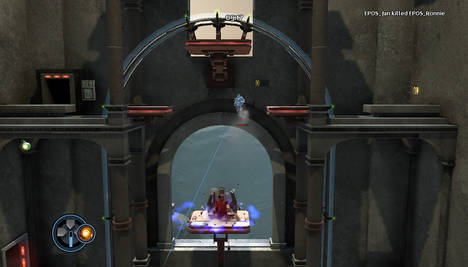 EPOS Game Studios’ Crash Commando is a side-scrolling multiplayer shooter for up to 12 players. Two factions of commandos, the Grunts and the Jarheads, are trying to annihilate one another or some such nonsense.

The game promises “slap-stick action” and “exaggerated gore,” as you can probably see from the screenshots below. As a commando, the weapons at your disposale range from machine guns to C4 to tanks for crying out loud.

Multiple modes will come packed with Crash Commando, as well as trophy support. And if you’d rather not play with 11 strangers online, there’s the option to play with/against bots. Horray for bots!