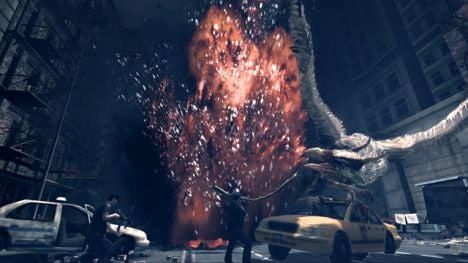 The premise of Legendary is as follows:

-You are tricked into opening Pandora’s Box.

-You have to fix, avenge, and/or kill said bad things.

If it sounds straightforward, that’s because it is: there’s some peripheral stuff about secret societies and hidden agendas and black ops military groups who exist only to pepper you with bullets, but the basic premise really just comes down to fighting mythological creatures in a contemporary environment.

I got a lengthy developer walkthrough and some sizeable hands-on time with the game. You can find my impressions after the jump.

Legendary feels kind of generic, but in a way that hasn’t really been considered generic for a decade or so. Where the current trend revolves around taking cover behind stuff and refilling your health by hiding behind a wall for a few seconds, Legendary’s mechanics feel like they’re straight from the 90’s, when running and gunning were favored over stop-and-pop. Legendary would be right at home in a time when games were reasonably (but not overwhelmingly) fast paced, breaking up their run-and-gun gameplay with occasional, startlingly easy “puzzles” and somewhat unnecessary cut scenes.

My demo started at the literal beginning of the game, where (in a cut scene, unfortunately), the main character is tricked into opening Pandora’s Box and the whole of Roman mythology breaks out and basically starts ripping civilians up and setting them aflame. Though the game is unfortunately cut scene heavy near the beginning (I was assured that the cut scenes become far less numerous as the game progresses), there were some pretty damn cool scripted sequences (like when a vortex opens up in the middle of an art museum, or when a five-story tall golem forms out of concrete and rebar and metal) that really made me wish they’d foregone the cinematics altogether and just integrated the story through play.

The majority of the game revolves around escaping from and killing mythical beasts – gryffyns, minotaurs, and the like – with modern firearms and a few limited magical abilities (basically “force push” and “force heal,” but without the “force”).  Nothing about the gameplay struck me as particularly noteworthy save for the scale of some of the situations , and the implied three-faction combat which supposedly fills the entire game after the first few acts.

It is truly quite a thing to see gryffyns flying through the streets of New York, picking up taxicabs and flinging them around, and I’m really looking forward to fighting the Kraken after it destroys Big Ben with a single yank of his tentacle. As straightforward as the actual shooting mechanics are, many of the ingame scripted sequences are just plain impressive. Think Cloverfield mixed with Clash of the Titans.

It was at this point when I took control, and made my way through a moving container jumping puzzle. Ignoring the fact that the jumping mechanics were abysmal (regular jump moves you about three inches in the air, but the long jump works like some sort of rocket-powered leap), the entire sequence was filled with “red herrings”.

I’d jump onto a moving platform and see a stationary one in front that it appeared I needed to leap to, but once I got there, there was nowhere to go and I was forced to redo about thirty seconds of gameplay to get back to where I was. This didn’t seem like such a bummer until it happened again, this time with a moving stationary platform it looked like I needed to jump on. Perhaps feeling my burgeoning irritation, the PR reps told me I just needed to stay on the very first platform I jumped on in order to reach my goal.

I didn’t play much beyond this point, but if that’s the sort of design philosophy on display for the rest of the game, then I presume Legendary will be a really, really irritating affair when you aren’t looking at badass scripted events.