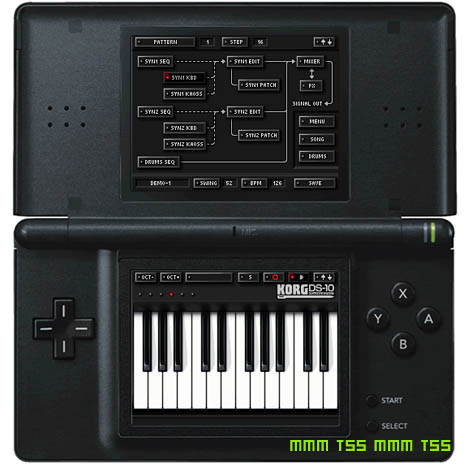 If you regularly read Destructoid, you’ll know that I’ve been band-geeking out over details and footage of the Korg DS-10 Synthesizer Music Creator for the Nintendo DS. This portable music maker was said to only be coming to Japan, but a few days before E3, XSEED Games surprised us by saying that they would be launching the title, and that it would even be playable at E3. I met with them for some hands-on time.

Straight up: Korg DS-10 is the geekiest thing ever to grace the DS screens. It is a software version of a classic musical synthesizer from the late 1970s, named MS-10. This synth is still used today for its edgy sounds by artists like the Chemical Brothers and JunkieXL. And, unless you’re some kind of music nerd/DJ/remixer like these guys, you’re probably not going to care about DS-10. In no way, shape, or form is this a videogame. It is a musical instrument, in software form.

That being said, if you’re still curious to what the DS-10 can do, and what kind of crazy music it can make, then hit the jump to read on.

The DS-10 has two analog synths and a 4-part drum machine, which means you can sequence full songs and performances in this software. I heard one of the included demo songs earlier, but it wasn’t until XSEED rep Doh showed off his compositions that I really wanted to try for myself. The first song he showed me was called “Neptunes,” named after the popular music production duo. He nailed the style, and I think the Neptunes would have been pleased. Among the others he showed off was his “Tetris Mix.” The sequence’s hardcore kick and searing synths made the appeal of this software to remixers immediately apparent. The sound of each of these songs is very analogue, just as the original synth was known for.

This software is full-featured and very flexible. Notes can be entered via a touch-screen keyboard or a grid matrix, and can be edited via touch-screen controlled knobs and a touchpad called the KAOSS pad. You can step sequence and make patterns, and then twiddle knobs to your hearts content, recording all movements. All of the parameters, like pitch, attack, decay, tempo, and more, can be edited by moving these knobs with your stylus, or assigning their values to the KAOSS pad. Just from my brief time with this, I felt that the DS-10 software could be amazing on stage.

I tried, very briefly, to sequence my own song. It sounded like ass, but I was still impressed by the power and flexibility of DS-10. The musical possibilities seem endless, but can actually be expanded by synching up other DS-10s.

As a musical tool, the DS-10 has no compare, on or off game hardware. For the electronic musician, this software is a no-brainer. For those just dabbling, I might recommend trying it out first. If you don’t understand patching oscillators and editing envelopes, DS-10 might be a bit confusing. Let’s hope that XSEED includes a good tutorial.

Be ready to make some noise with the Korg DS-10 when it launches in the fall of this year.