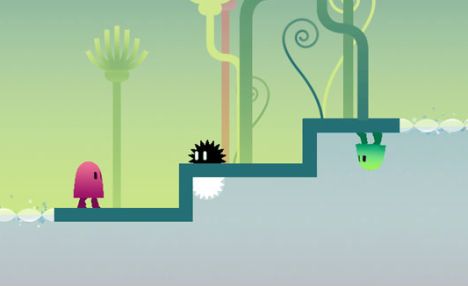 It was only a matter of time until I hit the IndieCade area of the E3 showfloor. After spending some time with the three high-profile titles I was looking forward to yesterday (Mirror’s Edge, Left 4 Dead, Fallout 3), it was time to go back to my indie-loving roots and see what the community came up with.

I started with Ibb and Obb, an unassuming game being demoed by a very friendly Dutchman named Richard Boeser. Though I assumed it was just a standard platformer at first, it turned out to be a pretty clever and entertaining co-op/gravity manipulation game.

Ibb and Obb is a co-op only game based around variable gravity. If that sounds weird, imagine a game where all the puzzles are designed to be solved by two players, and where a big thick line runs down the middle of the screen, separating the screen into two different hemispheres with their own unique gravity.

With sporadic openings between the two hemispheres, you can jump through one to the other and have your momentum propel you into a super-jump. Think of the momentum physics in Portal, only much more simplified: you’ll jump on your partner’s head, then do a massive leap into the other hemisphere, weave around some obstacles, and then launch triumphantly out the other side like a pebble out of a giant gravity slingshot.

Interestingly enough, this game (and be sure to take a good look at the header image before you continue reading this sentence) is an Unreal Tournament mod. The designer promised me that it was “a long story,” and I left it at that, but damn. I never thought I’d enjoy something even peripherally related to Unreal Tournament so much.

Other than the gravity mechanic, Ibb and Obb is pretty much everything you’d expect and want from a co-op game. There are certain gates that one character can go through but the other cannot, requiring a certain amount of strategic planning and forethought. I only spent about ten minutes with the game, but I definitely enjoyed myself: when Boeser told me he was in talks concerning the game coming to PSN, I was very pleased: the aesthetics definitely fit in with Sony’s past PSN games, and I’d have a lot of fun playing Ibb and Obb online.