Before I tell you about my hands-on time with Puzzle Quest: Galactrix, allow me to provide some essential information for you that will shed some light on how I feel about this series. A friend gave me the DS version of the original Puzzle Quest for my birthday last year. I played it obsessively until it came out for XBLA, at which point I played it every day for the next six months.

Do you know how freaking LONG that is to spend on one game, and a casual title at that? I’ve finished RPGs in less than half that time. With Puzzle Quest, it was a simple pleasure I got out of it — I enjoyed playing a handful of rounds a day because I found it relaxing and addictive. Because of how much fun I had with this game, I have a great deal of respect for it, and I was beside myself when I heard there would be a sequel.

Now that you understand the depth of my obsession with this series, hit the jump and I’ll tell you my impressions on the newest addition, Puzzle Quest Galactrix.

My first impression of Galactrix as my kind host at D3 showed me through the demo is that it appeared complicated — much more so than the previous game. Aside from the nwely modernized puzzle board, there were ships to control, galaxies which you could enter to find multiple star systems within, and tons of stats to manage. If you were attracted to the simplicity of Puzzle Quest, all these new additions may at first seem like a turnoff. What you are really seeing in the surface of a much deeper gaming experience, and I’ll explain more about how as I get into the details for you.

Let’s start with the board. As Chad mentioned in his coverage of the game’s debut at GDC earlier this year, the space age look of the grid is not the only change. Gravity now plays a role, so moving colored puzzle pieces to the sides will cause new ones to fill in from that direction. Instead of thinking vertically, you have to switch your perspective to be aware of how the board can change from all directions. It may take a little getting used to, but once you’re adjusted, it can open up a whole new dimension (cringe) of strategy. 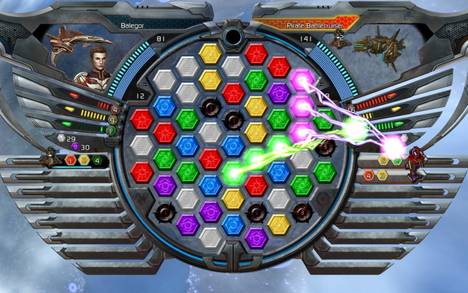 In addition to the old colors, you’ll see some new puzzle pieces in purple, blue and white that boost your shields, pump up your PSI power, and increase intel. The spells are back, renamed but still serving the same function — beating back your opponents. Instead of just having a basic hitpoints score, you instead can keep your shields high by matching the right colors, forcing the player to balance inbetween dealing damage, gaining experience and protecting themselves.

Unlike the old game where you pretty much barreled through the story to get to the battles, Galactrix has a lot more for you to do outside of puzzling. D3 described the new story as “still casual, but with a lot more to offer than the first game”. From the looks of it, that rings true already. At a glance you may think the pilot character you play has that same look to him that the characters from the old game did, but if you look at the character concept art in the gallery you will see the wide range of faces you are about to encounter and fight with (or against). 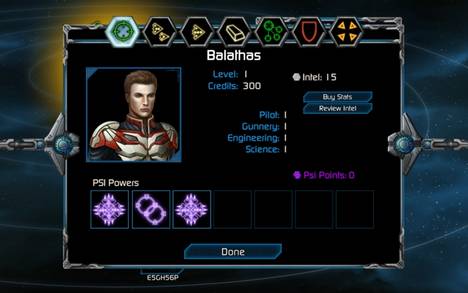 At a glance, the map of the star system you will play in looks about twice as large as the overworld map of the first game, and once you arrive at a destination, you can enter within and find multiple locales to battle in. I could be wrong, but it seems to me that this game is going to take a lot longer to finish than the first did. It seems like the options have been so dramatically expanded, it will keep a player’s hands full, which is always a good thing.

My take away from the short demo I played was that Galactrix is going to be a challenging sequel and that it will likely satisfy fans of the first game. I think people will have to adjust to the changes if they played a ton of the original, as I did, but once they do there is a lot there to reward you. It’ll be out this Fall for Xbox Live, PC and DS, so we won’t have long to wait before the overdramatic music can trumpet through our living rooms once again.