I want to marry this game.

I don’t know if that is legal or even morally right — ya’ know, marrying a videogame — but I would like to spend the rest of my life with Mega Man 9. Which sounds better? Mega Man Concelmo or Chad 9?

Anyway, sorry about the slightly perverted distraction. I was going to try to save my excitement for this Capcom masterpiece-in-the-making until after the jump, but I can’t hold back my adoration.

Obviously you know how I feel. Hit the jump to find out why.

Granted, I have not seen everything at E3 yet — Resident Evil 5 and MadWorld are behind closed doors — but as of now I am calling Mega Man 9 my Game of the Show.

Crazy, right? It’s 2008 and I am giving a remarkably 8-bit game — the ninth in a classic series — my vote for Game of the Show? What is wrong with me?

First off, if you are not a fan of retro games, this hands-on might not be for you. No matter how much I try explain how amazingly brave, yet stunningly beautiful Mega Man 9 is you will most likely never understand. Which is fine. I respect that. I just really wish you would give this classic homage a chance to win you over.

Unfortunately, only two of the eight Robot Master levels were available to play. Of course I was bummed about that, but there was so much goodness packed into just two levels that I had no choice but to walk away perfectly content. 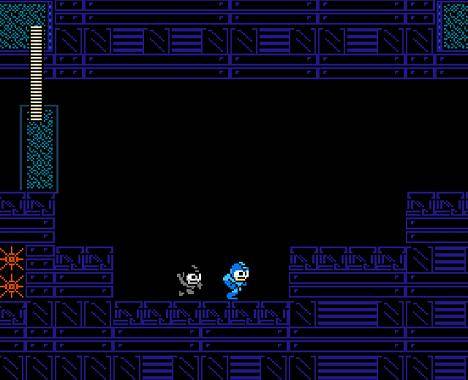 A lot of controversy has come from the 8-bit look of Mega Man 9. Some people (me included) are looking at the game as a work of nostalgic art, others (not me) look at it as a lazy effort that should have been upgraded to fit the technological standards of today. To those people, I say “YOU ARE CRAZY!” Okay, that was harsh. I apologize. But playing Mega Man 9 with such an old style of graphics is one of the main reasons the entire experience is so precious!

Even though it is almost impossible to distinguish the graphical difference in early Mega Man 2 with Mega Man 9, two small differences stand out that actually improve on the overall presentation. First and foremost, the 8-bit graphics of Mega Man 9 look remarkable when blown up on a high definition television. Unlike what happens when I try to hook up my original NES to a plasma, the sprites in Mega Man 9 are crisp and colorful with no blur to be found.

Also — and this is noticeable right away — there is no slowdown. While the early Mega Man games pushed the Nintendo Entertainment System to the limit, Mega Man 9 is obviously a drop in the bucket in terms of how much power it is pulling out of the console it is running on. Because of this, the game runs silky smooth, even when giant enemies are filling the screen! 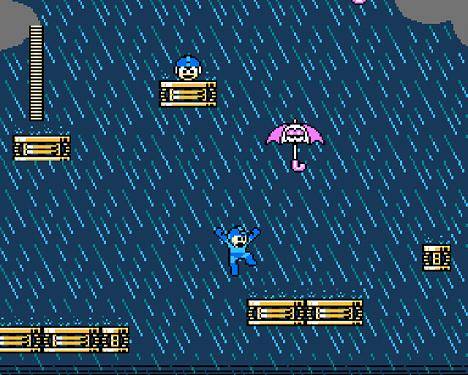 Mega Man 9 will eventually be released on WiiWare, XBLA, and PSN, but the build Capcom was showing off was the one for WiiWare. Not surprisingly, the Wiimote is help sideways to control all the action, with the 1 button shooting Mega Man’s blaster and the 2 button allowing him to jump. By pressing the + button, the weapons and energy tank screen is accessed. The first time I did this I was met with a surprise I had no idea was included in the game: RUSH!

That’s right; Mega Man’s robot dog companion is back in Mega Man 9. The demo I played only had the Rush Spring available, but a few different forms will make an appearance in the final game. Exciting stuff for retro fans everywhere! 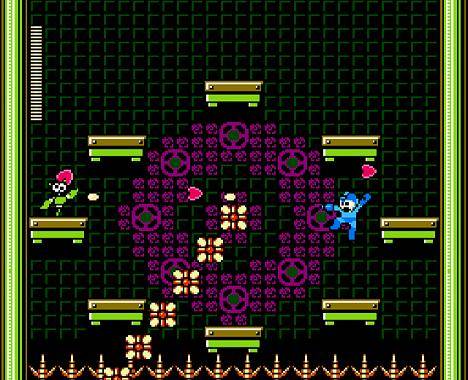 It goes without saying that the two levels available to play — Plug Man and Concrete Man — were hard. Really hard. In fact, I didn’t beat either level in the extended time I had to play (although I did make it to the very well-designed bosses). While this usually makes people angry and frustrated, it just made me love the game even more. Mega Man 9 is a humbling experience.

Of course, all of the normal retro challenge trappings are evident: enemies appearing in front of you the minute you try to jump across a bottomless pit, platforming sequences that would make even the most skilled gamer shed a tear. But, Mega Man fans, be prepared to be really happy: in Plug Man’s stage, the classic blocks that appear and disappear make a glorious return (including the classic sound effect). I think I actually giggled like a school girl when they showed up (even though I died numerous times trying to get across them).

Strangely enough, I actually felt that Mega Man 9 was the toughest Mega Man yet! For example, in Concrete Man’s stage, I encountered a giant mechanical elephant that shoots a large red ball out of its snout. Since its ball is indestructible, I had to jump in between it and the elephant in order to damage the enemy. Since the ball moves quickly back and forth, this was a pretty challenging feat.

After finally defeating the miniboss, I continued on, only to find another elephant on the next screen, this one with a ball that bounces! Laughing to hide my stress, I finally managed to destroy this second mechanical beast. Well, lo and behold, a third elephant appeared, this one more powerful, faster, and … over a bunch of bottomless pits! Yeah, it’s almost impossible to conquer, especially given the fact that you start at the beginning of the level every time you die! Like with all things in life, though: the bigger the challenge, the greater the reward. Getting past a sequence in Mega Man 9 is on of the most satisfying things I can recall in recent gaming memory. 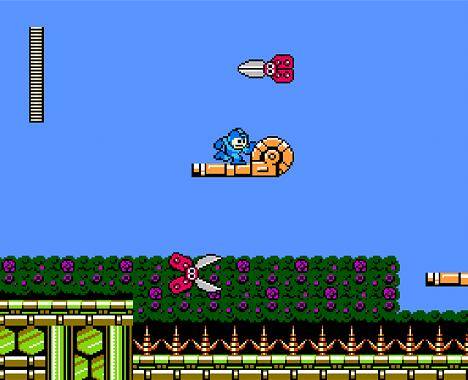 I could go on and on about how much I adored Mega Man 9. I don’t say this very often, but the game was a perfect experience for me. From the music to the level design, everything was designed with such courageous, artistic care. Playing Mega Man 9 is truly like going back in time almost twenty years and being a kid all over again.