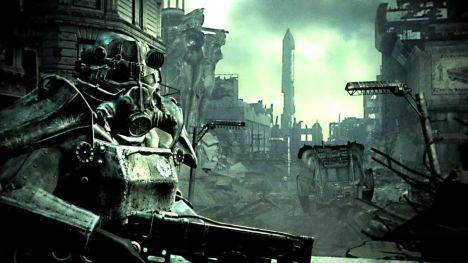 You’ve probably read a lot of Fallout 3 previews by now, but have you heard about blowing a female Raider’s head off while in the basement of a burned-out elementary school? Or shooting an automated propaganda-bot voiced by Malcolm MacDowell?

Because I did those things.

I did those things.

The first Fallout  is my favorite RPG of all time, and I was excited as hell to try out Fallout 3. Was I disappointed? This is usually where I’d say “hit the jump to find out,” but by this point it’s pretty obvious that I wasn’t.

Hit the jump to read a stream-of-consciousness recap of the half hour (which felt like five minutes) that I played.

I come in, watch a cute 50’s-style propaganda ad for the game, sit down, and am told I can’t talk about the character’s backstory (which I didn’t end up seeing anyway), the pictures on the loading screens (which I didn’t pay attention to), and the 360 achievements (which I didn’t care about).

I started inside Vault 101, right next to the exit. I was told if I went forward, I’d run into Megaton. If I went left, I’d end up in Springvale, where a “fun” elementary school was waiting for me.

Considering every Fallout 3 preview I’ve ever read greatly details the ins and outs of Megaton (there’s an undetonated bomb in the middle of the city, which you can set off in a side quest), I decided on Springvale.

Exiting the vault reminded me why, despite whatever complaints one might have with the way Bethesda handles Fallout, the epic first-person 3D RPG will always be better than 2D, isometric third person perspective. In the original Fallout, as you’re leaving the vault, some text tells you something like, “You see a bright light ahead of you. This is the first time in your life you have seen sunlight.” That’s well and good, but it’s nothing like actually stepping out of the Vault into pure whiteness, so bright and overwhelming that I momentarily thought the game had crashed. The whiteness slowly faded away, however, and I realized that my character, the vault dweller, was adjusting his eyes to a sunlight he’d never before been exposed to in his life.

So, Springvale. I show up, and a floating Enclave propaganda robot (remember them, from Fallout 2? I guess they’re still around) was floating around, spewing out inspirational speeches from – is that who I think it is? – Malcolm MacDowell! This can only lead me to believe that he’s probably the end boss or something (why would you ever include Malcolm MacDowell in a game and NOT make him the end boss). I left the bot alone, searching for the elementary school.

I got lost, and ended up in a small house. A young woman with white hair came out, asking if a nearby gangster from Megaton had sent me to collect her debt. I told her no, that I was just looking for my dad, that I didn’t want any trouble, and that I would take her money to the gangster for her so she wouldn’t have to risk it. She thanked me and gave me all her bottle caps.

Then I shot her to death.

What? Don’t judge me.

I wanted to see if, as was the case in the original Fallout, you could kill any character at any time. And, if that poor woman was any indication, you can.

I found it, entered it, and was pleased (if frightened) to be immediately greeted with gunfire from a Raider on the second floor of the foyer. It was at this moment that I got to experience the hybridized FPS/turn based combat on display. Of course, I was too excited to actually activate the VATS system, so I just shot at him a lot in realtime first person, chased him around, and shot him some more until he died. Pretty standard, but fun and immersive.

Also, I’ve got a Nuka Cola. Just throwing that out there. I’m looking at it right now. If I drank soda I’d down that crap in a second.

I get to the basement of the elementary school, and am ambushed by another Raider, this one female and wielding a knife. She rushes toward me and, looking down at the little card in front of me, find that the right bumper starts the VATS system. I activate it, and time freezes. You probably know how it works by now (time freezes and you use action points to target specific parts of your enemy’s body). When I heard about this, I assumed it would be an alternate way to play through the entire game: those looking for a modern experience could play it in realtime FPS style, I thought, while purists could just stick to the VATS system.

In reality, it’s far more likely that every Fallout 3 player will have to indulge in a bit of both. The VATS system is so useful, and so deadly (once you get within a reasonable distance of your enemy, headshots can have a 75% chance of connecting, with a pretty hefty chance to cripple their eyesight), that it almost becomes a powerup – like bullet time, almost. I used all my action points to pump the Raider’s face full of 9mm lead, and after a slow-mo animation showing my character fire multiple times at her, I watched in glee as my final bullet scored a critical hit and her head flew off.

Like someone had whacked her in the neck with a katana.

My mouth was agape in horror, but also enjoyment.

I fought many more Raiders and eventually made my way to Megaton (stopping to blow up a propaganda bot on the way: they only take a few shots to destroy, and they have no defenses). I unfortunately spent so long roaming around the wastelands, trying in vain to find Megaton and fighting all manner of huge radioactive bees and rabid dogs and hockey mask-wearing raiders (his head DID explode, sending an eyeball in one direction and half his skull in another) that by the time I got to Megaton, I only had about five minutes left to play.

I entered Megaton, tried to find the mob boss’s bar in order to kill him and avenge her death (it still counts as avenging her death even if I’m the one who killed her), and found the front door locked (thus making it the least patron-friendly bar in history). Trying to pick the lock initiated a little lockpicking minigame, which I was in too much of a hurry to read the instructions to (it didn’t look all that enthralling). I had the option to force the lock open at risk of breaking it. So I forced it. And it broke. And I couldn’t get in.

With only two minutes left of playtime, I ran frantically around Megaton trying to find someone to kill in a hilarious way.

That’s when I ran into an adorable, elderly woman who was the wife of one of the town guards. After some very amiable conversation, we said our goodbyes and I shot her in the face with my hunting rifle.

She survived, unfortunately, and ran away as the rest of the town guards came to rip me limb from  limb. Frequently giving myself stimpacks to heal myself (up on the d-pad), I chased after her, lusting for blood. I shot her in the leg, hoping to cripple her. The bullet found its home, but she kept going. I initiated VATS. Aimed for her head. Fired.

I let myself get gangraped by the guards after that, because I knew there was no way my play session was going to get any better.

I know I didn’t really experience the nonlinear RPG aspects of the game – you know, the things that Fallout is really known for – but I now sure as hell know that the combat mechanics are, if not identical to those in the original Fallout games, really goddamned fun.