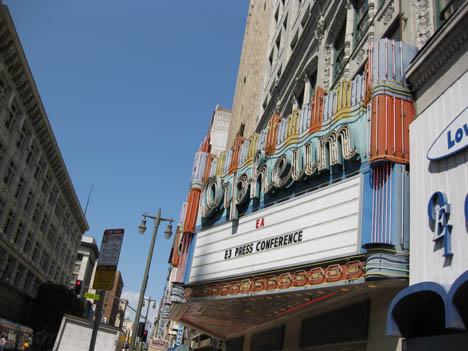 We’re here at EA’s press conference in the Orpheum Theater in Los Angeles.

I’m sitting waaaaaaay up in the balcony, liveblogging this for you. Thanks to Jonathon Ross for helping me out here! I was late. Damn your little sandwiches, Square Enix.

3:10 Rod Humble of The Sims Studio is speaking now.

3:11 Rod talks about Sim Animals, with deer and bears and wolves.  Starts playing the trailer.  Has a giant floating white hand pick up a bear and wave it around.  Now a bear is chasing a squirrel.

3:13  The game is very simple and easy.  You pretty much pick stuff up.  You can make animals have sex by dropping them on each other.  SimAnimals set for January 2009.

3:14  Talks about the Sims 2 Store where you can buy and download items into the game.  Sims 3 will be coming in 2009.  Will let you customize any object in the whole game.
3:15  They’re claiming that Sims 3 will have the most complex characters ever.  The game is going to model contingency.  Trailer being shown, “contains content not suitable for children.”

3:16 I think I saw an obese sim in the trailer.  I guess that’s part of the updated realism.
3:17 Glen Schofield from EA Redwood Shores is on now.  He’s a guy working on Dead Space.  They’re pushing hard on the horror element.
They’re doing away with the HUD entirely.  Health is displayed by lights on the back.  Ammo shows up when you aim.  The inventory system is “in game” – supposed to be things Issac (the main character) can see himself.

Just a bit ago, we saw Dead Space on the huge theater screen. My God, this game looks amazing this big. I wish I could play it in this theater! This will launch October 21st.

Now we’re looking at Mirror’s Edge, on the same massive screen. I’ll snap some shots for you and upload them in a bit. We’re watching live gameplay, seeing one of the first levels of the game.

Hit the jump to read more.

3:30 – They’ve moved to a new trailer, showing all new levels. Jesus, the lighting in this game is outstanding. I’m sure this new trailer is going up soon. Much applause.

3:31 – Will Wright is now here on stage, talking about Spore.  He’s talking about his love of chemistry sets when he was young. He wants this game to be a mix between creativity and science. The Creature Creator has topped the download charts, according to NPD. They were hoping that, by the time they released the game, people would have creatures ready to rock. They were hoping for 100,000 creatures uploaded by launch. They did that in 22 hours!

They passed a million in about a week! In 18 days, creators exceeded the number of known species in the world. He likens players to God.

3:43 – Peter Moore takes the stage, talking about EA Sports titles. The focus is on NBA Live 09. He’s talking about “dynamic DNA” now, the tech actually used by the NBA. This game will update daily in-game, all season long. We’re seeing a first gameplay video showing this technology in action.

3:54 – Moore wants to make their games more accessible to sports fans. You’ve probably heard about the All-Play titles already, and now the LPGA’s own Natalie Gulbis takes the stage to show off Tiger Woods PGA Tour 09 with Peter Moore. You may have seen her reality TV show. Moore is playing as Tiger, of course.

We’re watching them play against each other. See a picture in the gallery below. Moore is winning against a pro.

Five games coming this summer and fall in the All-Play series.

4:01 – Now John Pleasants takes the stage, who heads up publishing and online operations. He’s talking about accessibility in games. He introduces Nanea Reeves, who runs the online group at EA. She talks about Nucleus, your online profile across EA games. It goes across consoles and genres. They’re showing off microtranactions. By the end of next year, 25 titles will support Nucleus.

Mr. Fanning is talking about Rupture now. It’s EA’s achievement tracker. They’re now showing examples, and say that users can set their own custom achiemevements for friends or other players. They say any developer can use this to include their titles.

4:08 – Travis Boatman takes the stage to talk about mobile, focusing on iPhone apps. They want to use touchscreen and accelerometer functions of the device to make their games. Scrabble will use the accelerometer to shake titles. Scrabble will be playable over Wi-Fi soon.  3D titles will be coming soon, including Tiger Woods and Need For Speed.

4:14 – Gabe from Valve continues the parade, now talking about Left 4 Dead, the multiplayer co-op horror game. He’s going over how the game will change every time, thanks to the Director programming. We’re watching an encounter where all four players suck. They’re shooting each other and missing shots. The game becomes a bit easier for them. Now we see the same scene, but each player is now kicking ass. It’s way more dramatic than the last, which rewards better players.

4:20 – EA Partners program is being discussed. They cite Rock Band and Crysis as successes. They’re announcing a new partnership. John Carmack of id takes the stage to talk about this. He says that the partnership is perfect for independent developers. His new title Rage is will be shown at QuakeCon, but we’re getting to see a preview now. We’re seeing desert footage where a dune buggy is driving through. Visuals are lovely. It’s a cross between horror, action, and driving. It uses “id 5 tech,” whatever that is.

4:24 – They finish up with the mega-trailer, which combines all their properties together with really loud music and flying titles. Wooosh! Seriously, this is the loudest thing ever.

Lights come up, and we’re done!