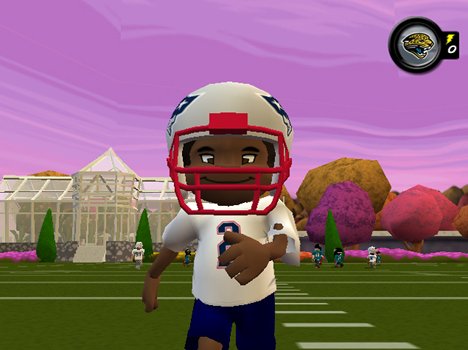 There’s a certain nostalgia involved in the idea of meeting up with the neighborhood kids and tossing around the ol’ pig skin. Backyard Football 2009, the newest edition of the best selling kids’ football game, takes a fun-sized approach to the NFL by featuring famous players in their child-like form. Tom Brady is no longer the hulking football superstar that you know today, but the cute little kid with a great throwing arm.

Backyard has everything you’d expect from a football videogame placed within the context of a friendly neighborhood 7 on 7 game. Super stadiums are replaced with locations like a school field, a farm, or even a castle courtyard. Players can choose from all 32 NFL team uniforms and logos, with at least one pro kid player from every team. Once teams are formed, players can choose between single game or season mode, or play in two player mode with another person. Finally, while playing stats will certainly help you choose the best players for your team, each player has a happiness level which will also help determine how they’ll perform on the field.

With fun environments and power-ups paired alongside NFL action, Backyard Football 2009 looks to be a casually fun sports game that’s mainly for kids but may rouse some youth inspired competition for older gamers. The game will be available on the Wii, DS, PC, and PS2, and is expected to be released this October.