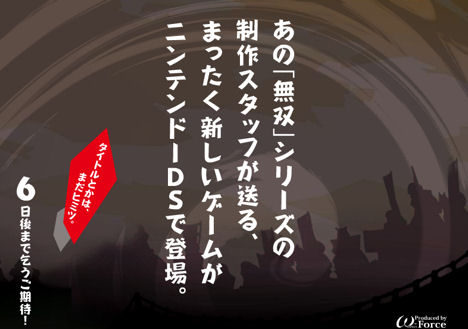 Koei’s in-house Dynasty Warriors development team, Omega Force, has launched a Web site promoting a new mystery game for the Nintendo DS. Of course, we use the term “mystery” loosely as even without the above teaser image, one wouldn’t have to think too long and hard before guessing it will involve medieval Asian soldiers in some way.

Anyway, the game is set to be revealed in six days if the countdown is anything to go by. I expect roughly 5% of you to care, and 100% of me to not care if you care, because I’ll run the story regardless. Screw popular opinion.