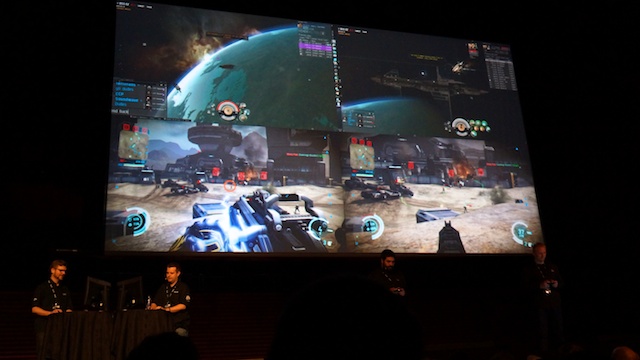 During tonight’s keynote at EVE FanFest in Reykjavik, Iceland, fans roared in applause after seeing a destructive strike from space, sent from players in PC MMO EVE Online, come crashing into the world of upcoming PS3 free-to-play MMO FPS Dust 514. This was the first time that CCP Games has shown off gameplay of their new shooter, and from the buzz here at the event, fans are intrigued.

The keynote kicked off with CCP’s Brandon Laurino and Atli Mar taking the stage with PS3 controllers to show off Dust 514‘s interface and gameplay in a split screen format, revealing a deep customization and skill system not unlike EVE Online‘s.

A bit later, two more CCP staffers joined the stage on PCs playing EVE to show off these strikes from orbit, opening up the stage for a huge four-way projection. This strike had beams raining down on an enemy gate, opening up the way for the Dust players to proceed with their mission. The fans in attendance liked it so much that CCP called for a secondary strike, which was also met with applause.

Calling in a strike is fairly common in shooters, but having that strike come in from people playing a completely different game on a different platform changes so much. This is some futuristic stuff!

Look for more coverage on Dust 514 and EVE FanFest later this week.