Denis Villeneuve’s adaptation of the 1965 sci-fi novel Dune went live in theaters and on HBO Max this weekend. But the silver screen isn’t the only medium that’s tried to bring the dunes of Arrakis to life. Dune‘s legacy in video games isn’t just notable, but groundbreaking in some respects—and a bit dramatic, too.

The last time we did this, around the premiere of Evangelion‘s Thrice Upon a Time, we dove into a line of visual novels, multimedia discs, and even a hidden gem of a Nintendo 64 game. The gaming legacy of Dune is a pretty remarkable one though, at least for one company in particular: Westwood. But let’s start at the beginning.

Going back to Dune

There are, by a general tally, five licensed Dune games. There are also several board games, role-playing games, and even MUDs (a.k.a. Multi-User Dungeon) of Dune. But the commercial video game legacy of the books kicked off with 1992 game Dune. Well, one of them.

Developed by Cryo Interactive, Dune (1992) was released for MS-DOS and Amiga, and later came to Sega CD in 1993. It was one of the first floppy format games converted to CD, and this version included footage from the David Lynch adaptation, voice acting, and 3D-rendered scenes. It’s based on the original novel, following Paul Atreides as his family is given the fief of the desert planet Arrakis by the emperor. You’re tasked with managing relationships, both with local Fremen and the rival faction, Harkonnen.

It’s a mix of point-and-click adventure and real-time strategy, with both aspects playing into the success or failure of House Atreides. It’s pretty ahead of its time, with its mix of politics, dialogue, exploration, and strategy bringing to mind games like Divinity: Dragon Commander.

It had a reportedly troubled development, and ultimately, found itself in competition with itself. Because Dune (1992) was not the only 1992 Dune game. All the while, another company was working on its own version of Dune, that also looked to strategy for inspiration.

To command and conquer

In December 1992, Westwood Studios released its own Dune video game under several different names. Known as Dune II: The Building of a Dynasty, Dune II: Battle for Arrakis, Dune: Battle for Arrakis, or just simply Dune II, it was also based on Lynch’s movie adaptation of Frank Herbert’s sci-fi novel.

In Westwood’s version, the player takes control of one of three houses: Atreides, Harkonnen, and the Ordos—that last one being a new addition for Westwood’s game. The goal is to take control of Arrakis from the other two houses by harvesting spice and building up cash, eventually funding an army to crush the enemy.

If it sounds familiar, well, that’s because Dune II was essentially the blueprint for many real-time strategy games to come, including Westwood’s Command & Conquer. 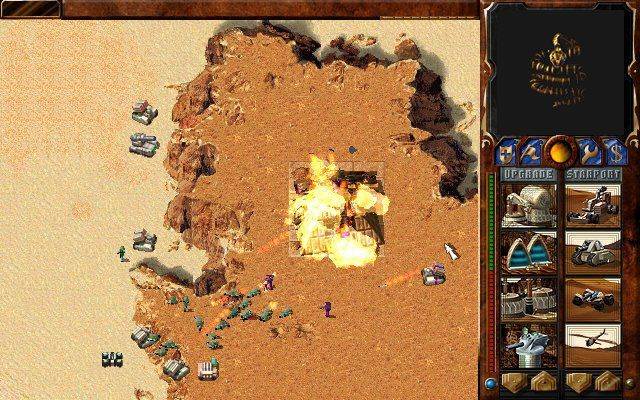 In a feature on the making of the game in Edge, Westwood co-founder and Dune II producer Brett Sperry credited a few sources of inspiration: partly Populous, party his work on Eye of the Beholder, and most crucially, an argument he once had with Strategic Simulations vice president Chuck Kroegel. Wargames “sucked,” as Sperry said, because of a lack of innovation and poor design. He recalls Kroegel saying the category was a in “long, slow decline” as players moved to more exciting genres.

“I felt that the genre had a lot of potential—the surface was barely scratched as far as I was concerned, especially from a design standpoint,” Sperry told Edge. “So I took it as a personal challenge and figured how to harness real-time dynamics with great game controls into a fast-paced wargame.” The result was the real-time strategy game, something experimented with already by 1990’s Herzog Zwei, and now codified in Dune II. The game would become a success, leading to a semi-remake in Dune 2000 and Emperor: Battle for Dune in 2001.

It would also lead Westwood to create the Command & Conquer series using a similar design philosophy, and it became a pivotal game in the PC strategy space.

Cryo Interactive, however, was not done with Dune. The developer would return to Herbert’s sci-fi novel in 2001 with Frank Herbert‘s Dune. It was based on the Sci Fi Channel miniseries from 2000, and opted for an adventure game setup in 3D, following Paul Atreides’ efforts to win over the Fremen and take down Baron Harkonnen.

It arrived in the midst of troubles for the studio, and sadly, Cryo began to slowly fold and dissolve not long after the launch of Frank Herbert’s Dune. As its subsidiaries and studios closed, it took another Dune game with it: the ongoing project Dune Generations.

Though fan-created legacy versions of these older games and mods for other games keep the Dune spirit alive, the sci-fi series’ video game future is nebulous. The work to bring Dune back to the gaming space is underway, though it remains to be seen what shape that will take or when.

Yet despite an absence in recent memory, the Dune series’ video game adaptations left a permanent mark in the games industry. From a sincerely fascinating adventure-strategy hybrid to becoming the blueprint for a new genre of strategy entirely, Dune‘s mark on games can still be seen today, even if it’s just in modern remakes of its successors. And hopefully, someday, we’ll visit the virtual dunes of Arrakis again.

Screenshots and promo art courtesy of the MobyGames archives.