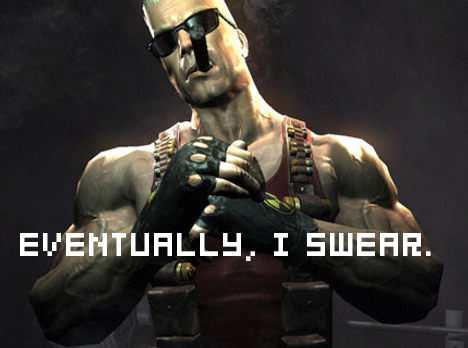 Last night, we reported on the rumor that Duke Nukem Forever would not be shown at E3 this year. In an unpredictable and crazy turn of events, vice president of 3D Realms Scott Miller has confirmed that the title will not be shown this year by blasting the outlet and its reach to Next-Gen:

It’s just that we view E3 as irrelevant nowadays. In fact, I wasn’t even aware it was coming up.

Someone should probably swing by 3D Realms’ office and circle their calendar right fast. On another front, when asked how the development is going, Miller replied with this:

Is that a second confirmation that someone has actually touched a keyboard in conjunction with the development process within the last few weeks? I’m all for an awesome Duke Nukem experience, but these delays and quotes are a bit grating on the nerves after awhile. The fact that someone at 3D Realms is willing to talk, or show off the Duke, is validation that at least something is going on in the office. Whether it’s baking cakes or developing, we may never know.

Honestly, I just want to interact with strippers in a FPS again. Please hurry, 3D Realms.