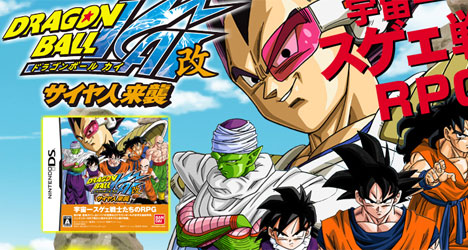 All you Dragon Ball fans can rejoice, for already are there videogames being worked on for the series. The franchise reboot has already kicked off their ancillary marketing campaign by announcing this upcoming DS title from Monolith Soft, the company behind the Xenosaga franchise.

For those of you wondering what the hell Dragon Ball Kai is, check out Japanator more often. But, to give you a short version of the story, they’re going to be rebroadcasting Dragon Ball Z in HD over in Japan starting next month, and the show will be re-edited to follow the manga’s storyline more closely. So that means all the filler that’s stuck in there? Cut out. They’re even bringing in the original voice actors to re-record a bunch of lines for the show. I’m rock hard over this, just so you know.

The title will take place in the Saiyan saga, which means the series will culminate with the battle against Vegeta. Until then, you’ll be able to run through all sorts of adventures, following closely to the Dragon Ball Kai storyline. So, don’t expect anything too new in the story.

There’s not much on the game itself, other than this trailer, and so I have a feeling the title will be…less than inspired. Right now, it’s got a more-than-typical worldview setup with the classic J-RPG battle lines. I have a feeling this one won’t be making it over as a “must have” title.

Check out the trailer after the jump.