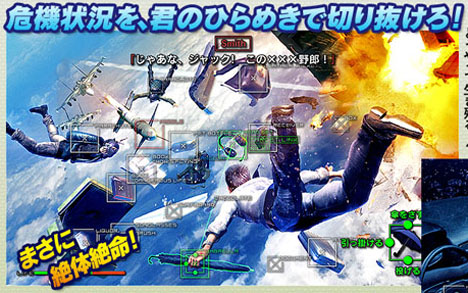 Apparently, some images from an upcoming issue of Famitsu magazine were recently leaked. Ordinarily, this would not be that big of a deal, but the amount of confusion and mystery surrounding these images makes them stand out.

Much discussion has been happening at NeoGAF over these scans. Multiple theories have been circulating as well as a few translations of the actual image text. Other sources indicate that these new IPs are being developed by the Sony/Namco Bandai game studio, Cellius. If this is the case, then the PlayStation 3 just got a whole lot sexier.

For all we know, all three games (Brave Arms, Chain Lim!t, and Second) could be a hoax or maybe even a marketing pitch. The cost of game development would make it very hard for a company to work on three next-gen titles at the same time, so narrowing it down to one game by way of pitch would make sense.

On the other hand, the pictures could be complete fakes. This wouldn’t be the first time a magazine scan was “leaked” online only to be later declared a mock-up by some all-knowing Photoshop God. Think about it though, why would someone go through this much trouble to make convincing images as well as detailed descriptions of each game? That logic is beyond me.

Translations for these images can be found after the break.

BRAVE ARMS
Brave Arms is a 3rd person adventure in which you seemingly have no ranged weapons, so you attack by getting in close and fighting at ultra-close range with context-sensitive attacks. You can see a “guide line” of your enemies’ attacks that tells you what they’re about to do and if you react with proper timing you can counter it by pressing the Juggle Button at the instant it would hit you. So it’s about getting in close, then it becomes a context-sensitive fighter. It sounds quite similar to Cipher Complex, actually.

CHAIN LIM!T
CHAIN LIM!T uses the Target Link system, which is SORT of similar to QTE, but far more advanced. It looks like you use the two sticks; the left stick chooses areas you can interact with in the environment while the right chooses your action. In the middle shot of the first page, the guy is choosing “Bite” and the tape on his girl’s pants. But he could choose to throw some other object or combine two other objects or whatever. Not exactly a linear QTE sort of thing. In the airplane engine thing, we’re seeing three scenarios. One where it looks like he dodges a falling box that hits the guy holding his legs, one where he messes up and dies, and one where he selects “remove” while targeting his own belt to drop his pants along with the guy holding them. So theoretically, you can choose any option at any target point, giving you 20+ possible actions. So instead of simple QTE multiple choice, you can combine your options in creative ways.

SECOND
Second is an investigation/adventure game with multiple game modes. One is exploration, one is shooting, and one is selecting voice responses in realtime, which is very similar to Indigo Prophecy. The modes can happen on top of each other, so you can have gun shooting while choosing voice responses. So in the shooting scene they show, you can either blow the target away with your gun (by physically doing it, not selecting it as an option), or try and negotiate with him by selecting your dialog. You can always change the camera with the right stick, and the options/voice commands change based on what you’re facing.

What do you make of all this nonsense? Are you up to the challenge of playing Sherlock Holmes for the day?