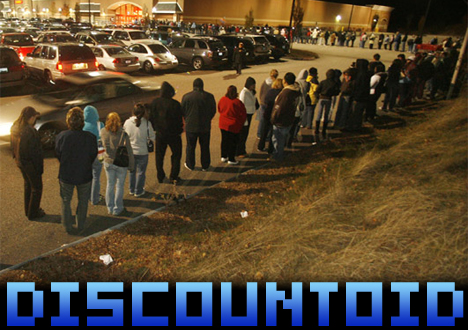 I love the smell of commerce in the morning.

Ever since I first started working in retail all those years ago, Black Friday has been my favorite day of the year. The lines of people banging at the gates, waiting to consume en masse, willing to do just about anything to save some cash on their holiday shopping, fill my soul with something I can only identify as patriotism. The raw energy of the day is just thrilling. I’ve never once shopped on that day, however. That could be suicide.

For those of you braver (or just more patient) than I, I present to you this year’s roundup of smokin’ hot Black Friday deals. Click on past the jump and observe the glory. And, just for fun, I’ll give you some trivia on the most American holiday of them all.

Here’s my picks for the best deals this Black Friday. Several retailers (such as Wal-Mart and Toys R Us) have negligible offerings at best and have been left off. If you want an exhaustive rundown, visit our friends over at Cheapass Gamer, where they have a fantastic list of everything the retailers have on sale.

FUN FACT: While “Black Friday” has become popularly known as the day in which retailers finally become profitable for the year, that’s not where the term actually originates. Police in Philidelphia coined the phrase to describe the heavy traffic on the day. The term was first applied in 1966.

Buy 2 Get 1 Free on all Used Titles

FUN FACT: Most people believe that Black Friday is the biggest shopping day of the year. This is rarely the case. The most successful day for retail (both in terms of sales and traffic) is, traditionally, the Saturday before Christmas.

FUN FACT: In 1939, while the US was caught in the grip of The Great Depression, retailers desired an extension of the holiday shopping season to improve profits but did not want to change the practice of the post-Thanksgiving sales marking its start. To help them, President Franklin Roosevelt moved the date of Thanksgiving forward one week, amid much controversy.