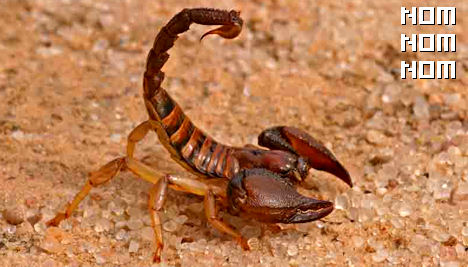 In case you didn’t know, Deadly Creatures is a Wii game which features a spider and a scorpion as its main characters. It also has Dennis Hopper in it. Lead designer Jordan Itkowitz has been chatting about how his team got into the spirit by bringing all manner of bugs and insects into the office.

“People were bringing bugs in all the time,” he explains. “This guy brought in a mama wolf spider with hundreds of little babies on her back. It was in his backyard, and he just picked it up. And some jackass left a couple of dead scorpions on my desk one day on a fly trap.”

Then there’s the bit where they ate insects: “We found a Mexican restaurant in Phoenix that serves Chapulinas, which are fried grasshoppers. Chapulinas are kind of nutty, kind of crunchy. Better than giant Thai water beetles but not as good as fried mealworm larvae. Yes, this is speaking from experience… It was so we could really get into our characters’ heads.

As if that wasn’t enough, one developer got stung by a scorpion in his kitchen. I think this game is made by people who aren’t mentally well.