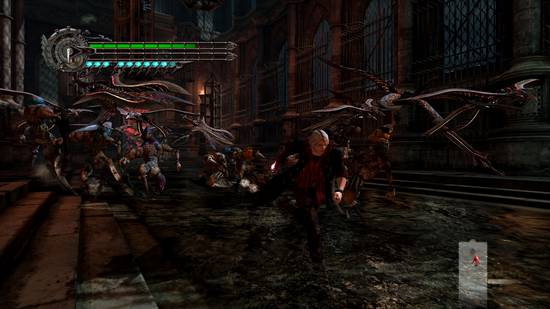 Who says PC gaming is dead? Not Capcom, as they’ve announced Devil May Cry 4 will be coming to PCs this summer. The game is said to feature new modes, enhanced graphics options, and “some additional content.”

The newly added “Turbo Mode” will simply speed up the game’s action to “insane speeds,” and the “Legendary Dark Knight Mode” is an increased difficultly mode that will fill the screen with an “unbelievable number of enemies.” Additionally, enemy placement seems to have changed a bit, as Capcom is saying that familiar enemies from the console version will appear in different and unexpected areas. The game will support both DirectX 9 and DirectX 10, and will run at a ridiculous 120 frames per second, provided you have the rig to support it.

A  demo for Devil May Cry 4 — including a system benchmark mode — will be available for the PC before the game ships.

[Just for poops and giggles, I checked in with Capcom to see if console gamers could be expecting any updates that might include either the “Turbo Mode” or “Legendary Dark Knight Mode.”

“As of now, there are no plans for the PC-exclusive features to be features on the console versions,” I was told.

I was also told that while it’s not planned, it may also still be a possibility in the future. Who would want to play those modes in 30 frames per second anyhow? That’s so two months ago.]