Deus Ex: Human Revolution‘s release is still too far away for anyone’s liking, but this latest trailer shows some more Xbox360 gameplay to keep us happy. Happy enough to make us feel better about Warren Spector and Harvey Smith not being attached to the project? Who knows.

While it is nice to look at, this trailer has a lot of little things to go over. A Q&A with Jean-Francois Dugas at Eurogamer provides a couple extra pieces of information, so I am going to integrate that with what’s in the trailer to give you the best analysis possible.

(0:14) Either silenced pistol headshots are instant kills if you shoot an armored soldier in the shoulder, or this trailer build had his pistol skill maxed.

(0:19) Adam Jensen can either “warp” through ceilings, or he can dampen falls from great heights using some kind of energy projection field.

(0:21) Ducts still seem to offer optional routes and they are even highlighted (if you aim in their direction), in case you are blind. 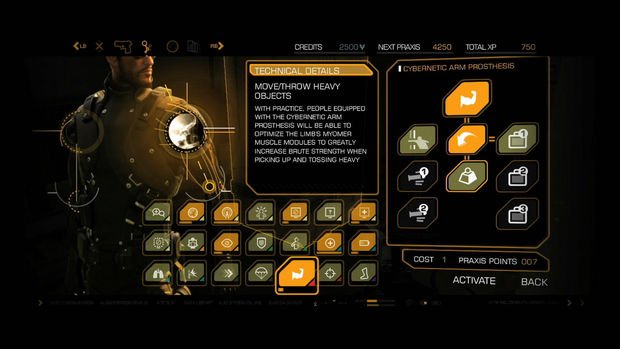 Praxis Points seem to be the game’s XP system for upgrading augmentation devices, which each have different skill trees to level up. Dugas says that “You earn Experience Points for every mission you complete, every secret you discover, and various other meaningful actions you take.” These experience points in turn unlock Praxis Points. Interesting.

21 augmentation devices are shown. The menu doesn’t seem to have augmentations for specific body parts like in the first Deus Ex. Instead, everything is handled through one big menu. The augmentation devices have different colors in the bottom-right corners of the selection icons. Green seems to be damage resistance, something about health, and battery/energy recharge rates. Yellow seems to indicate hacking and other informational types of skills. Red seems to be all about melee and ranged damage.

(0:22) The “Social Enhancer” augment seems to provide feedback on what kind of responses you’ll get from picking certain conversational choices. It offers one upgrade from the looks of it, with a shattered brain icon. Perhaps it unlocks a “confuse” skill of sorts?

(0:23) MHD-995 Hacking Device is the primary hacking augment. The skill tree for this device on the right shows us upgrades for leveling the device (decreasing hacking time probably), disabling cameras, hacking robots and finally hacking turrets.

(0:23) A cloaking system turns you invisible. It has three upgrades for becoming more invisible, I guess.

(0:23) A strength augment shows a number of different things. At the basic level, you become “stronger” and it lets you throw and move heavy objects. But the skill tree also hints at being able to punch through walls, moving and throwing heavier objects, carrying more (?), and offering more bullet resistance.

(0:32) Adam enters a vent after pushing a heavy object in front of it and turns on some sort of x-ray vision mode.

(0:34) Adam mysteriously appears crouching in front of a door. That must have been an awesome vent! 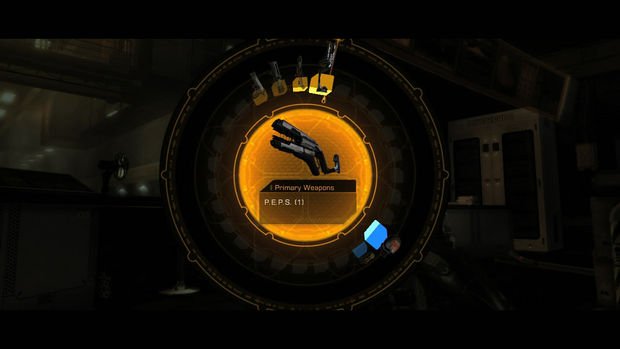 (0:35) Four weapons are shown, three of which have names: a 10mm pistol, unnamed assault rifle/shotgun, Laser Rifle, and P.E.P.S., which is a “non-lethal weapon using a Pulsed Energy Projection System”. It’s a stun gun, like the one used on Princess Leia, but it’s an area-of-effect weapon instead of a single target one.

(0:40) After using a console, Adam gets a menu for Turrets, Robots (Default, Disable, Enemies) and Doors. The Navigate and Interact options at the bottom of this menu are a bit odd — does navigate mean you can navigate to other screens or consoles? Why bother with an Interact button if you can select everything from the Robots tab?

(0:42) Adam hacks the robot to attack enemies. It attacks enemies… 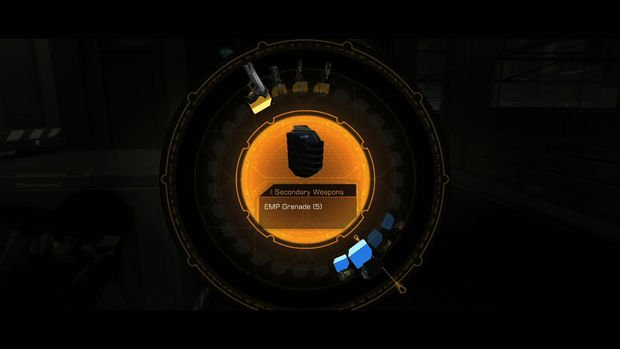 (0:46) Four types of grenades: Gas Grenades, EMP Grenades, and two others. They look like incendiary and explosive grenades?

(0:52) Adam becomes invisible. Apparently that renders laser beam detectors useless. I’m sure they’ll have some “light refracting property” explanation for that. Yeah, I’m not going there.

(1:03) Adam enters the elevator and arrives in the Penthouse. There is a computer there that is owned by Exler.  Soldiers start to arrive.

(1:07) Hacking a computer is different than hacking a console. It looks simple enough, yet more complex than just clicking something in a menu. Every option you have seems to have a Capture Detection percentage attached to it. It looks like you have to navigate to a goal without letting this percentage become too high.

(1:17) Suddenly he’s on the ground, hiding behind a crate next to two soldiers! How does he keep doing that?

(1:19) Throwing a big crate into someone’s face is always a good way to stealthily dispatch of enemies. They’ll never hear you coming…

(1:20) …unless the other soldier is right next to you and starts shooting you. Adam uses the previously unnamed gun, which appears to be a heavy machine gun of sorts. Six shots dispatch the soldier easily. No indication of a health meter in the UI. 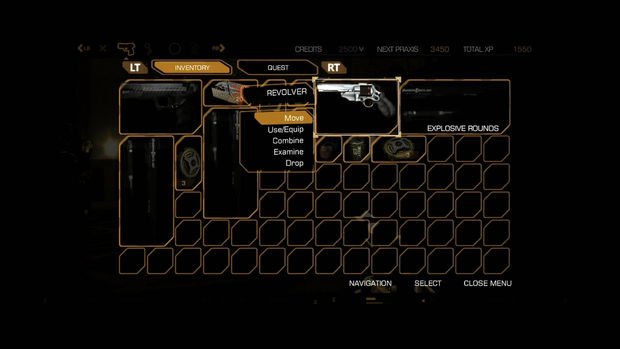 (1:23) Inventory time! Lots of things here — plenty of space, different types of ammunition, and an instant swtich to the Quest menu. This also proves it’s the console version being shown. All the menus are also super console-like, although it doesn’t look horrible. Dugas mentions some bits about the weapons combination elements: “There are four basic ones (Ammo count, Rate of fire, Reload speed, & Damage) that can be combined to most weapons and we have few special ones as well that can be attached to certain weapons.”

(1:25) Adam uses a magnum with explosive rounds on a poor soldier. The soldier doesn’t explode, but he dies in the explosion. Then he blows up a wooden crate next to another soldier. The crate blows up nicely, lots of particles and bits and pieces flying around here.

(1:27) Suddenly Adam is upstairs again, taking cover against a wall. He shoots another soldier from far away, which means the pistol will have a lot of accuracy even at a distance.

(1:30) Adam jumps down with a bubble around him and lands without getting hurt. That settles the earlier question about whether he warped in or jumped in at the start. The landing stuns the soldier in front of him. He then does a little CQC animation and stabs him in the spine with a detractable blade. Ouch. It looks cool and not like something that will get tiring very fast.

(1:38) Adam selects the Laser Rifle and zooms in while using the x-ray vision mode. This rifle looks huge, and it apparently shoots through objects.

(1:44) After going into cloaking mode again, Adam sneaks out of cover. The trailer cuts a bit forwards and Adam does a fancy cinematic move which blows away everything in the area around him. Dugas: “It’s an offensive augmentation called the “Typhoon Explosive System” that allows you to launch mini-explosives in a 360 degree arc around you.”

(1:48) The explosion ends with the title appearing. 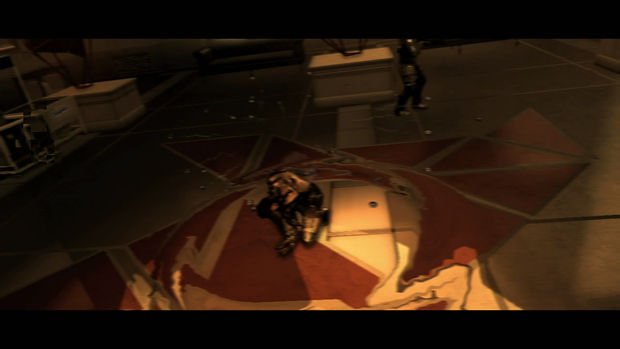 Looks like a good trailer to me. What do you think? It’s definitely different from the first Deus Ex, and the menus and such gives a bit of a Deus Ex: Invisible War feel. But the overal look and feel do make me think it’s going to at least be better than that last one.

Hit the gallery for some HD screenshots detailing everything we talked about. Perhaps you’ll find some things we missed?

[Q&A with Jean-Francois Dugas via Eurogamer]