Friends, loved ones, we come together today not to mourn the passing of Richard, no, instead, we come together to celebrate the joyous life he led. Over the many years I knew him, he was never without a gentle touch, or a sympathetic ear for anyone in need, and he would wish that those of us he had to leave behind should not be mired in sadness.

Richard was such a gentle soul. Friends would be quick to describe him as tender, energetic and the pinnacle of respectability. I recall, four years ago, Richard and I were sitting in my kitchen, having a friendly lunch, and, this being around the time of my divorce, I said to him; “Dick, listen, I love my wife, but I don’t think I’m in love with her anymore. Now that the kids have gone off to college, is it wrong to want to leave?” Richard, being the level-headed guy that he always was, just kinda cocked his head to the side and looked me in the eye. It was amazing how much he could say without actually saying anything.

He also knew he wasn’t perfect, and he would be the first to tell you all this. From his spotty vegetarianism to all those nights he would wake up in the backyard totally naked, Richard had his share of difficulties. Even so, I’ve never seen anyone work as hard to live a good Christian life, and I’m sure he’s enjoying one of his infamous naps in Heaven right now.

Richard, buddy, we’re all going to miss you, and God-willing, we’ll see you again someday.

(Refreshments and muffins will be served in the rectory following today’s service.) 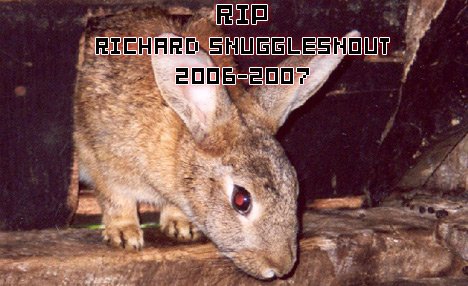 Beautiful, no? Our thoughts are with Richard’s warren.

Now let’s see what DToid’s peeps have been playing this last week!

Robert Summa:
I’ve been flooded with a lot of good games to play lately: Calling all Cars just hit for the PlayStation Network; After a personal tour with EA, I now can really dig my teeth into the Xbox 360 version of Command & Conquer 3; and damn, I still have that little hobbit minstrel to attend to in Lord of the Rings Online. It’s like the holidays or something with all these games demanding attention.

Dick McVengeance:
Now that I’m finally back home, I can play a hell of a lot more games. Phoenix Wright is finally done, and so I’ll be getting through Super Paper Mario in the next day or two. Otherwise, I’ll be trying to blaze through my Gamecube collection of games, putting X-Men Legends II at the top of the docket, then eventually Resident Evil 4.

Nex:
I’ve been splitting my time this week between the new Crackdown DLC and the Forza 2 demo. As far as the DLC goes, Real Time Worlds has set a new high bar for DLC, and I’d sell my gorgeous model girlfriend for a real-life Harpoon gun.

Perhaps I just don’t get the subtleties of the genre, but Forza 2 is like a carbon copy of Gran Turismo, but since it’s supposed to be the Xbox’s answer to GT, I guess that makes it a stunning success.

Oh, and I spent a good twenty minutes deciding if I should play something on the Wii before I realized it’s only a Zelda title away from being as barren as Sony’s PSWasteland.

Colette Bennett:
I’m playing “get wasted in New Orleans with my entire family and all of my friends.”

Gameboi:
I started working through Double Dragon (Oh sweet memories of yesteryear), messing around with Defender, and by the time you post this, I should be knee deep in Command & Conquer 3 for the 360.

Orcist:
Like DMV, I’m finally home for the summer, but only for 3 weeks. I’m going to try to tear through Final Fantasy XII before I pack up and leave again.

Niero:
I have a reading from the Book of Workman: The game I’m currently playing is under such heavy embargo that, should I reveal it, agents would instantly storm my house and take away all of my DUPLO. And I have like tons of the ones with the eyeballs, too. Can’t risk that. When I wasn’t being a secretive cunt, I did get a chance to download and rock an hour of non-stop SIXAXIS rubber duck debauchery on the PS3.  Mechanical sharks ate my children and that was ok! When I saw the demo on screen at GDC I had no idea where they were going with it, but it’s actually not a bad game. It’s like a sedated version of Chu-Chu Rocket. Generally speaking I’m really enjoying all of the neat casual games popping up on hardcore systems. Can’t wait to pick up Ninja Spirit next week on the Virtual Console next week if the rumor holds true.

Rev Anthony:
I’m trying to get my goddamn Dreamcast boot disc to work so I can finally play Bangai-O. I’m also considering murdering the eBay seller who promised FAST DELIVERY HIGHLY RECOMMENDED for my copy of Red Star, considering I still don’t have it. I’m looking at you, rss-cinema.

Faith:
I’m still playing Oblivion for the 360. I love this game. I’ve downloaded and played the trial version of Catan which was fun but not sure if its worth 800 marketplace points.

I’m also playing Trauma Center for the DS and Cooking Mama for the DS at work during downtime.  Both are addicting and perfect to escape the drunken riff raff at the bar.

Nick Chester:
You know what I just found out? At my local library, you can check out video games! Like, good and new games, too. Holy s**t! For example, Trauma Center for the Wii. Okay, so it’s not new, but it’s not Mace Griffin: Bounty Hunter.

I also just picked up Calling All Cars and fully intend on playing that with a few of the other Dtoid staffers, as long as they like me enough to add my PSN name to their console.

Alex Ryan:
Aside from the fact that I’m still playing Castlevania: Portrait of Ruin — which is awesome, by the way — I’ve just received a copy of Yakuza for the PS2 in the mail. I haven’t had a chance to play it just yet, but I hear it was a pretty great game that slipped under the radar. I’ll let you know if that’s true next week.

Also, cocks, I’ve been lambasted by Aaron over the fact that I’ve never played Earthbound, his outrage at this apparent crime against gaming was so great, that I thought he would take my head off. To cool him down I located a back-up copy (wink wink) and have begun playing. So far, not too impressed.

Aaron Linde:
All this new Crackdown content is going to take a little time to digest, but it’s been great so far. Meanwhile, I’ve challenged myself to finish Valkyrie Profile 2: Silmeria before graduation day, which’ll be hard considering I’ve just begun my bi-annual EarthBound trek. Further complicating these efforts is Dragon Quest VIII, bust out for a forthcoming Bargain Bin Laden. And just now I read that Alex ain’t too keen on EarthBound, which means we aren’t talking anymore. Shut up! It’s awesome!

Chad Concelmo:
I don’t know why I find this so cool, but I’m actually sitting in the Los Angeles courthouse right now using the computer in the juror room before I have to deliberate on a trial. Civic duty FTW!

In between calling for “sidebars” with the judge (see? I have learned so much today!) I am, no joke, playing Phoenix Wright: Ace Attorney: Justice for All. Seriously, it was totally in my DS when I took it with me to court. Weird.

Unlike the game, my experience so far today has not included any weirdly hot whip carrying prosecutors or dramatic overuses of the word “Objection!” Am I disappointed? A little.

CTZ:
I finished Ghost in the Shell for the PS2 a few days ago. I gotta say, as big of a fan I am of the whole GitS universe, this game blew. I can get past the generic controls, the dumb A.I., and the small amount of weapons. The story line, however, was the final straw for me. I was thinking it might be something really cool, like Laughing Man story line cool. Nope. The whole plot is that you’re trying to stop a terrorist group and their deadly rice. Yeah, rice.

Started playing Psi-Ops again. After watching a ton of CellFactor videos, I just had to play this game again.

David Houghton:
I’ve been SNESing it up this week with Super Smash T.V. It was a classic of the early games for the machine, but it totally passed me by at the time for some reason, so I thought it was about time to give it a go, if only for a history lesson on my favourite console.

I was only expecting it to be a bit of dated fun to be honest. A half hour blast at most. But sweet lordy Moses, it’s good! It’s a ridiculous amount of fun, and once you get used to the 8-way independent firing (joypad on the knee, arcade button-bashing style is the secret ninja technique, I’ve found), you’re plowing through wave after wave of splattery carnage like Arnie on a sugar rush. It’s fast, visceral, and funny as hell in an OTT way. It’s surprisingly tactical too once you get into it. Thoroughly recommended to anyone else who missed it. Everyone else can continue rolling their eyes at me.

Grim:
I finally picked up Crackdown on Friday and got a few co-op sessions in. I nominate Real Time Worlds for having the best DLC to date (outside of resetting issues it may cause). The harpoon gun single-handedly provided Arrested Developer and I a full night of entertainment.

Other than that it’s mostly been short sessions of Guitar Hero II along with Double Dragon on XBLA until I realized how badly I suck at the game. I think I’m going to be playing only co-op from now on.

Ron Workman:
Just check off about anything and everything on Xbox Live Arcade, C & C Tiberium Wars, Crackdown along with the new enhancements, Burger King Pocketbike Racer (I know), COD2, some Halo game, and GRAW. The Wii has been playing Dust Collector as usual. I finally got a 1080p TV this week and I must say that it has really opened a new door with the 360 for. The dashboard and icons look so much better. HDMI is a great add-on for the Elite. Colette cut my pinky off and wants money to get it back. I am bumping the Elite’s status up just a hair to a stronger buy status. I am really happy that I was lucky enough to get one.

hushgush:
Alternating between Holy shit, this town is awesome and Damn I miss my 360. The first is excellent.

You guys? Play games? Do you? Comments! Now!