My first thought when I heard about Com2uS’ iPhone title Trapped: Undead Infection was an odd one. Is it possible to be afraid of something in my phone? It’s a question I’ve never had the pleasure of asking myself. I suppose I should take solace in the fact that I haven’t experienced a mechanical demonic possession.

With great trepidation, I downloaded the horror title. I’m that dude that bounces in his seat whenever a dog bursts on-screen from left field. I tend to cock my head away from the screen whenever the ghosts come out to play.

The good news is that I never had to confront that problem with Trapped. The bad news is, Com2us probably wanted me to. I was much too preoccupied with other things in the game to even worry about being afraid.

Hey, that isn’t always a bad thing! Hit the break for the review. 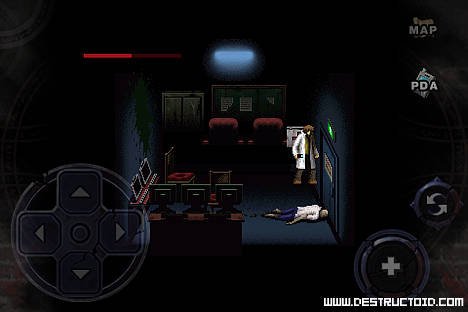 Trapped: Undead Infection is the mobile equivalent of an older Resident Evil title. Instead of a mansion or police station, you are stuck in a sprawling industrial complex full of locked security doors and creatures of the night. The immediate objective seems clear — get the hell out of this place — but the game’s story puts you in the shoes of an amnesiac scientist, bent on finding the antidote for a nasty zombie virus that his research has created. Through your own intuition and many disembodied voices, you’re subtly — too subtly for my tastes — guided through the complex’s many zombie-littered hallways.

The plot is held together tenuously. The disembodied voices dribble information, and the contextual stuff that you pluck from the ground is largely baseless. The segmentation of the game is partially to blame for this. Each new floor or area starts a new chapter with an immediate traveling goal for you to accomplish. Finding a spark plug isn’t conducive to solving a viral conspiracy.

Perhaps more important than finding a mundane object is defending yourself from the undead beasties crawling all over the place. The main enemy in the game is the zombie. He’s slow and particularly vicious at close range. You’ll most often find him in a prone position, posing as a dead scientist, but when you get close, he’ll happily pop up and latch onto your face. The AI involved isn’t dynamic but it works to build suspense. As I play, I’m constantly asking myself if that body is actually a dead person or a creep. 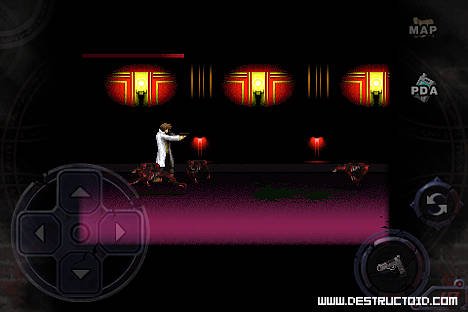 As I said, defense is important. Scattered throughout the game are a large amount of vicious weapons like a rifle, pistol, shotgun or lead pipe. I’m partial to using the lead pipe, because it doesn’t require ammunition and you can whack enemies while they’re playing possum. Ammunition is scarce in the game, so you’ll often find yourself resorting to the melee weapons.

Action can be clunky at times. A bubble on the side of the screen controls all the physical functions in the game. If you’re by a door or terminal while you’re trying to blast a zombie or octopus monster, you’ll end up activating it instead of shooting. In addition to that, the game is locked in an awkward side-scrolling view that causes missed opportunities and wasted bullets. In the larger open areas, it’s hard to ascertain if the enemies are on your plane, in the foreground, or in the background.

Movement in the game is controlled by a digital D-pad on the opposite side of the screen. It’s accurate and doesn’t obstruct the game.  The only time movement is impaired is when a room is too cluttered. There are many chairs in Trapped and they’re all placed in terrible positions.

Aside from killing things, there isn’t much more to Trapped other than picking up objects that will inevitably open a door to another area that has multiple doors that need to be unlocked. There isn’t any horror, but there is a great deal of survival. 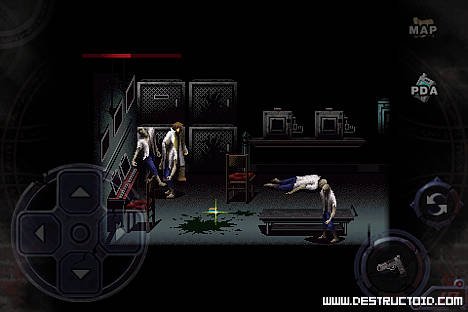 There is also a massive map to navigate, much larger than anything I expected out of a mobile title. Navigation is made easier by your trusty PDA and its mapping function, but it doesn’t reflect areas of interest. A good bit of my time in Trapped has been spent looking for an object that I missed (usually hidden in a corpse) to unlock a door. Objects flicker to help you spot them, but it just isn’t sufficient. You can travel in the game for hours and miss important items that look just like every other piece of clutter in a room.

The game has impressive visuals, but many of the assets are exhaustively regurgitated. Every chair, plant, zombie, and microwave oven in the game’s many rooms looks exactly the same. The kicker is, sometimes, the microwave oven is deemed an important plot element and you’ll skip right over it. The music and sound effects suffice. They don’t inspire nor scare. They exist.

Trapped: Undead Infection does a lot of things right. It’s a massive game with hours of gameplay. In that regard alone, it may be worth your two bucks. The serviceable story, presentation, and action blend together to create a slightly above average, inoffensive product. If you’re a fan of survival games or are really looking for a point-and-click kind of experience on your iPhone, definitely demo this.