It should come as no surprise that puzzle games are prolific on the Community Games channel. After all, complex, ever changing level design and narrative aren’t required, and it’s simple enough to throw together a Tetris-style block puzzler.

That said, it takes skill to make a truly outstanding puzzle game, regardless of its simplicity. A game has to be more than a simple Tetris clone in order to make a name for itself among all the other XNA games.

Does Totem do more, or is it just another puzzle game? Read on for more. 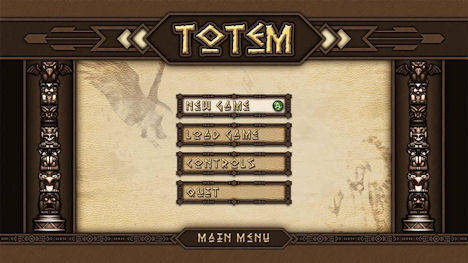 When I first fired Totem up, it seemed needlessly complicated. The controller layout is full of buttons that do things, and the “How to Play” section is difficult to read and understand. However, the game is actually very simple and players will get with the program within a few moments, once they work out how to do things.

Each round begins with a totem pole made up of a variety of different heads. New heads are lined up above each pole and drop down after a small amount of time. If a head lands on an identical head, it will be destroyed, along with the one it landed on and any other matching heads adjacent on other poles.

Totem heads can be moved up and down the pole, swapping places until they reach the desired location. They can also move horizontally if they are on a pole that is higher than another one. The objective of course is to match heads and destroy them. The ultimate aim is to remove the heads and expose the foundation of each pole. Direct hits to the foundation with heads will break it apart, ultimately destroying it. Once all the pole foundations are finished, the stage is won. 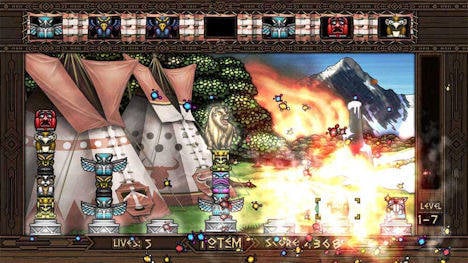 It seems easy, and will be at first, but the difficulty soon ramps up once the number of poles and variety of heads increase. Before long, you’ll be dealing with an entire screen of colored faces and even “boss” heads, leering at you and demanding your attention. You earn a few helpful tools, such an axe that chops away a single head, or lightning bolts and explosions that can cut huge swathes of heads down to size, but surviving to reap those rewards is another task altogether.

There are two modes, Adventure and Survival. They basically work the same way, except one is broken up into stages and gives you five lives while one continues on the same screen until you lose. Despite there only being two modes, the game is addictive enough for replay value to occur naturally.

For a 200 Point game, it has to be said that Totem is another XNA title with impressive production values. The design is very pleasant, with bold outlines and colors to give the game a distinct personality. The music is repetitive, but it’s quite enough to not grate. Some variation in the tunes would probably have completed the picture perfectly. 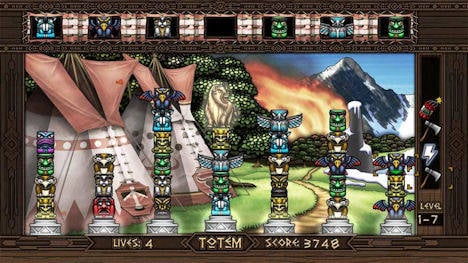 Totem doesn’t exactly offer anything revolutionary, nor is it quite addictive enough to keep you hooked for weeks. There is definitely replay value, and this is a game I can see people coming back every few months or so. 200 Microsoft Points will net you a well produced puzzle game that has a bit of life in it, even if it won’t astound you. If you want a game that can provide a stiff challenge and keep you on your toes, there are far worse things you could do with the Points.

Score: 7.0 Good (7s are solid games that definitely have an audience. Might lack replay value, could be too short or there are some hard-to-ignore faults, but the experience is fun.)