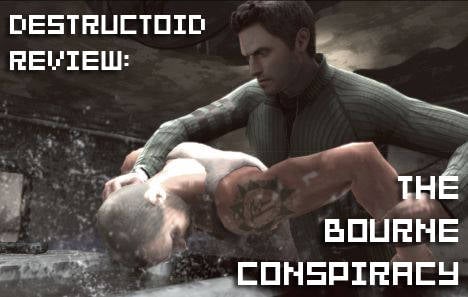 I really, really, really like the Bourne movies. I tell you this because if I didn’t, I’m not sure I would have even tried to review The Bourne Conspiracy, or even play it.

Were it not for the fact that I could re-enact the scene where Jason Bourne stabs a guy in the hand and arm with a ballpoint pen no fewer than three times, I probably wouldn’t be all that interested in The Bourne Conspiracy. But since I am the type of guy who relishes the opportunity to re-enact those moments from one of my favorite trilogies, I thought I’d take the plunge with this sadly Matt Damon-less entry in the Bourne saga.

But was it any good? I suppose you’ll find out, if you hit the jump.

Games like The Bourne Conspiracy make me absolutely hate the numerical score system in game reviews. Its gameplay mechanics are abysmal in almost every conceivable way. Its story is nonsensical at best, sacreligious at worst. Its entire running time is completely disrespectful to the player’s intelligence, assuming that if the character models and locations change, the player won’t realize he’s getting into the exact same gun battles and fistfights he engaged in at the very start of the game. Looking at The Bourne Conspiracy as a list of bullet points, it is an undoubtedly awful game.

But why, then, did I have fun with it?

For better or for worse, Conspiracy attempts to marry the visual sensibilities of the first Bourne film with the limited interactivity of a bad videogame. Every action the player takes is bookended by short, noninteractive cut scenes; if the player wants to jump onto a platform, he runs toward the platform, presses A, watches a heavily-edited cut scene where Bourne jumps onto the platform, maybe has to engage in one or two QTEs, and then finally gets control of the character back. The entire game follows this format, as cut scenes and QTEs take over for any and all player actions that aren’t shooting or hand-to-hand fighting. 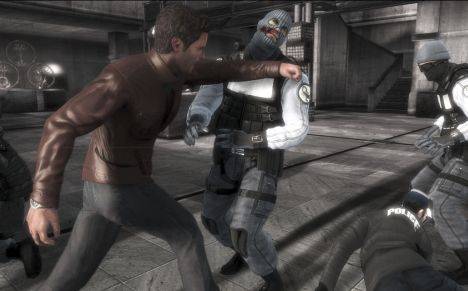 This may sound abysmal, but (for the first third of the game, at least) it kinda works: the transition between player action to cut scene to QTE and back happens so quickly, and so seamlessly, that I initially felt like I was watching a cool action movie and just happened to be helping it along with my occasional input. The actual stuff I was being asked to do was pretty ridiculous (there’s a protracted sniping sequence which, rather than allowing the player to control a sniper rifle as a normal game would, reduces the entire thing into one elongated QTE), but its pacing and seamless integration with the rest of the gameplay never really gave me enough time to realize how absurd my actions (or lack of them) were. The Bourne Conspiracy was feeding me anchovies, but I was chomping it all down so fast that I initially couldn’t distinguish it from King Salmon.

Yes, that was a metaphor. I’m trying to expand.

The player only does two things in Conspiracy outside of the cut scenes: punching and shooting. The fighting system is incredibly simplistic but, thanks to the fantastic character animations and innumerable environmental takedowns, much more visually stimulating and therefore entertaining than it really has any right to be. As with the rest of the game, you’ll only be pressing a few buttons at a time, but the visual rewards make the experience a lot more satisfying than the actual gameplay might suggest. 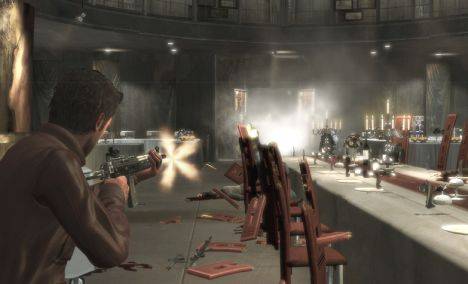 There’s also one driving mission in the game, ripped straight from The Bourne Identity. It’s pretty silly, but appears at just the right point in the game (about halfway) to feel like a welcome change of pace from all the shooting and slapping the player has engaged in for the past two hours.

After the chase, however, everything goes sour. Not because the actual game mechanics get worse, or because the story takes some sort of disappointing turn, but because the repetitive, samey, intrinsically boring game mechanics simply wear out their welcome. For up to two hours, I had no problem with the fact that every single hand-to-hand fight felt exactly the same, regardless of how many enemies surrounded me or how well-armed my opponent seemed to be. For up to two hours, I was willing to slog through the boring, derivative gunfights. For two hours, I thought the integration of QTEs with cut scenes with regular gameplay fun, cool, and charming.

None of it was charming after two hours. I could predict every combat animation before it happened; every enemy’s placement in a gunfight; every QTE event in a bombastic cut scene that generally had nothing to do with the events of the film. Conspiracy‘s ability to gussy up horrendous gameplay with cool visuals and slick pacing completely breaks down around the game’s halfway point, at which time the entire package becomes so frustrating and dull that I was actually happy to find that the entire game was only about four or five hours long, if only to keep the tedium at a minimum. 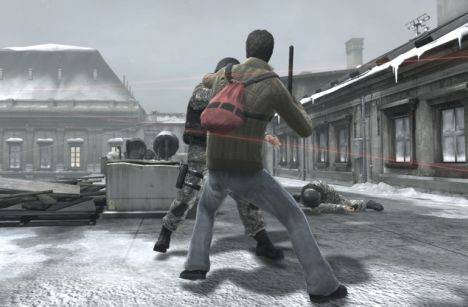 Overall, The Bourne Conspiracy is not really worth a purchase, and probably not a rent, either. If you’re a huge fan of the Bourne movies, you’ll be irritated at the liberties they take with the characters and themes; if you’re not a Bourne fan, you’ve got no real reason to care about the character or what little story there is. The kinetic visuals and fast pacing make the game almost a joy to behold in its first half, but even the veneer of cool editing can’t mask the fact that, sooner or later, the crappy, repetitive nature of the actual game mechanics becomes totally overhwelming. I had fun, but not enough fun to warrant the $60 I spent on the game.

If you’ve got access to Xbox Live or PSN, then just play the demo; it’s got the single best level in the game (the Zurich Embassy), and includes enough of the underwhelming gunfighting and driving levels to likely dissuade most consumers from actually purchasing the game.

Score: 3.0 (Bad – Some aspects are terrible, others are either so-so or kind of fun.)