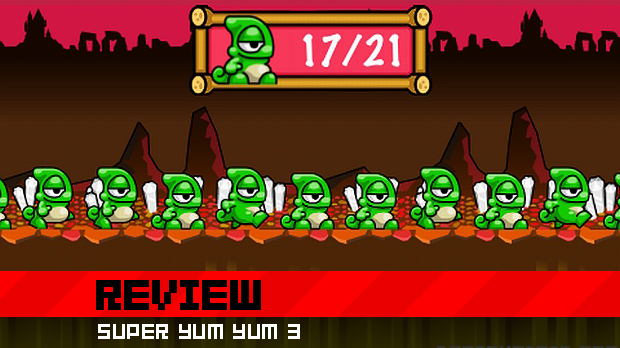 While some gamers pile scorn on the casual gaming market, I’ve long since pulled the stick out of my ass and left that attitude behind as the right type of game in this genre can totally win my heart (cough PopCap cough). I’ve found a few of my favorite casual titles on the iPhone, such as Crystal Defenders and the rather incredible Mew Mew Tower. Let’s face it, we all need a way to waste time every now and then on the go — why not spend it on a really solid iPhone game?

Super Yum Yum 3, the latest in a mobile series from UK company Airplay, follows the adventures of hungry chameleon Leon as he chomps his way across beautiful landscapes in hopes of saving your children and tracking down the elusive Ms. Tum Tum.

Of course, there are also a billion games out there when it comes to casual puzzle selections for the iPhone. Has Super Yum Yum 3 got the chops to stand out from the pack? Hit the jump and I’ll tell you.

I will warn you of this much before I begin: if you dislike vividly colorful games or are turned off by cuteness, this is not the game for you. Of course, if you have eyes, you may have already figured that out — even the title screen of Super Yum Yum 3 is bursting with adorable faces. However, if a cheerful theme doesn’t bother you and you like a good puzzle, you may find Super Yum Yum 3 has a lot to offer within its bright candy shell.

The game begins with the abduction of Leon the Chameleon’s babies by the large and rather overly-makeup caked Ms. Tum Tum, who reminds me a bit of a character from an old Mario game. One thing I noticed right off the bat was that the game seemed as if it assumed you had played the previous titles in the series, offering minimal instruction on how to play at first. However, AirPlay let me know some tweaks were already in the works to make the experience a little more friendly for new fans, so by the time you check this out they will likely already be in place.

You’ll find yourself (and by yourself I mean Leon) standing in a snowy field dotted with cherry blossoms to begin. Each level is navigated easily by touching Leon to move him from place to place. The levels are peppered with gates, which will admit you into each of the game’s thirty-six levels. The objective is simple: to move around each level, you’ll need to walk around and eat pieces of fruit that are scattered about. The trick is that you turn color with each fruit that you eat, and you can only eat fruit that matches your skin color.

At first, this is not a difficult challenge — a few minutes spent looking at the fruit on the board (you use your finger to drag the map around to see it all), and you’ll figure out what order to snuffle them up in. However, it’s not just as simple as eating the fruit — each fruit’s leaves are the color you’ll end up being if you eat it. After eating them all, you will be clear to step on a portal that looks a bit like a spinning peppermint, and the game will show your your score on the level (how many fruits gathered out of the total available and how many babies collected).

As the game progresses through four different worlds, the challenge increases, introducing the babies you must rescue and new large fruits that you can only eat with their help. To progress to a new area, you will find a scale waiting for you which will “weigh” your progress. The scales are rather forgiving — even if you haven’t gotten a perfect score on most of the levels, I found I often had collected enough fruits to be able to move forward anyway. If you’re set on getting a perfect score though, you’ll definitely notice the difficulty rising as you progress to later levels. Good news for the completionists out there!

The picture above shows off a minigame you’ll play after completing a world. Leon will appear with all the rescued babies in tow. Ahead of you, Ms. Tum Tum will throw a giant fruit in hopes of obstructing your path. Considering you have a slew of fruit gobbling helpers, that probably wasn’t her best move, but villains always seem to make bad choices. The red bar in the top left has a marker that moves from side to side, and by tapping the icon at the bottom when the market sits in the yellow, you can kick one of your babies into the fruit. After you kick them all in, you’ll need to eat your way out by using the same technique to chomp. All this is timed, but it’s not hard — you’ll be out and on your way to the next level in no time.

With its crisp, attractive graphics, easy-to-use controls and pleasant music, Super Yum Yum 3 definitely improves on its predecessors in every way. My only complaint about the sound is a tiny one, and it’s that I found Leon’s constant exclamations of “Yum yum!” and “Oooohhh!” every time he ate a fruit to be a little much. Of course, this is coming from a person who is pretty sensitive to sound effects. The voice fits him, but considering how much eating you do in the game, I would have liked to hear it a little less frequently.

Overall, the game is really solid and well worth the $4.99 price tag for the 8-10 hours of play you get (there’s definite replay value as well, especially if you’re aiming for a perfect score). Fans of the first two games will be amazed by how good it looks and sounds, while it offers a lot of new ground for puzzler fans to discover. AirPlay is also hosting a contest for the first 25 people to complete the game with a perfect score, so if you find yourself working on that expert playthrough, let them know!