After playing Hand Circus’ platformer Rolando at some length, I’m beginning to think that every game should feature color-rich palettes. Imagine if Gears of War (always the whipping boy) had LocoRoco backdrops, but retained the same mechanics that makes Gears great. Picture Fenix seeking cover behind a cartoonish plumb tree, revving his chainsaw as a Locust approaches. At the last second Fenix jumps out from cover and puts the rotating metal inside of the monster’s chest.

Blood would splatter all over the brightly colored grass and perhaps even stain the clouds floating in the brilliantly blue sky above. The contrast and interplay between Fenix’s heavy-duty armor, chunks of body parts, and the pastel nature of the art direction would be too sweet.

But that’s just my private dream. After the break, Dale and I will review the iPhone’s very own LocoRoco clone, Rolando. We’ll tell you things about dark armies, physics-based gameplay, and even talk about that aforementioned visual style that I wish could be in every game. 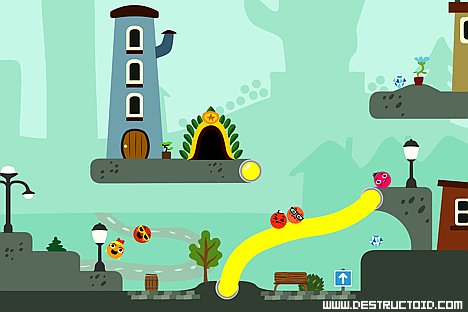 What do you get when you mix nauseatingly adorable visuals, a screen tilting mechanic, and spherical protagonists wrapped around platform-style gameplay? Here is a hint: the answer is not the PlayStation Portable title LocoRoco. The comparisons of Hand Circus’ Rolando to LocoRoco are unavoidable and I have a feeling that Hand Circus is just fine with being in the same league as the highly touted handheld title. Both games give off the same easy vibe, have around the same amount of substance, and feature practically identical art direction. The key difference is that Hand Circus is doing it on the iPhone.

Rolando has a basic story. A dark army has infringed upon the peaceful world of the spherical protagonists, the Rolandos. For a reason that isn’t clearly expressed, the Rolando royalty must be guided to safety. Escorting royalty from the beginning of a level, through a mess of physics-based puzzles and into an exit gate, is the progression of every mission in the sizeable campaign mode. Royalty lack the ability to move like your Rolando and thus must be guided by the Rolandos under your control. 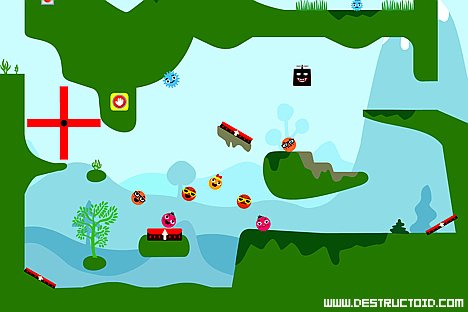 Some royalty have special abilities. The prince rolls automatically, the King sleeps and requires some mighty pushing, and the Queen can float. I love how the game shifts between these three characters. It breaks up the monotony and quells the dissatisfaction that can sometimes occur when escorting the King through a larger, more diverse level.

You can roll your Rolando with the iPhone’s tilt functionality. Slightly tilting it left or right will start your Rolando rolling in the direction of choice. Sweeping your finger upwards on the screen makes the Rolando jump. The basic controls are wonderfully responsive. I especially enjoy that you do not have to completely tilt your iPhone to get the Rolando going. There is a manageable maximum speed that only requires the tiniest effort on your part. The jumping is easy work as well, although rolling and jumping simultaneously takes some practice. 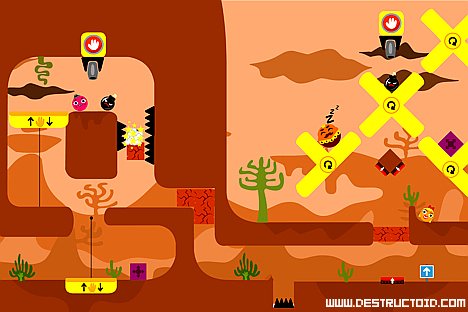 The vast majority of levels have several Rolandos. In RTS fashion, players can drag a nearly transparent grid over a group of the spherical protagonists. Once picked, they control in unison, thus forcing you to choose wisely to avoid accidental deaths by one of the game’s enemies or obstacles. In addition to being able to control several protagonists, you can alter the environment to pave the way through a level. You can hit gears to drop bridges, move windmills, and even drop bombs on the way to the level’s exit.

There is an impressive amount of levels (over 30) in the game, most of which teach you new tricks or introduce new environmental hazards. There are four lands to traverse; each has its own unique visual style. The backgrounds have a color-rich palette typically featuring blue skies, small grassy mounds, and sparse trees. The stars of the game, the spherical Rolandos, are just as brightly colored, and they offer a tasteful contrast to the backgrounds. What little animations or effects there are outside of rolling around look great and rarely cause slowdowns, clipping or other weird anomalies. In addition to striking visuals, Rolando has a great soundtrack that somehow captures the light-hearted feel of the visuals and the vibe of every level.

The biggest problem that I have with the game is the point-and-click control mechanism. It isn’t as precise as the tilt functionality. I have trouble manipulating the various environmental hazards, group selecting, and scrolling. It boils down to figuring out a way to use a large blunt object (your finger) to control a tiny little Rolando. If there is a trick, I have yet to figure it out. The point-and-click stuff becomes the crux of the game. Instead of mindless rolling, you’ll find yourself actively hitting switching and moving gears throughout the level to ensure that you can make it through with the royal payload in tow.

There is not a terrible amount of substance to the game. Almost every level brings in a new mechanic, but after an early point, these mechanics are just refreshes or become too simple to master. As mobile title this is acceptable, but I would like to see more variety. The levels containing the “spikey” Rolando (can stick to the Geometry and rotate around it like an enemy) and the 360-degree tilting are good additions, but not really enough to satisfy me.

Rolando is a great game with a few minor problems that don’t really distract from the total experience. The overall gameplay is solid, even if the point-and-click controls are a bit imprecise. The visuals are beautiful and the length of the campaign is certainly noble for a handheld title. If you have a love for LocoRoco or are just looking for a competent platformer, Rolando is a good buy.

Rolando is the iPhone game that will inevitably become the gaming showpiece for what you can do with the device. As Brad said, it looks great and plays well. It does look like Sony’s LocoRoco, and it plays like you’d probably want the Sony title to, doing a fine job of handing full gameplay control without buttons.

The platformer/puzzler definitely shines in presentation. There is a map of all the levels you’ve progressed through, and it unfolds and opens up like a pop-up story book. The music is fantastic, too. Before this, you’d be hard-pressed to find an iPhone game that sounds like the music was created specifically for it. The humorous dialogue is aimed precisely at your finger; Rolando seem to worship it as an all-powerful deity. They’ll humbly request that your finger give them guidance in their lives, bailing them out of trouble. In all, the game seems to have a shine and polish that a lot of the other iPhone games lack, not to mention tons of personality. 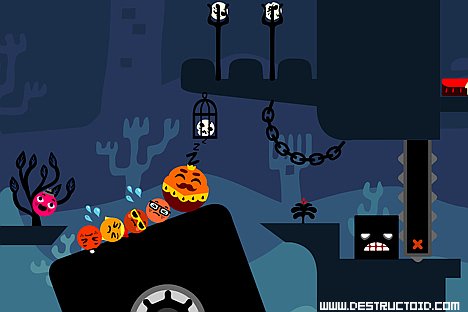 You’ll tilt your way through 30+ levels of obstacles, attracting curious looks from people that wonder why you’ve been spinning your phone around, occasionally poking your finger at it. But you’ll be too engrossed in the game to notice their stares, due to Rolando‘s gradually increasing difficulty. Don’t let the cute little round faces fool you; your brain will be tested and your patience tried. You’ll find yourself doing everything in your power to keep these little balls alive as their surroundings become increasingly unkind.

The controls are highly accurate in Rolando. You’ll flick to jump, lasso a box to select, use two fingers at once to scroll, and use your fingertip to pull back and open obstacles. Unlike Brad, I never had an issue with the touch-screen controls. I did have an occasional issue with the tilt, though. There were a couple of instances where it seemed like the Rolando didn’t want to succumb to the laws of physics. Those instances were definitely frustrating, but luckily they were not the norm. 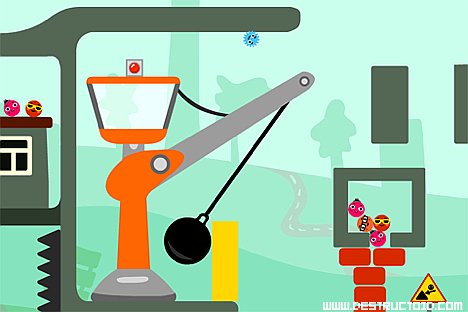 Surprisingly, the tilt/roll mechanic never gets old. The developers have done a great job of gradually introducing new control types and obstacles throughout the game. You’ll have to master these moves while saving the Rolando, all while still trying to beat a time limit and maybe collecting some gems on the way.

Gaming on the iPhone is still young, and the game library shows a serious lack of innovation and imagination. It’s a good thing that Rolando has come along, showing developers and gamers that real games can be made for the iPhone. Rolando sets itself apart from the rest of the “time wasters,” proving to be a genuine portable gaming experience worth your time and money.

Overall Score: 8.5 — Great (8s are impressive efforts with a few noticeable problems holding them back. Won’t astound everyone, but is worth your time and cash.)