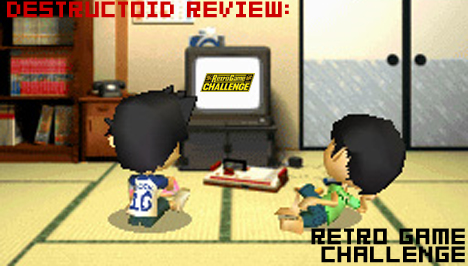 It was something of a surprise to me when I heard that Retro Game Challenge was going to have a release outside of Japan. Game Center CX, the television show on which it is based, is very clearly a product of that country, and its crossover appeal could be very limited.

Yet, here it is on American shores. But is it just another collection of minigames on a system that already suffers from a glut of such content, or something more?

Join Colette and myself as we take a look at Retro Game Challenge.

Retro Game Challenge is a love letter to those of us who grew up playing videogames in the 8-bit era. The premise revolves around Arino, a character based on the host of the popular Japanese videogame show Game Center CX. This version of Arino does not have the same sort of skill at games as his live-action counterpart, and became vengeful and angry towards talented players.

This anger manifested in a digital version of Arino being born. The persona resides in every cartridge of Retro Game Challenge and sends players back to the 1980s to play games with Arino as a child. Once trapped in the past, the player’s only escape is to accomplish the challenges set forth by the digital Arino in some of his favorite games his youth.

The games in Retro Game Challenge are all indicative of games from the time period and are presented in a chronological order that shows them becoming more complex as you travel later into the decade. Completing Arino’s challenges in a game unlocks the next game as well as opening up Freeplay mode. In Freeplay, you may play any title you have finished challenges for without interruption and view statistics relevant to the individual game. 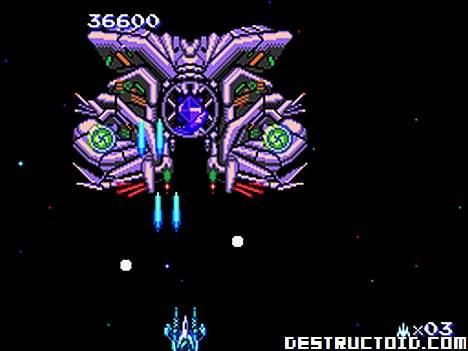 Some of them appear to be outright clones of classic games (particularly “Cosmic Gate,” which plays almost exactly like Galaxian), but they all have interesting gameplay twists that make them feel fresh and new. Many genres are represented across the eight titles. Racing, shmups and even an RPG get tossed into the mix.

Some are much stronger than others, of course. “Robot Ninja Haggle Man,” a series of platforming games with puzzle elements, has some really solid gameplay and intruiging strategy. On the other hand, “Rally King” is a somewhat pedestrian racing title, but it scores major points for two reasons: it winds up being a rather funny statement on product-sponsored videogames, and you don’t really have to play it for very long to complete its challenges.

In fact, that’s something of the modus operandi here. The challenges (and by extension, the forced play time) of each game tend to be rather short. So, if by chance there is a game that you don’t particularly enjoy playing, freedom is almost always right around the corner. 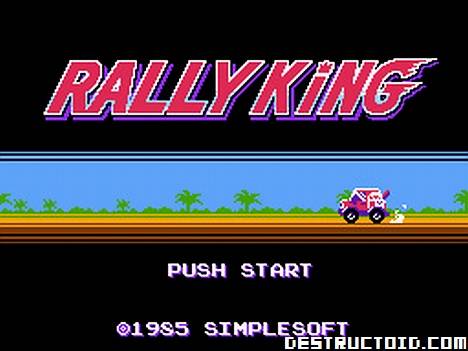 The only exception to this is the RPG in the package, “Guardia Quest.” It is clearly inspired by the gameplay of the Dragon Quest series and does require a fair bit of grinding to complete its later challenges. While I appreciate the need to include the genre within Retro Game Challenge, it feels like a bit of a misstep. It’s the first time while playing that I found the game to be a little bit tedious.

This is no doubt heightened by my general lack of patience with RPGs. And, to be fair, the game is designed to be highly player-friendly. An auto-attack mode where the AI takes actions that actually make sense, keeping the party healed and using attack spells occasionally, is a godsend. But these challenges will take you nearly halfway through the RPG and can require a few hours, throwing the general pace of the experience off.

If it were just a collection of retro-style games, I would not be wasting your time with this review. We have a ton of those on the handheld already. But Retro Game Challenge has a lot of fun examining the culture of games during the period it focuses on as well. Every game has an instruction manual that reads just like the booklets of yesteryear, down to the developer’s message thanking the player for buying the game. And between challenges, the young Arino will occasionally have a new videogame magazine to look at, which comes complete with strategy sections, rumors and cheat codes. 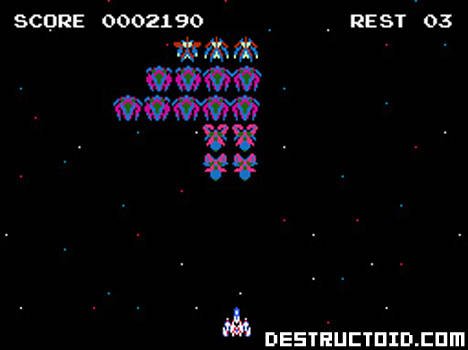 The implementation of these features is one of the ways in which this game really shines. The upper screen of the DS is used for playing your games. When you aren’t playing one, it’s a blank television. The lower screen has the child representations of yourself and Arino sitting in his living room. You can switch between screens at any time to talk to Arino or view a manual or magazine. Then, a quick press of the L and X buttons has you right back into your game.

One of the things that’s so cool about this feature is that you can open to a page of a magazine or manual and keep it open to that page while you play. It’s about as good of a representation of my childhood experiences playing games and using supplementary materials in order to play them better as I think can exist in a time when the Internet has eliminated the need for such a thing.

Arino is quite entertaining in his own right. In between challenges, he’ll chat with you about games he’s interested in or what friends of his from school are talking about. During games, he’s cheering you on. He gets excited when you defeat enemies, chides you for missing power-ups and becomes frustrated when you have repeated difficulty in completing a level. He quickly fills the role of that friend that we played games with as kids, back when we didn’t know what made for a “good” game.

When all is said and done, Retro Game Challenge is a must-buy for fans of, well, retro games. It is like plugging a flux capacitor into your DS. Even if you aren’t a huge fan of the time period, the games themselves are new and interesting enough to warrant a look. I don’t even understand why you’re still reading this, because you should be out at a store buying a copy right now.

Conrad’s already told you everything you need to know about the background and storyline of Retro Game Challenge, so I won’t bother to repeat that information for you, but I can tell you that by buying this game you will be getting one of the most genuinely clever and fun titles on the DS so far this year, especially if you grew up in the eighties surrounded by games as they evolved and changed around you.

From the opening screen, the biggest thing that jumped out at me about Retro Game Challenge was the attention to detail. This truly made the difference between playing a game about retro games and feeling like you were really back in that golden time period. I could hardly believe it, but I found myself actually cursing with frustration and replaying levels over and over with that bullish determination I remember from gaming back when I was a kid. 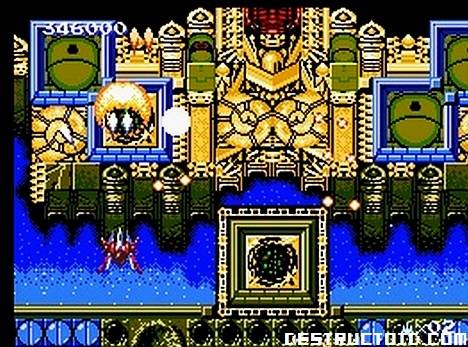 If you have no knowledge of the show that this game was inspired by, I encourage you to check out some of the episodes first so you can enjoy the full experience of the game. Arino’s quirky sense of humor carries over nicely (although it’s definitely been smoothed over a bit for the US version of the game), and while he pushes you to complete the challenges and taunts you a bit, he always seems genuine, which makes the game that much more fun to play.

I had quite a bit of fun playing the games within the game, finding that I wanted to continue to play some of them even after the challenges were completed (I found myself returning to Star Prince more than any of the others). I didn’t have the same feelings about Guardia Quest that Conrad did, however, and this may be because my memories of the pacing of how I played shooters, platformers and RPGs was quite similar to the way RGC presented it: I spent small amounts of time playing shorter games and then lost myself in an RPG for weeks.

The thing that stuck with me the most about Retro Game Challenge (other than the game as a whole) was the presence of the gaming magazines and how young Arino dutifully buys them as each new issue comes out. This is where the game strikes at our memories with the most precise aim, and if it lands the blow, it lands it swiftly and effectively. Every page of GameFan brought back some memory, from the first Nintendo Power I ever opened to the time I spent poring over the pages trying to puzzle out a way to beat the boss and get to the next level. 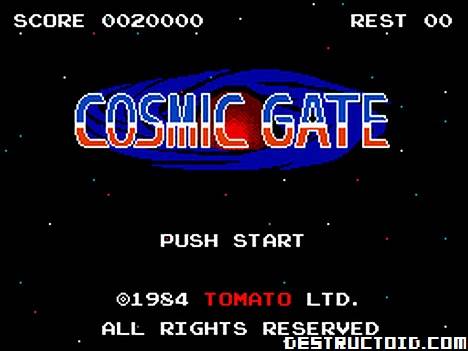 Retro Game Challenge is by far one of the most unique and delightful experiences I have had on my DS, but I realize I am precisely the gamer that this game was created for — I’m 31 years old and I grew up in the eighties while the history of gaming was rapidly transforming by the moment all around me. Retro Game Challenge could have just played on that sense of nostalgia and probably still captured at least my attention, but the game that Namco Bandai crafted around it stands on its own as genuinely fun and gives the player lots of opportunity for replay. It may fly over the heads of younger gamers, but if enjoyed your NES like I did, you’re sure to fall in love with this charming title.

Overall Score: 9 — Superb (9s are a hallmark of excellence. There may be flaws, but they are negligible and won’t cause massive damage to what is a supreme title.)