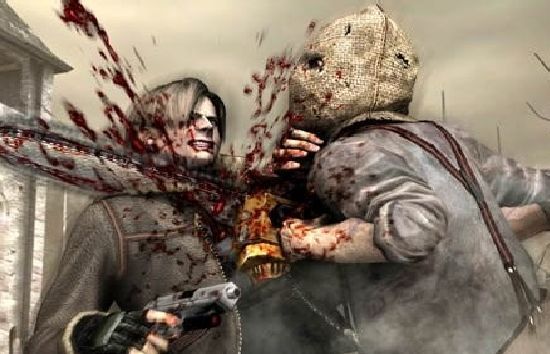 Did you know that Resident Evil 4: Wii Edition came out this week? Evidently, it’s like the Gamecube and PS2 versions that preceded it, except — get this — you can aim with the Wii remote. Sounds nifty, huh?

Well, maybe, maybe not — in order to find out, Aaron Linde and I snagged the game, played the hell out of it, and wrote up a couple of reviews for it. You may disagree, you may agree, but one thing is for sure: we’re right, and if you disagree with us then you are probably wrong.

That being said, hit the jump to see how the Wiimote really works with this “new” version of Resident Evil 4. 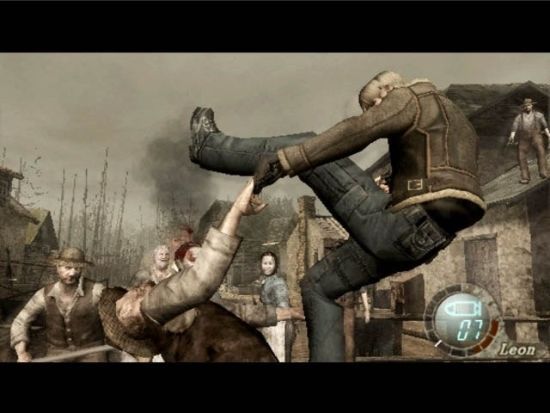 Expect as little as you can. This is the most important sentence one can keep in mind while playing Resident Evil 4: Wii Edition. Remind yourself, “it’s just a port.” Repeat it, like a mantra. Because RE4 Wii manages to take one of the greatest action games of our time and introduces one fantastically effective gameplay mechanic, but it also fails to fix any of the previous versions’ flaws.

Getting the irrelevant stuff out of the way first, the Wii graphics will be entirely unsurprising to anyone who has played a previous version of RE4, or, for that matter, any other game on the Wii. The graphics are easy on the eyes, but they’re also noticeably last-gen. Still, if you actually want to, you know, play the game instead of harping on all of its graphical deficiencies, you’ll find very little reason to complain.

Story-wise, nothing has been changed: the narrative serves only to force the player into entertaining gunfights. is still irritatingly blasé about the fact that he is almost constantly near death, Ashley is still irritating, and that little Napoleon-looking villain is still weird as all hell. Given that the Wii version is meant to be the quintessential version of Resident Evil 4, it also includes Ada Wong’s “Separate Ways” campaign (previously exclusive to the PS2 version of RE4), which is unlocked after beating the main campaign.

Essentially, apart from the controls, everything about Resident Evil 4 remains totally unchanged. But what about the million dollar question: do the Wii controls improve the overall Resident Evil 4 experience? Well, yes, but not nearly as much as they should.

Other than the Wiimote free-aiming and the fact that “press A really fast” has been replaced with “shake the Wiimote really fast” during the reflex minigames, very, very little has been changed. It’d be one thing if the controls in the original versions of RE4 were perfect, but, simply put, they aren’t: still can’t strafe or aim while moving, and these problems stick out like a sore thumb when one considers how useful the Wiimote free-aim is. Since the free-aim is so useful, and sensitive, the movement controls feel even clunkier than before. The player can easily go into aiming mode, pull of eight headshots, reload, and pull off eight more, but the second the player needs to turn or run away, he has to wait for Leon to slowly rotate his body before running forward in a straight line. The aiming and moving mechanics almost feel like they came from two different games.

The lack of strafing or simultaneous movement and aiming are made nearly impossible to ignore by the aiming controls: moving the target reticule does nothing to move the screen left or right (a la Call of Duty 3 and/or Red Steel), which gives the player a greater control over aiming without having to worry about the camera suddenly moving. This makes sense, considering camera movement speeds were more or less the death of other aforementioned Wii FPS’s. What doesn’t make sense, however, is that the ability to look left or right is mapped to the nunchuck control stick: in this sense, the control stick controls the head, and the Wiimote controls the hand. It works, technically, but it also feels odd and unwieldy: the control stick just begs to be used for movement instead of a simple camera turn. Not to mention the fact that one particular weapon (the scoped sniper rifle) doesn’t even use Wiimote aiming at all: instead, all reticule movement, zooming, and firing is handled by the nunchuck and the nunchuck alone. Given the fact that every other weapon is handled with the Wiimote, this is more than a little irritating.

I was originally very frustrated (on a petty, personal level) that the devs didn’t add strafing or aiming movement, until I realized – this is just a port. No more, no less.  For all the lack of new control, for all the awkward turning, it is, in fact, just a port. We should be grateful for whatever additions are present: granted, there is only one real addition to speak of, but it’s an addition that works pretty effing well. Almost too well, in fact.

The free-aim is so useful, so sensitive, and so effectively implemented, that it makes the game much, much easier than it was when aiming was still controlled by a simple joystick press. Headshots are easier than ever to pull off – this single fact makes the game a much more tactile and entertaining experience, but it also makes battles significantly easier. Not to say that the game is now a breeze, but the experienced RE4 player will definitely feel the difference. Even ignoring the ease granted by the pointer controls, it appears the boss enemies are now much easier to defeat: Aaron and I both found that El Gigante and a few other bosses took significantly less damage to kill in this version than any other. You’ll have to play this baby on Hard mode to get a decent challenge out of it.

But even having said all this, Resident Evil 4: Wii Edition is an above-average port of one of the best action games of all time. I’m tempted to say that if you haven’t played Resident Evil 4 before, then the Wii edition should be an easy purchase at 30 bucks, but I honestly don’t believe that there are very many gamers left who haven’t played at least one version of RE4. I’ve taken this into account with my numerical score: RE4 Wii is exciting, action-packed, and the Wiimote pointer implementation mixed with the added PS2 side missions definitely make it the quintessential version of the game, but it nonetheless suffers from the same old control problems that plagued the original title, along with an unfortunate drop in difficulty. Go into Resident Evil 4: Wii Edition expecting nothing more than a fun, minor improvement on an already great game, and you won’t be disappointed. Besides, if you want to see a previous gen console-to-Wii port that does change the entire game from the ground up, you can always pick up The Godfather: Blackhand Edition.

Oh, and on a personal note: why does holding down the B trigger put into aiming mode, leaving the “fire” control to the A button? Wouldn’t it make more physical sense to switch the two functions and map the fire button to, you know, the trigger? It doesn’t exactly detract from the experience, but it’s a niggling little design choice that just irritated the hell out of me. Which hurt the immersion. So, I guess it does detract from the experience. 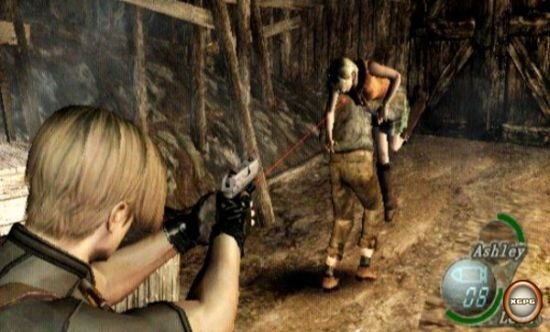 Anthony did well to sum up most of my hang-ups in Resident Evil 4: Wii Edition. It’s difficult to review a game like this one based upon its original merit — RE4 is, beyond any doubt, one of the finest action games ever built, and that’s a fairly common perception among gamers. Reviewing Wii Edition, then, isn’t so much about the game itself, but rather what Capcom did to build upon an already successful title. This, of course, comes down to the controls, and as much as I love what Capcom has added to the game, it only makes what they left out that much more painful to fantasize about.

Again, good ol’ Rev had it pretty much nailed: there was an opportunity here to capitalize on the Wii’s expanded control scheme and implement strafing and run-and-gunning on top of the new aiming system. The absence of such an addition is present at every turn, mostly because the same gnawing imperfections of RE4‘s original control scheme — a wee drawback in an otherwise fantastic title — still remain. To solve these problems would’ve required a top-to-bottom overhaul of the game’s control scheme and a reexamination of the level of difficulty at every step of the way. That’s a lot of work, but hey, I could’ve waited.

To date, nobody’s really figured out a good way to solve the movement versus aiming reticle issue in Wii first-person shooters and action titles — should we hold Capcom responsible for not putting an end to the problem just seven months after the system’s release? Probably not. Capcom has created what can easily be marked as the best version of RE4 to date, but with another year of R&D, it could’ve been a full-fledged remake instead of a port. This, I believe, is the biggest hang-up for both Anthony and I.

So, who ought to buy this game? Two demographics seem prepped and ready for Wii Edition: those who have never experienced the game before, and those who love RE4 so much that any addition merits an entire repurchase — I’m definitely in the latter category. The aiming system is so slick that I couldn’t recommend it enough to anybody who loved the original game as much as I did. Compound that with the bonus content from the PS2 version and you have the most complete version of Resident Evil 4 to date — but what was left out, left undone gives rise to a new longing for the next step: a ground-up remake for the Wii. And yeah, I’d buy it again. 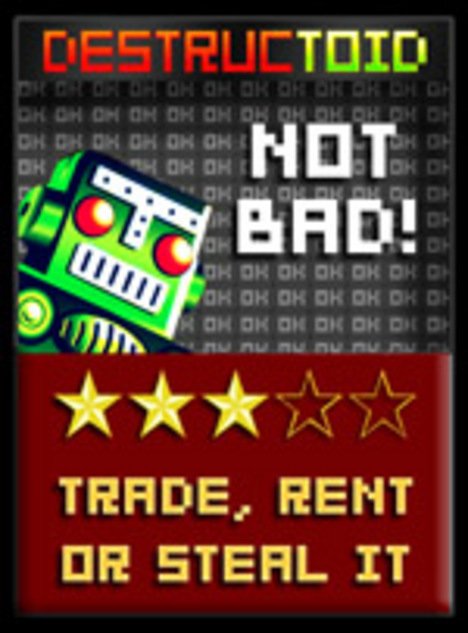