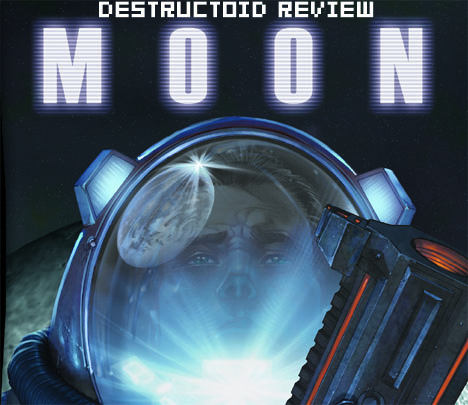 From the moment you rip off that plastic wrap, pop open Nintendo’s too-big case, and push the cartridge into the DS slot, you’ll see that Renegade Kid’s latest title Moon is a technical achievement. The 60 frames per second first-person game play action is a selling point for any just about any game on any console, but it’s remarkable for a shooter on the Nintendo DS.

Renegade Kid proved that they have the talent and fresh ideas with their last work, Dementium: The Ward. Is Moon just as inspired? Or is this just a move from mental scary to space scary? And did they fix that blasted broken save system?

Moon (DS)
Developed by Renegade Kid
Published by Mastiff
Released on January 13, 2009 (US)

As you would guess, Moon is set on the… moon, where a strange hatch was found on the surface. You play as Major Kane, a guy who has the unfortunate job of hopping in the hatch and checking things out. Of course, this is no in-and-out job; things go wrong, and Kane is stuck fighting on his own under the surface of Earth’s moon.

If you’ve played Dementium: The Ward or even Metroid Prime: Hunters for DS, you’ll know what this control scheme is like. The d-pad moves your character while the stylus aims. The left trigger fires. It’s a bit uncomfortable to hold your DS like this for an extended period of time, though. If you’re like me, you’ll eventually find yourself resting your DS against your knee or leg as you play.

As we previously mentioned, Moon looks great. Granted, the moon’s surface and underground corridor-style moon bases aren’t the most colorful or interesting locales to set eyes on, but the developers have done the best they can to keep things interesting. There’s animated happenings throughout your sub-surface travels, and some big bosses later in the game really impress. The static screenshots don’t do this game justice: seeing things glide over the screen at the silky-smooth 60 frames per second is almost unbelievable on this or any portable game system. 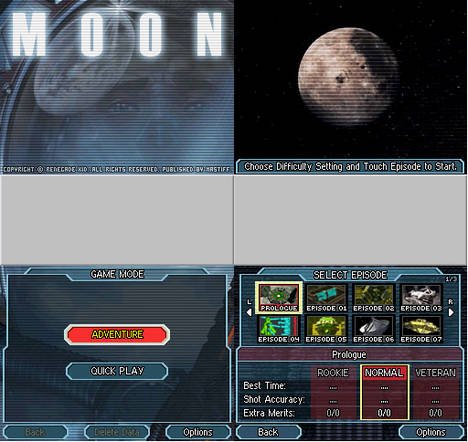 While you’ll spend most of the game on foot exploring this lunar base, there is some vehicle action in Moon. The first you’ll come across is the Remote Access Droid, or RAD. Once you take control of RAD, you’ll be viewing things from floor level, through its camera. It’s equipped to explore smaller tunnels and heavily armed spaces were Kane wouldn’t fit, or be easy prey. RAD has an on-board stun gun; you won’t be able to kill anything, but you can at least hold it off for awhile with this. While controlling RAD, you’ll have to watch the “host meter,” as Kane is still hanging out, open to attacks. In many causes, you’ll use RAD for simple door unlocking puzzles, but smarter players will also use the stun attack in conjunction with Kane’s guns to take out enemies.

The other vehicle is called the LOLA, a moon surface vehicle that you’ll drive in a couple of missions. Armed with a turret, you’ll move from one moon hatch to the next with this. The control feels slightly off, but it’s forgivable as you’re on the gravity-challenged moon surface. The vehicle glides like the wheels were made of butter, which would normally be kind of fun if you weren’t dodging land mines or later trying to beat a time limit.

Moon‘s game play is a blend of exploration and first-person combat. This exploration doesn’t amount to much, though. You’ll explore rooms to find ways to unlock doors to more rooms. You’ll fight enemies along the way, working toward a boss. You’ll blast a multitude of floating robo-orbs out of the air, enough so that you’ll grow tired of seeing them. Occasionally you’ll come across some kind of panel or item that advances the story, and then you’ll push on to the next room, and the next boss. Unfortunately, this is a rinse, lather, repeat situation, all the way until the end, with little variety offered in terms of game play.

Boss fights to break up the room romping. While not necessarily imaginative, they’re all pretty fun to take on, save for one particularly challenging one. Finishing off bosses and levels usually leads to new weapons. Again, these weapons aren’t as imaginative as you’d like, but they get the job done. You’ll start out with a pea shooter with unlimited ammo, but you’ll move into things like a cannon, a super-powered pistol and even a sniper rifle. Sure, you’ll be knocking out the same enemies over and over, but at least you’ll have different weapons to kill them with. 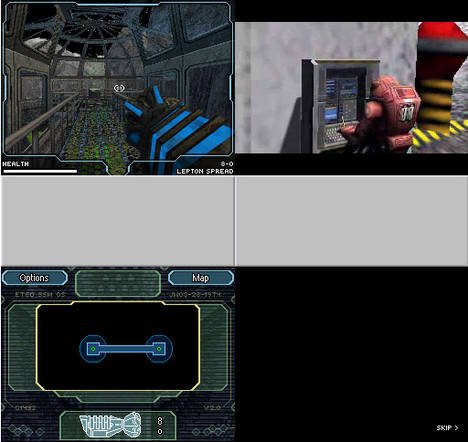 There is one boss battle that suffers from poor design. At the end of a stage where you’ve already grown tired of, you’ll have to fight… you guessed it, another floating robo-orb. This one is super powered, and he sometimes retreats to a locked area mid-battle. You’ll have to rush to send out your RAD to unlock the area he hides in. Oh, and did I mention that the boss heals himself in there? While the other bosses were simple FPS style fun, this one was unnecessarily difficult and overpowered. It took me thirteen tries to beat this boss on normal. It wasn’t a deal-breaker for me, but I could totally see how another might cast the game aside after that many failed battles.

Compared to Dementium: The Ward, the save system is better. But it’s still not great. There are enemy-free save rooms you can re-visit to save your progress. That’s appreciated. What is not appreciated is the frequent and ill-placed auto-save spots. The worst instance comes along in a timed race in the LOLA vehicle. Mid-way through the race, regardless of how well you’re doing, the game auto-saves. The problem here is that you cannot go back to a pre-race period, and there’s only one save space. I had 17 seconds to reach a goal point that was unreachable at that time, and after too many unsuccessful attempts, six levels in I was forced to delete my save file and restart the game.

Finally, the music is annoying at best, and sometimes unbearable. One song that you’ll hear in boss battles sounds to me like a symphony of broken electric razors clanging together. Another mood song is a weird series of beeps that sounds like it’s being sped up and slowed down in a child’s toy electronic keyboard. Unfortunately this song breaks the mood instead of setting it. In other songs it sounds like the composer was looking to use grating noises to raise tensions, but all it manages to do is raise questions at how this passed as suitable music.

Despite some moments that made me want to fling my DS to… well, the moon, Renegade Kid’s latest is a fine game. It seems to lack a bit of polish and charm, the game does become a bit repetitive, and there’s some flaws in the game design in some areas, but the experience was still fun overall. Moon won’t win any awards for its story, either. But the spot-on control, slick interface, and impossibly smooth FPS play on this little portable game system should be commended. The end of the game seems to hint at another visit to the Moon. We’ll definitely be looking forward to that.