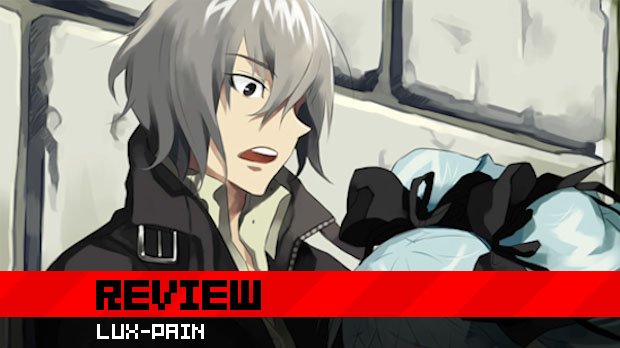 That is the predominant sentiment that one takes away from a session with Lux-Pain. What the hell is this? What the hell is supposed to be happening? What the hell am I doing with my life? All these questions are valid when “playing” this “game.” Perhaps one of the most bizarre choices for localization I’ve seen in a long time, the very existence of Lux-Pain in the West seems incredibly confusing.

It can barely be called a game, its concepts are convoluted and vague, and the localization efforts are alienating. In that case, what the hell am I doing still playing this thing? All this and more, we shall attempt to explain, as Destructoid reviews Lux-Pain.

Lux-Pain‘s premise is the kind of mad idea you’d expect from a very Japanese adventure. People — who in this world randomly leave traces of emotion called Shinen — are being infected by an invisible worm called Silent that controls their actions and makes them perform horrible crimes. Special agent and 17-year-old (because in Japan, 17-year-olds can join top secret organizations) Atsuki has “Lux-Pain,” a special power that allows him to see Shinen and do battle with Silent. It’s down to him and the rest of the team from FORT to uncover the source of Silent in Kisaragi City.

How much of that plot is actually apparent in the game is questionable, because in order to battle evil spirit worms, one must enroll in a Japanese high school and eat cakes with underage girls who talk about nothing of value — ever. Most of the game is spent having meaningless conversations with characters who exist only to exist, with actual story progression taking a back seat to what is basically a Weeaboo’s wet dream. It doesn’t help that most of the dialog is awful. Imagine having a conversation with one of the Animal Crossing residents that lasted for several hours. That’s the level of inanity we’re dealing with.

When something important does happen, the game assumes you already know everything about the game world and its terminology, and you might do … if you read the 60+ page manual provided with the game. Thorough reading of the manual is required just to understand what on Earth the game is trying to be about, and even if you familiarize yourself with “worms” and “terms” and “residual Shinen,” it’s likely you’ll still end up scratching your head.

There are a few moments when the game attempts to be a game instead of a barely interactive novel, but to call it gameplay is to have a very broad definition of the word. Sometimes Atsuki needs to hunt for Worms and Shinen, and you will activate the “Sigma” phase. While in Sigma, you use the DS stylus to “scratch away reality” in a puerile egg hunt for worms which are hiding underneath. It’s kind of like scratch cards, except you won’t win anything … actually that’s exactly like scratch cards.

The other bit of interactivity involves a psychic battle with Silent infections themselves. This is kind of like a rhythm game, but with no rhythm and very little game. A number of blue circles slowly turn to white and you have to tap them with the stylus when they do in order to damage the Silent. This is something you won’t know to do unless, again, you read the manual. You’re just thrown into your first battle and told to deal with it.

You gain EXP for each Shinen found and Silent fought, and can level up. Leveling up extends your time limit when looking for Shinen, but seems to exist solely to trick you into thinking the game might be an RPG.

That’s about as game-like as the “game” gets. The game’s box promises examination of crime scenes and gathering clues, tricking potential players into thinking this will be like Phoenix Wright. However, this has nothing of the charm and fun of those games, and the game is so linear and on-rails that “clues” are never hunted for. You do no real investigation. Your job is merely to watch the ridiculous story play itself out, occassionally engaging in half-hearted busywork to move things along.

The worst part about Lux-Pain is that it could have potentially been really good. The game starts out with a very Silent Hill-esque atmosphere, as Atsuki searches through an apartment building and uncovers some Shinen that have genuinely disturbing messages. Had this have been more of an adventure game and less of a novel full of vapid characters and even more vapid situations, Lux-Pain could have been a legitimately dark and creepy DS game. As it stands, Lux-Pain is barely a game at all.

That doesn’t even go into the rather embarrassing and confusing localization. Aside from various text typos, the dialog text and the voice acting sometimes completely contradict each other. I have no idea what happened, but an example of this problem comes when the game’s text claims the character is talking about Akiba, but the voice actor is actually saying New York. That’s just a tame example of how different the game’s text and the spoken dialog can be. There are also scenes that are only half voice-acted, as a certain character has a one-sided conversation with another character who is only represented through text. This has turned an already senseless game into something spectacularly bemusing.

In scenes where there is no voice acting, we are given no clues as to who is really talking. The on-screen character art barely moves, even when two characters are having an exchange of words, and it’s far too easy to lose track of who said what. Luckily, the dialog is nearly always useless, and it simply doesn’t matter. In fact, about 90% of the game just doesn’t matter. Also, the descriptive text switches between present and past tense, seemingly for no good reason.

Ultimately, Lux-Pain provides a mediocre experience when it could have been a much darker Phoenix Wright. Had it taken up more adventure game elements and stopped being a “Choose Your Own Adventure” book without any of the choice, I might have been genuinely impressed. It’s certainly not unplayable, but most of it is just very dull and I think only the hardcore Japanophiles out there will dig it. Ultimately, there was just no reason or logic to this game being sent Stateside. Such a shame, considering the rather enthralling premise.