The moment I read that WayForward had announced a puzzle game with horror elements, I was instantly intrigued. There’s nothing I love more than a game that tries to take a different approach, and with its moody atmospherics and puzzles wrapped in mystery, it seemed as if LIT would be right up my alley.

However, as many of you already know, I am no fan of the Wii control scheme as I tend to feel most developers try to build their games to use the motion control of the Wiimote whether the game calls for it or not. LIT does use this control scheme, so I went into it wondering if it would detract from the overall experience, or (gasp!) possibly lend to the immersion, making the gameplay even better.

Hit the jump to see if any of these chills end up thrilling.

I’m a girl who plays a lot of survival horror games with relish, so when a game claims it’s going to scare me, I have to admit I approach it with a certain degree of skepticism. It’s not that I don’t believe that it can scare me … only that I’ve seen a lot of the tricks before, and I don’t start quite as violently as I used to when something comes crashing through a window.

LIT foregoes the traditional shock tactics and offers its scares by way of a consistently haunting atmosphere, an approach I personally always prefer to the former. It opens by placing you in the role of Jake, a teen who has been separated from his girlfriend, Rachel. Their normally familiar high school has fallen into shadows, and unidentifiable spirits seem to have taken up residence there. 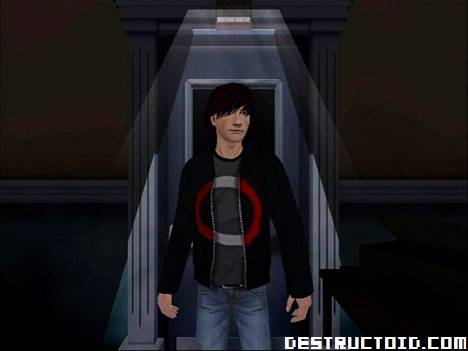 True to its puzzle roots, the game leads you through each of its 30 levels very simply: you find yourself in a pitch-black classroom, armed with only a flashlight and a slingshot to start. Your goal is to make it to the other side of the room through the exit door, but in order to do so you must find a way to form a path of light to reach your destination. Step one foot into the darkness, and you’ll be claimed by the spirits scampering within.

The first five levels are fairly simple, serving as a tutorial for how to use your surroundings to your advantage. Jake uses his flashlight to find items such as ammo for his slingshot (which you can use to break windows, allowing light in),TV remotes, cherry bombs and more. You’ll need to learn to use these tools to your best advantage quickly, because the game’s difficulty ramps up considerably by the time you get to the double digit levels. 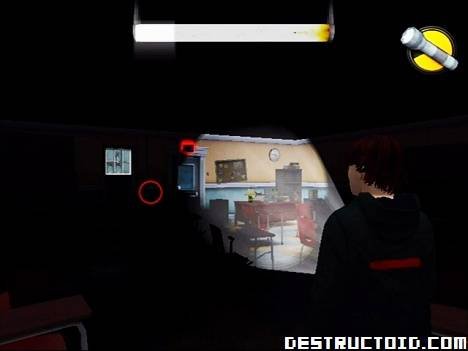 Your control of the camera and how motion controls work are of great note here. Everything feels organic and natural, from character movement with the nunchuk to use of the slingshot. Normally the way controls are assigned (especially with the Wiimote and nunchuck together) tends to pull me out of the atmosphere of Wii games, as I often tend to find their implementation feels forced, but they are used beautifully here and I genuinely enjoyed controlling Jake through the story. One great example, for instance, is that Jake’s flashlight runs out of battery power with continued use. To bring it back to life, you shake the Wiimote as you would with a real flashlight, restoring it to full power.

There is one point worth mentioning that I did not care for, and that’s the ease with which you can kill Jake without meaning to. For instance, the paths you cut through each classroom using light are usually just narrow enough to walk through, and if you aren’t very careful about making sure he walks in a perfectly straight line, he can accidentally dip a toe too far into the darkness and get sucked under. This is irritating in that you have to repeat everything you’ve already done in your efforts to “solve” the room, but with a little extra effort you can keep it under control. 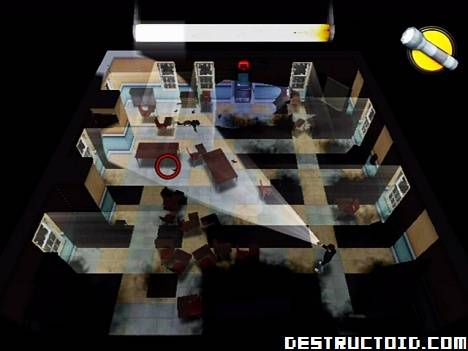 Another cool detail I failed to mention earlier is the addition of contact from Rachel via phones ringing in some of the classrooms as you progress through the game. These phone calls are completely optional, and you could possibly miss them if you don’t move quickly, for she will only try to ring you for so long before she gives up. If you do catch her, the calls make for a nice supplement to the scary atmosphere, and I felt that much more accomplished every time I actually made it to the phone before it stopped ringing.

Not only does LIT offer a solid challenge for those of you who enjoy brain twisting puzzle solving, but it offers some really cool unlockables after completion. You will open up the option to play as Rachel (which allows you to receive phone calls from Jake) and a timed challenge difficulty in Dark Mode, not to mention unlocking more levels in the school maps. You definitely have solid replayability here, which adds more awesome to an already excellent package. 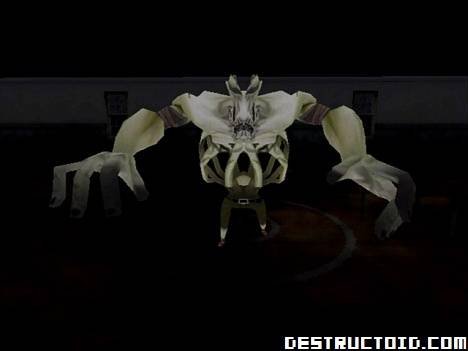 LIT stands proudly eclectic among the sea of mediocre titles available on WiiWare, bringing a truly innovative take on the puzzle genre to the table and offering a lot for players to explore. The issues with minor control flaws can’t really bring down the well-executed atmosphere, clever design or overall fun the experience of playing the game offers.

Consider also that LIT costs $8 to purchase but dishes up more quality than some titles four times its price, and you have a must-download title on your hands. Do yourself a favor and grab it, especially if you have a soft spot for some good old fashioned scares.