In our Totem review, we discussed how prolific puzzle games are on the Xbox 360’s Community Games channel, but if there’s one thing even more popular among budding indie developers, it’s the shoot ’em up. It’s easy to throw an endless swarm of enemies at a path of bullets, but just like with puzzlers, only the outstanding will have a chance.

Ladybird Galaxy shares many things in common with a shoot ’em up, except for one issue — there isn’t really much shooting at all. Despite the same perspective, layout and look, something far more passive is at play, something akin to Pac-Man in a Geometry Wars universe. That sounds strange.

Read on for the official review of Ladybird Galaxy. 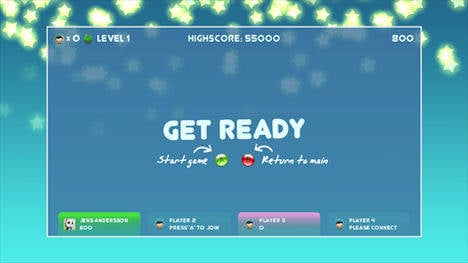 It would probably be more fitting to label Ladybird Galaxy a collect ’em up. The aim of the game is to steer your little rocket around the screen, picking up gems and converting them into points. The ship continues moving perpetually, allowing you only the opportunity to steer it, and you will have to avoid a slowly increasing number of evil ladybirds that wish to do you harm.

As well as gems, a number of stars also appear on screen. These stars will temporarily speed up your rather slow rocket upon contact, and also add a bonus multiplier to any gems collected during that timeframe. In addition, fast moving shooting stars periodically whiz across the screens, and if you’re lucky enough to grab it, you will be able to kill any ladybirds you touch, as well as shoot at them for a limited period of time.

The only other thing to watch out for is a line that moves across the screen at regular intervals, which will kill you upon contact. The only way to avoid this is to travel to the opposite end of the screen and passing through on the other side (a’la Pac-Man). The game can be played in single-player mode, or with simple multiplayer.

That’s pretty much it. Ladybird Galaxy is not a complex game, nor is it especially deep. Unfortunately, the game’s simplicity is not to its favor, mostly thanks to a few niggling issues that stop Ladybird from being the kind of laid back fun that its aesthetic would have you believe it is. 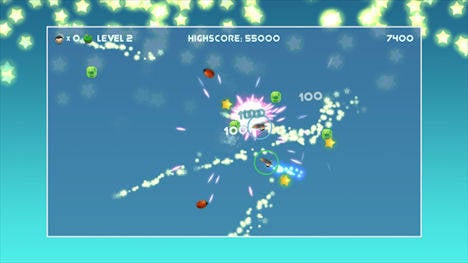 First of all, steering the rocket is abysmal, with a large turning arc that makes it nearly impossible to guide when sped up. While I can see this being implemented to add challenge, it only really adds frustration. On the subject of frustration, the killer line that glides along the screen is a real pain in the arse. You do get a warning of its approach, but not knowing from what side it will appear is aggravating when you have a rocket that can’t turn around properly.

Despite the annoyances, Ladybird Galaxy is by no means a bad game, it’s just one that hasn’t done enough to make up for its lack of depth. Simplicity should be accompanied by elegance, and this is something that Ladybird does not possess.

The game is certainly fun enough while it lasts, and the presentation is very charming, with a homemade feel that doesn’t automatically scream “amateur.” The look and the sound is very charming indeed, and it’s always fun to torture ladybirds, evil or not.

Sadly however, the term “fun while it lasts” is a very important one, because it likely won’t last the average player very long. It lacks that addictive, “one more go” quality of our previous highlighted games have possessed. As likeable as Ladybird Galaxy can be, it probably won’t hold your interest for more than a day. 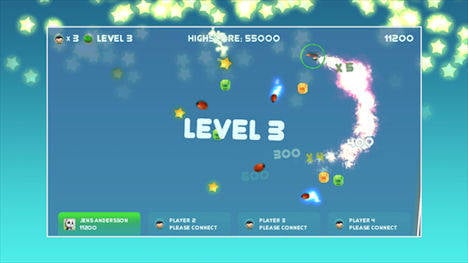 Perhaps with some more gameplay variety, a bit more action, and less frustrating control, Ladybird Galaxy could have more replay value and be easier to recommend. As it stands, Galaxy is simply an okay game that hopefully will be improved upon and done far better in the future.