The developer of Hail to the Chimp, Wideload Games, started out its young career with the endearing Stubbs the Zombie in “Rebel Without a Pulse.” Stubbs was a hit-or-miss game for most. Its mixture of dark humor, satire, and zombie ethics was refreshing, but ultimately hobbled by its limited options and repetitiveness.

Hail to the Chimp is an entirely different game from Wideload. Instead of a salesman zombie that maims humans, players are constricted to ten cutesy animals in their epic journey to become king of beasts. Hail is a limited collection of mini-games, meshed with a spaghetti-string story. Obviously, the developer wanted to liven up the genre with the usage of satire and over-the-top level design. The real question is, does Hail to the Chimp succeed or even embellish upon an already bloated party-game genre? 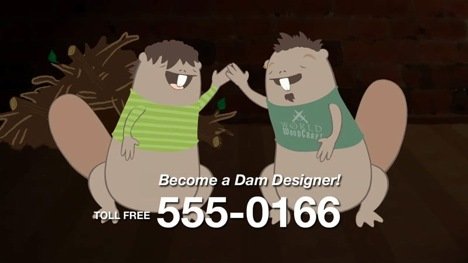 So, an embattled lion king has lost his throne and it’s up to a cast of daring animal protagonists to claim it. Instead of just having the most loyal or amicable animal have the throne this time around, the animal society loosely decides to have a democratic election process. The game revolves around a host of “Primaries,” which is to say mini-games, in order to garner the most votes and win the nomination. Each Primary is a simple battle for “Clams.” The equally anthropomorphic Clams are the all-purpose currency of the game. The objective of each game is to grab Clams as quickly as possible and do something with them. It could be as simple as hoarding them or dropping them into an apparatus, or as complicated as handing them out as donations or exchanging them for more enticing objects like money, election signs or handfuls of mud to sling at opponents.

One of the real problems with Hail is the fact that collecting Clams gets intensely mundane after several minutes of play. Every mini-game is structured in much the same way, so repetitiveness is an understatement. Hail is the embodiment of unoriginality past the first few mini-games.

The campaign mode consists of a tiered three-to-seven match system, with the loose tie-in of competition for the throne. Every campaign match is filled with three A.I. who are fairly adept and have the habit of creating a challenge every now-and-then. Each part of the tiny campaign offering takes place in a themed-level with the player assuming an assigned character specific to that level. The end objective of each set of matches is to take first-place overall and win the nomination. I don’t even know how to iterate how boring this endeavor becomes past the first go around. 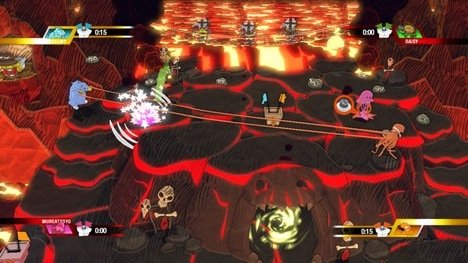 All of the levels are fairly innovative for a party-game. There are usually several traps or environmental effects relegated to the theme of the level. The boat level has cages and water, while the lava-mountain-thing has both lava and exploding rocks. Items randomly appear at points throughout each level. Each item has a specific capability, many of which involve transforming the player’s head or oppoents’ heads into random shit like beehives, balloons or bombs. Items are fairly devastating to opponents, and can quickly turn the tide of the Clam-collecting adventure.

Outside of using items, there are few options available to players other than running around aimlessly. There is a punch button, as well as a jump command. Both feel about as mushy as the strum bar on a Rock Band guitar. Players will often find themselves mashing the action buttons, swearing to the gods that they hit the other animal first or jumped to evade some environmental effect. It is quite distracting when controls are as gummy as they are, and it really does no service to the limited experience that Hail to the Chimp already is. Unfortunately, punching is fairly vital to the game, as it can be the only way to gain Clams in between drops in the levels.

An interesting concept brought into the game is the idea of double team maneuvers. By hitting a button, players are invited to work together to topple the leaders of the match. These attacks are devastating and fairly easy to pull off. One move, called “clothesline,” has two players stretching themselves across a level to trip other players, while another consists of a spring attack that launches both players in the air to land on the poor victim. This is certainly a welcome concept, but the limited nature of the levels and play mechanics again dictate the experience. 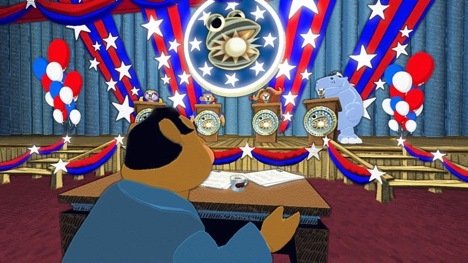 Upon booting up the game, there is a real obvious strain on Wideload’s part to create an infrastructure that consists of political satire. The game opens with a fake news outlet and a reporter named Woodchuck Chumley reporting on sensationalist storylines of the election process. Also, there are several different satirical commentaries on the political system visualized outside of the fake news. There are interviews, election commercials, and even public service announcements. This is all integrated into the menu and streams fairly well. There are a couple of hiccups between lines from the woodchuck, but it’s negligible for the most part. The satire is definitely a redeeming value, and even the most jaded gamer will find himself giggling at some of the more outlandish scenes. In a way, the vibe of Hail to the Chimp really brings back memories of Live launch title, Whacked.

There is an online mode, as well as a local mode. Good luck finding anyone to compete against online, nonetheless three people. The group of gamers that have already purchased this game seem fairly inactive. I searched for a match for many hours and came up empty-handed quite often. Luckily, the local multiplayer should always work if you have friends handy. Unfortunately, the game experience doesn’t change that drastically. Instead of decent A.I., all of your friends will experience the gummy controls and overall repetitiveness of the game. Sure, laughs can be had over drinks, but Hail is definitely not the game with which to entertain guests. 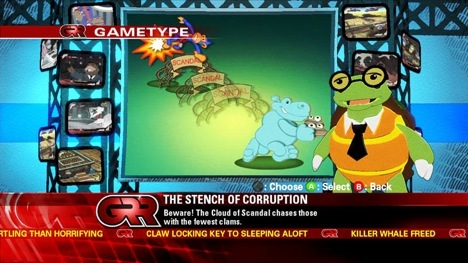 Visually, the game looks greats for the most part. The only exception is the occasional visual loss of your avatar. The camera is pulled out to the necessary degree, but the differentiation of, say, the hippo and seal is not the best from a 3/4 perspective. That said, the particle and environmental effects are fairly spot-on and not distracting.

Hail to the Chimp is a collection of decent ideas, all poorly executed to some degree. The satire, while welcome to the genre, has been managed in a much better capacity by other games. The mini-games are all weak, mundane, and especially repetitive. Hail to the Chimp serves as the example why Mario Party has a board game structure and differentiated mini-games. Hail is just a particularly weak title, in a genre that is regrettably full of weak titles.

Score: 4.0 – (Definitely do not buy. If you have little ones, it may be worth a try to entertain them with this game. Although, I am not quite sure if the play mechanics and menu system will translate to them spectacularly well.)