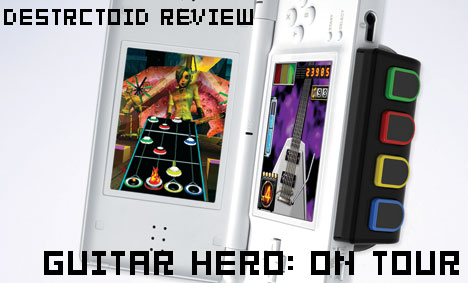 On a long list of things we never thought we’d do, being able to play Guitar Hero on a subway — or more importantly, on the toilet — was certainly one of those things. Developer MachineWorks gave it a go with Guitar Hero III Mobile, which was a noble but ultimately poor attempt to cram the experience into the mobile gaming space. Disappointing as it was, most gamers assumed that the invention of wireless guitar peripherals was as liberated as they were going to get.

Enter developer Vicarious Visions, best known for their long line of technically impressive handheld works, and most recently the Guitar Hero III: Legends of Rock and Guitar Hero: Aerosmith ports for the Wii. No stranger to the Nintendo DS or the popular music franchise, Vicarious Visions were tasked with bringing the impossible to life as Guitar Hero: On Tour. The result is some impressive engineering: a four-fret Guitar Grip peripheral that simulates the neck of the larger, less-mobile guitar control.

At the end of the day, though, is it really worth $49.99 just to be able to play Guitar Hero in an airport toilet stall? And more importantly, do you really want to?

The gameplay in Guitar Hero: On Tour will be familiar to anyone who’s poked their head out from under a rock these past few years. But for those uninitiated, here’s the short version: a vertical fret “highway” scrolls down the screen, indicating “notes” that must be pressed on the peripheral along with the (arguably) rock music coming out of the speakers. By moving the “strum bar” and pressing the appropriate buttons, you’re approximating the general experience of actually playing a guitar. The result is a slight feeling of musical accomplishment, and musicians (or wannabes) telling you to “just pick up a real guitar.”

The “Guitar Grip” peripheral that ships with the game slides into the Nintendo DS Game Boy Advance cart slot only has four fret buttons (as opposed to the console’s five), and you rub the touch screen with a guitar pick-shaped stylus instead of using a “strum bar.” To eke more points out of longer notes, rubbing the stylus anywhere on touch pad acts as the whammy bar. “Star Power,” the bonus mode that can help multiply your score, is activated by making noise into the Nintendo DS microphone (or if you’re in public or Snake Eyes from G.I. Joe, by pressing any of the handheld’s buttons).

At its core, Guitar Hero: On Tour really does hit most of the same notes that its bigger console brothers do, and after a few songs (for either Guitar Hero veterans or newbies), you should be strumming along to your favorite (or not-so-favorite) hits in no time.

On Tour features a number of modes, including the expected career mode which lets you name your “band,” and select one of the game’s characters as your avatar, as you make your way through five tiers/venues, for a total of 25 songs (and one bonus tune). The single-player experience also offers a practice mode as well as a “Guitar Duel” game, where you’ll go head-to-head with a computer controlled guitarist in the game’s arcade-style “battle mode” (which we’ll get to in a moment).

The multiplayer experience of Guitar Hero isn’t ignored here, either; On Tour is full of both competitive and cooperative modes, which requires two copies of the title as well as two “Guitar Grip” peripherals. Some carry-overs from the console version include the score battles Face-Off and Pro Face-Off, as well as the cooperative modes where one player will play guitar and the other might play the song’s bass line or rhythm. For better (you’re not forced to play them in the game’s single player mode) or for worse (they exist), the “battle” mode introduced in Guitar Hero III also makes its way to On Tour in the form of “Guitar Duels.”

This modes has two players battling it out against one another playing the same song, but the key difference is the “Battle Gems” that appear on the note chart. If these notes are successfully played, a defensive or offensive power-up is earned that can be activated the same way “Star Power” is in other modes. Attacks like the “Photo Op” can make it hard for your opponent to see their notes, or the “Difficulty Up” power-up which gives your opponent a temporary, more difficult note chart to play. Vicarious Visions makes some interesting use of the DS-specific capabilities here, with powers up like the “Pyrotechnic Mishap” which causes a fire that must be “blown out” using the DS microphone.

It should be known that the music selection in Guitar Hero: On Tour is paltry compared to other games in the series, with a measly 26 tracks available, one of which is an unlockable bonus song. Whether or not you find the song selection to be of your liking is a matter of taste;  there’s certainly a more “mainstream flavor” found in the title than some might like. That’s not say the songs that are available aren’t solid choices, really.

The music is varied, from Maroon Five’s “This Love” to Ozzy Osourne’s recent single, “I Don’t Want To Stop” and Rick Springfield’s “Jessie’s Girl” to Stevie Ray Vaughn’s “Pride and Joy.” Some choice are questionable, but nearly all of them are recognizable and have fun, playable guitar parts. A handful of the tracks are masters, with a few being respectable cover versions; interestingly, the further you make it through the game’s set list, the more cover versions you’re bound to hear. The sound quality of the songs is decent for the handheld, but sound pretty bad coming out of the tiny DS speakers;  headphones greatly enhance the experience, and are highly recommended.

In terms of the games note charts, they’re mostly fun to play, and make sense with the guitar parts you’ll hear.  Even with only four fret buttons, the most seasoned Guitar Hero veteran will find a challenge on the game’s “Hard” mode; it’ll definitely take a few songs to get used to the “Guitar Grip,” and figure out the timing of stylus. “Expert” difficultly is blisteringly annoying with the peripheral, and will likely cramp hands and break hearts after only one or two tracks; the jump between it and easier modes is immediately obvious, even on the easiest songs.

Thin set list aside, there’s certainly a lot going on in Guitar Hero: On Tour that do add value to the experience. In terms of modes and features, it’s most definitely as packed as you’d expect from other games in the series. The key is how it plays, and that’s really all down to how the “Guitar Grip” peripheral works. Let me start by repeating that the concept of a peripheral that slides on to the Nintendo DS is genius; there were far worse directions Vicarious Visions could have gone with this, including ignoring a peripheral altogether or making a mini ukulele-like controller. For the most part it works, but there are too many physical and mechanical problems to ignore.

To start, the “Guitar Grip” slides in to the GBA slot easily; on one hand, this is a plus, since it makes initial setup a snap. The downside is that it also slides out easily, which can happen even when first trying to adjust the strap on your hand and sometimes when you’re playing. This wouldn’t be a huge deal, since it’s easily enough to pull the “Guitar Grip” snug with your fingers; the problem is that every time the peripheral slides out, the game alerts you and requires a complete reboot of the Nintendo DS to continue play. As stated earlier, this rarely happens during songs, but can happen a lot while sliding the grip on and, even more annoyingly, when trying  to remove the peripheral from your hand between songs for breaks.

Breaks are definitely important when playing On Tour, because you’re going to need to take them often. Because the fret buttons are relatively small, those with larger digits (most adults) are going to run into finger cramping issues trying to keep their fingers steady. Even worse is how you must hold the DS, which is a book style manner; this requires you to crane your arm like it was in a sling just so you can get a more authentic “strumming” experience. Although in-game warning screens caution against it, it’s also natural to want to bend your wrist. Try as hard as you like, you’re going to find yourself in some uncomfortable positions that will lead to tender wrists and cramped fingers, and in the only “happy ending “ is completing a song.

Visually, the game is nothing to sneeze at — Vicarious Visions knows how to pull a lot of the handheld — but it’s also nothing to write home about. The artistic style has an ever-so-slightly more cartoon style than the console games, but it certainly fits in with the direction Activision has been taking the series. The in-game animations are what you’d expect for a Nintendo DS title; that is to say, they’re pretty bad, but are more impressive on a portable than the animatronic junk delivered in Guitar Hero III.

In the end, whether or not Guitar Hero: On Tour is worth your cash is a tough call. How Vicarious Visions brought the franchise to life on the DS is pretty amazing and works incredibly well, if only in small bursts. The multiplayer functionality is a nice touch as well, but requires a friend (or enemy) to have purchased the costly handheld title as well; the lack of Wi-Fi play is definitely noticeable in this case. The tiny set list (which you can blow through in well under three hours) and the cramp-inducing peripheral are the deciding factors here: Guitar Hero: On Tour is an interesting experiment for the Nintendo DS that might appeal to die-hard fans, but the franchise is ultimately better left in the living room.

To take a page from the book of elitist musicians everywhere: “Put down that toy and go play a real plastic guitar.”

Score: 6.0 – (Decent. Slightly above average, maybe a little niche. But you wouldn’t recommend it to everybody)

Full set list, for those who care about that kind of thing in a music game:

Venue: Subway
Do What You Want — OK Go
All the Small Things — blink-182
Spiderwebs — No Doubt
Are you Gonna Be My Girl — Jet
We’re Not Gonna Take It — Twisted Sister

Venue: Subway
Do What You Want — OK Go
All the Small Things — blink-182
Spiderwebs — No Doubt
Are you Gonna Be My Girl —  Jet
We’re Not Gonna Take It —  Twisted Sister

Bonus
I Am Not Your Gameboy – Freezepop