Yesterday wasn’t any fun for my girlfriend. She had a terrible day at work and was unable to snap out of a somber mood. I told her to check out thatgamecompany’s Flower and see if the downloadable title would make her feel any better. I explained to her that when I played the game, I felt more relaxed and less at odds with the world than I have in a long time.

She bit and tried the game. After an hour I could see that the game didn’t have the same effect. Her shoulders never relaxed, she never got comfortable on the couch and she quit playing after three levels. She told me she enjoyed the game, but it didn’t help relieve any tension.

I found this curious. How could our experiences be so different? What did I see in Flower that she couldn’t? I wondered if it was her lack of experience with games or perhaps that she didn’t want to allow the game to emerge her into its beautiful world. Surely, I wasn’t crazy.

Perhaps the point of Flower is that we can all have different experiences. I had the great pleasure of working with Anthony on this review and, as you’ll notice (after the break), he had a wonderfully different view on the game as well. 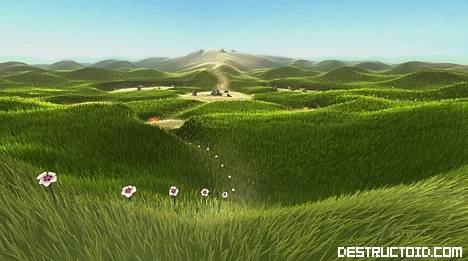 Flower does more than amuse. It tickles the senses and stimulates an emotional response. It took me away from my vexing week and plopped me into a world rife with color and sublime subtlety. I found myself unable to conjure up that previous bile-building fervor that was beginning to boil over before I sat down to play. My fuming was replaced by a child-like sense of excitement and an intense desire to take part in the game’s unspoken narrative. You can call thatgamecompany’s PSN title experimental or reasoned — I’ll debate that later — but it seems prudent that I begin by saying Flower is divine.

At face value, the most remarkable thing about the title is its presentation. The first few stages have an angelic quality. Bright green grass gently spreads with the wind’s force as gentle metallic streamers highlight its direction. The background ephemera and a looming sky give levels a sense of scale that pushes you to explore the lush environment. Then everything changes and Flower gives you a more aggressive, strange world with a score that fits the mood and tone perfectly.

The presentation’s elegance matches Flower’s gameplay. You play as the wind and use SIXAXIS motion controls to navigate the environment to collect flower petals. Once enough petals have been gathered, a new area opens and you repeat the task until a swirling endpoint appears. The game’s simplicity isn’t deceptive and there aren’t many instances of depth — at least, I never found myself challenged or perplexed. However, the things Flower asks you to do are honed. Flowers are arranged in sensible patterns designed to take you on an atmospheric journey. Levels are themed and constructed in a way beneficial to the shake-up of gameplay elements. Some levels allow you to drift and pick up petals at a leisurely pace. Others force you on high-speed rails, make you imitate particular light patterns or soar above previous boundaries. 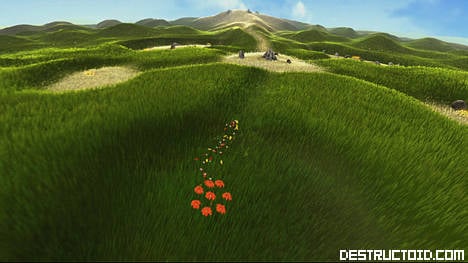 Unlike most games that dabble with motion on the PS3, Flower provides a scheme that isn’t spotty and always works the way you desire. As you harness the wind and make flowers blossom to set loose a petal, you won’t encounter any problems. This is due in large part to the way you hold the controller. Instead of a standard position, you’re required to hold it horizontally.

One could argue that a game built around motion control with a focus on relaxation is experimental. I don’t buy that. I think Flower is a chiseled game that taps its toes in the experimental puddle. I’ll make the point and define some of its characteristics in a roundabout fashion:

Flower has goals and boundaries. Flower doesn’t let you transcend its framework. Petals that need to be gathered are denoted with noticeable (yet tasteful) spheres that catch the inquisitive eye. Even though it’s possible to navigate an environment for an infinite span of time, you won’t be able to venture far. The game monitors you by taking the reigns of the wind if you venture too far or try to get off the beaten path in the game’s quicker, more rail-like levels. The yoke is tight, but that doesn’t stop you from collecting unremarkable petals. Collecting these “bonus” petals reveals more of the immediate scenery within some of the more solemn environments. It’s more than just an immediate visual cue — it also affects the outlook of the game. 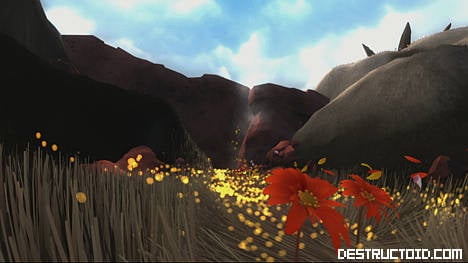 Flower tells a story. It has a silent narrative that you have a hand in shaping. I won’t pretend to know what the designers wanted me to see and feel; however, I believe there is an obvious overarching theme of change persistent throughout the game. There’s room for interpretation, obviously, but Flower isn’t much different than Doom: You’re a petal-gathering Marine, defending yourself and possibly Mars from hellspawn and darkness.

Experimental games are generally built upon the foundation of a simple mechanic or idea. Flower is simple, yet the mixture and introduction of new gameplay elements keeps you entertained. The experimental stuff — the ability to roam around, interpretative narrative or its relaxing design — add to and elevate the base elements.

My only qualm with Flower is negligible. The game is short, perhaps only a few hours long. If you didn’t try to collect extra petals or roam around the environments, you could easily beat the game in around an hour. The good thing about Flower is that there’s an indefinable grace that makes you want to keep playing. I played through it twice after I found it to be calming. I can easily see others playing it to get all the extra petals or because they want to experience the beautiful conclusion all over again.

Flower is a wonderful title that isn’t hard to recommend. The gorgeous visuals, superb motion controls, and refined gameplay elements come together to create a satisfying game. There’s more underneath the surface of thatgamecompany’s polished title. If you want to be soothed, it can. If you want an awesome visual experience, it can be that. If you want to be surprised, you probably will be. Do yourself a favor and check this out.

Because of Flower‘s last level, I now know what a visual orgasm feels like. Flower is a gorgeous, mellow experience that, regardless of what many might say, is undoubtedly a game.

Which is sort of the problem.

When Flower‘s main priority is showing you really beautiful images and interesting mechanics, like in the very last level or the (completely optional) grass-painting section early on, it’s truly a wonder to behold. In these moments, Flower felt like nothing I’d ever experienced before — a work of art where the focus is on calm exploration or visual rewards, unrestrained by conventional “go here, do this” game design.

Unfortunately, that’s exactly what the other 80% of the game entails. 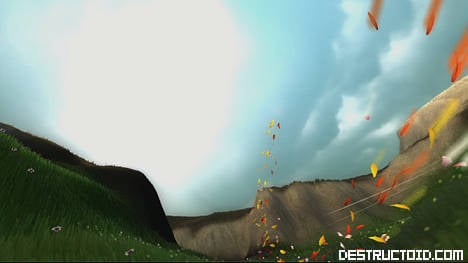 While the controls are fluid and the environments are jaw-droppingly beautiful when they want to be, there’s just not much chance to enjoy them when much of the game boils down to a tedious, unnecessary set of “collect all these flower petals to open the next area” objectives. This sort of gameplay is somewhat easy to tolerate for the first two levels, but — even for a game whose running time only lasts two hours, maximum — it gets incredibly tired near the middle. I didn’t find it relaxing, or fun, or terribly interesting to fly around an environment trying to pick up every last required flower petal in order to progress. Additionally, once you’ve cleared a particular area, you’re treated to a short cut-scene of that area exploding with life and color; this is tolerable early on thanks to how beautiful the nature-gasms look, but once you get into levels where you’ll be clearing up to a dozen different areas in sequence, it just gets rather irritating and repetitive to have camera control yanked away every time the game wants to show you that, yes, you just successfully infused color back into this part of the landscape.

Flower feels a little unsure of itself; since the game was so unconventional in terms of control and narrative and cosmetics, it’s as if the designers were worried about alienating the player through even more unconventional objectives and game mechanics. As it stands, the game has two or three truly brilliant, imaginative, awe-inspiring moments that happen to be unfortunately bookended by tedious, uninteresting, collect-a-thon gameplay. Those wondrous moments alone make Flower a must-buy for any PS3 owner with an extra ten bucks to spend, but one can’t help but lament the fact that it doesn’t provide the consistently surprising, jaw-dropping experience it well could.

Flower feels like the first step in a right direction — much more so than any of thatgamecompany’s previous releases — but having played through it twice, I can’t help but feel that it could have been a gargantuan leap.

Overall Score: 8 — Great (8s are impressive efforts with a few noticeable problems holding them back. Won’t astound everyone, but is worth your time and cash.)