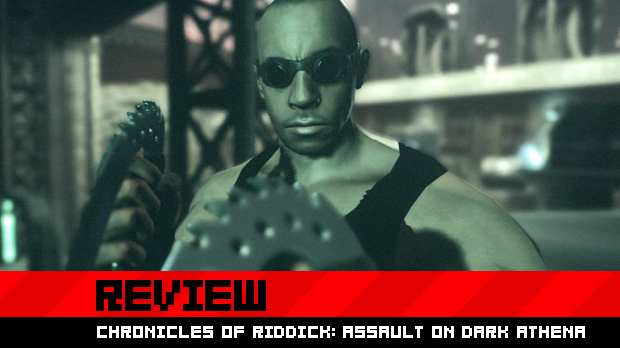 You’re probably wondering why we haven’t reviewed The Chronicles of Riddick: Assault on Dark Athena until now. Well, wonder no more. Blame our lack of coverage on germs, man.

Late last Thursday, I got wicked sick — a case of bronchitis — and I’ve been trying to clack away at this review since. I played a good portion of the game with a one hundred and two-degree temperature and let me tell you, it’s a trip. The pink and purple explosions on-screen brought about by Riddick’s shine eyes are really disorienting when you think your body is dying.

Anyway, that’s enough of my whining. Hit the break for the full review.

Richard B. Riddick lurks in the shadows of a dark, decadent expanse of star systems where outlawry, wickedness and the bestial nature of man rules. It’s a universe of unapproachable evil that only the corrupt and perverted can thrive in. Riddick’s vision of this setting isn’t distorted. He’s no more a hero than the renegade slaver, but that’s why I love him. He’s a monster like everyone else, motivated by the baser desires of revenge, greed, and freedom of distraction.

And he’s finally back after a long videogame hiatus. Starbreeze Studios’ The Chronicles of Riddick: Assault on Dark Athena is an “episodic” continuation of the 2004 surprise hit, The Chronicles of Riddick: Escape from Butcher Bay. Unfortunately, Assault on Dark Athena doesn’t do much more than extend the 2004 Riddick fiction that it’s bundled with. The integral mechanics of the previous title — the first-person stealth and shooting — have been carried over with minor tweaks.

If you’re unfamiliar with Riddick, let me acquaint you. Riddick is a grim guy who favors the dark more than the light. Even before he gets his shine eyes — an ability that you can access at any time to see in a dark room — from a slam preacher in Butcher Bay, you’ll find yourself sneaking around and sticking to Butcher Bay’s poorly lit corners, carefully monitoring enemy movements, calculating the best possible time to jump in for a sick melee-based kill. It’s the charm of the title, and its bread and butter as well.

Of course, you could always rip into a passage with guns (assault rifles, shotguns, and pistols) blazing or knives brandished. There’s really no wrong choice with choosing either stealth or outright aggression. Both games rarely punish you for being noisy, other than the occasional extra guards.

While Athena’s melee system isn’t radically different from Butcher Bay, there have been a few tweaks. Riddick now has more melee moves. Pressing different directions with the left knob while swinging will generate different attacks. There’s not a traditional combo system, but you’ll find yourself opening up opponents with a lot more ease. And yes, it’s all brutal stuff with real-time deformation. The viciously curved knives, Ulaks, cut swaths across your opponents’ chests, while fists deform faces and give bloody impressions on skin.

What you get from both these action elements is a sweet mixture that provides strategic action choices — shooting or sneaking. The AI isn’t dumb, nor is it a slouch with a rifle. The enemies aren’t wholly unperceptive of your sneaking approaches, either — move too quickly, and you’ll have frantic shots and loads of soldiers beginning to descend on your position. It’s pulse-pounding stuff, brilliant in execution and deeply satisfying.

Time hasn’t been kind to some of Butcher Bay’s components. (The visuals, however, have been upgraded.) The trial-and-error gameplay — constantly reloading when you have taken excess damage or were noticed before you were ready to fight — can become a chore, and the ancient autosave system has a tendency to screw you over in profound ways. I had to start my game over at one point in the mines thanks to respawning soldiers, low health, and a mech that was turned towards me as soon as I reentered the arena.

You won’t have saving problems with Dark Athena, but the trial-and-error stuff is still present. One section at the beginning of the campaign in particular displays the need for continual reloading. It’s a room packed full of cybernetic zombies (or Drones) and you’ll have to test the waters several times, monitoring how they react and work together as you pass through each portion. Trial-and-error is frustrating, especially when you find yourself repeating sections for the sake of health. It’s common to roll through an hour of gameplay in Dark Athena — especially towards the end — without any healing stations.

What I loved the most about Dark Athena was its aggressively grim tone. From the very beginning of the content, it’s very clear that Riddick is toying with real monsters. The “Dark Athena” is a renegade ship that travels in dead space, pillaging mining colonies and kidnapping workers for manufacturing purposes. The renegades are creating half-human, half-machine Drones that can be remotely controlled for guarding purposes. It’s a hellish union between machine and flesh.

Even the unconverted prisoners that aid Riddick are twisted. One merc talks incessantly about raping the woman next to his cell. One prisoner rubs one out before your eyes. It’s dark, man.

The first five or so hours of Dark Athena’s content is a testament to great design. The different sections of the ships generally add and build on new gameplay elements, which include better platforming. I had a great deal of fun sneaking behind Drones, disabling them, and dragging them off to the shadow before the next one became aware of what was happening. Even the portions where you have to shoot — when you’re either taking control of a drone remotely or handling an assault rifle yourself — are a blast.

However, the stealth and combat fun screeches to a halt after this time period. At some point you’re greeted with a world without many shadows. It’s an aggravating section of the game full of backtracking, awkward enemy encounters and unintuitive puzzle-based stuff.

The game picks up again with about fifteen minutes left in the campaign, returning you to familiar territory and mechanics. It’s a thrilling series of encounters; each one should leave you with a big smile.

Assault on Dark Athena does have a multiplayer component, but it’s largely unpopulated and underwhelming. Before I claw into it, let me preface this first: I searched for matches — both ranked and public — for extensive periods of time. Over a three-day period, I never found a match with more than six people (and that was a fluke; commonly, rooms have 2-4 people). Riddick’s multiplayer is largely dead.

There’s a bunch of traditional multiplayer modes available — team deathmatch and various objective-based twists on that formula — but the key to remember about the multiplayer is that it uses the same gun mechanics from the single player.

As a whole, it’s unsatisfactory.

Assault on Dark Athena is no more than a competent shooter — it’s the mix of stealth and out-and-out confrontation that gives the title its edge. In multiplayer, it all breaks down. Headshots are common, respawn times are jokingly short, and level design is bad. The matches have an up-tempo, almost CounterStrike feel — there’s even a mode that uses a weapon system like CS — yet they lack that title’s refinement.

The savior mode, I thought, would be Pitch Black. It’s a mode that pits one melee-armed Riddick against several player mercenaries. After picking up a big weapon as a mercenary, you’ll be granted a flashlight to see Riddick in his shadows. If a player manages to kill Riddick, then he instantly becomes Riddick and the match is reset. It sounds great in theory, but the execution is clunky. You can’t grab as Riddick, the move you relied on in single-player; you can only swipe helplessly with your curved blades. It’s much too easy to burn Riddick when he’s fumbling around in a melee animation.

If you disliked Butcher Bay, then nothing about The Chronicles of Riddick: Assault on Dark Athena will win you over. However, if you enjoyed the original title and are thirsty for more of the same action with several tweaks, feel free to get this game. Just try to forget the last few hours of Athena and don’t mess around with the multiplayer too much.