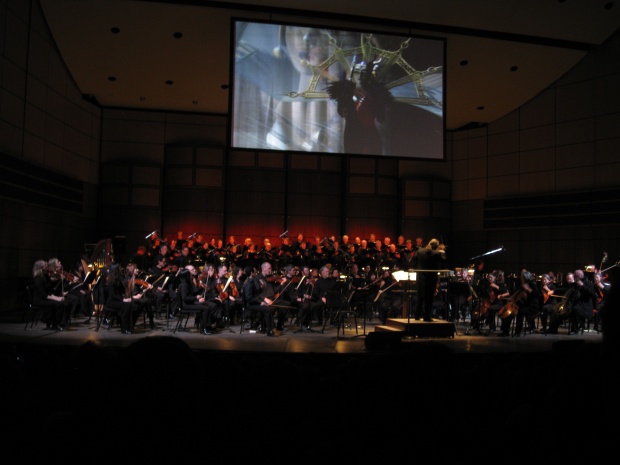 A quick story before I tell you about our adventures to Distant Worlds, if you’ll allow me the indulgence: in 2004, years before I ever even dreamed I might one day write about videogames for a living, I read about a concert that was taking place in Los Angeles right before E3. This concert was called Dear Friends, and it was an orchestral performance of the memorable music from the Final Fantasy games. Held on my birthday, there was no way for me to attend as it sold out almost instantly and I had no means of jetting across the country. Since that time, one of my “must do before I die” goals was to see a Final Fantasy concert in person.

Five years later, the dream became a reality when I traveled with Niero and Dale to see Distant Worlds, the most recent Final Fantasy themed concert. With Grammy award winner Arnie Roth conducting and famed composer Nobuo Uematsu in attendance, we knew we were in for no less than a spellbinding performance. We arrived at the concert hall and immediately found ourselves surrounded by all manner of fans, and hurried to our seats as not to miss a moment.

Hit the jump for impressions and pictures from both Dale North and I.

Well, you already know how happy I was to be there, but since pictures speak louder than words, I’ll give you an example for reference.

Yeah. Kind of happy. After standing in line to score a t-shirt (see gallery) and the Distant Worlds CD, we felt more or less ready to take our seats and wait for the show to begin. While it wasn’t sold out, it seemed very close, and I noticed that the crowd was a pretty eclectic mix, ranging from teens with brightly dyed hair and gothy clothing to couples a decade older than me. I can certainly see how Uematsu-san’s music could have a universal appeal, but even so it was great to know that so many fans had flocked to see his work performed in such a venue.

Soon enough Arnie Roth took the stage, to the thunderous applause of the audience. In our interview with him earlier that afternoon, Roth expressed how unique it was to have an audience react with such fierce praise to an orchestra, and I couldn’t help but think of that as the crowd screamed their excitement.  Before beginning, he also pointed up to the balcony, where Uematsu and Hiroki Ogawa (director of Dog Ear Records, Uematsu’s record label) sat to watch the show.

I won’t spoil the experience of the show for you by describing it in clinical detail, but I will tell you that if you attend, you get to hear classics such as “Aerith’s Theme” and “Fisherman’s Horizon” from Final Fantasy VII, Maria and Draco’s opera from Final Fantasy VI, and much more (we were also treated to “Ronfaure”, a brand new song from Final Fantasy XI). While I deeply enjoyed every song, the orchestra’s performance of “Love Grows” was the one I most enjoyed (and by most enjoyed, I mean it made me cry like a baby).

Near the end of the show, Arnie Roth asked the audience for help. Apparently they are looking to take on a new song for the series, and they have decided to choose one of the battle songs. He asked the crowd to yell their approval for which one they wanted best, and while I can’t say which will be the winner in the end, it sounded as if Final Fantasy VI‘s “Dancing Mad” was the most popular at our show.

While the songs were played, the large screen above the stage showed scenes from the games. As a fan of the series since the original Final Fantasy, I found it really humbling to watch a retrospective of the beloved adventures I’ve had with so many deeply memorable characters, and I’m sure I wasn’t alone in that.

For the encore, we got a full chorus to join the orchestra to sing “One-Winged Angel,” but with a special surprise — Uematsu-san himself came down and sang with them! The audience pretty much lost their minds over that, and watching Uematsu-san bouncing along while singing his own music was definitely worth the price of the whole trip all on its own. It seems like everyone’s a critic when it comes to Final Fantasy these days, but for a true fan, you will have an unforgettable experience with this concert if you choose to attend it — something to remember for years to come. Do whatever you need to do to get there, but do not miss it!

This was, hands down, the best concert I’ve ever been to. Best performance, best sound, best crowd best…everything. I’ve never stopped being a fan of Nobuo Uematsu, but this concert made me remember why I love Final Fantasy, music, and videogames in general.

First off, the Grand Rapids Symphony was fantastic. They brought every bit of expression and musical passion to the performance of these songs from a videogame, and I came away imagining that both Uematsu and conductor Arnie Roth had to be extremely proud of how the concert came out. It was flawless.

As Colette said, we don’t want to spoil the surprise of seeing this concert in person, but let me share some of my personal highlights:

A phenomenal solo classical guitarist was brought out on stage for a back-to-back performance of some of Uematsu’s best guitar songs, Final Fantasy V‘s “Dear Friends” and Final Fantasy IX‘s “Vamo Alla Flamenco.” The guitarist’s performance was perfect, and with his strumming and soloing set on top of the orchestra, the whole experience was moving and emotional.

One of my favorite Uematsu pieces is “Love Grows,” a piano-heavy piece from Final Fantasy VIII that requires some fancy fingerwork. I can say that finally being able to hear this beautiful song live was something special. The piano player was fantastic.

Every piece that included the choir was a treat, with my personal favorite being Final Fantasy VIII‘s “Fisherman’s Horizon.” The combination of the lush choir, moving string parts, and the beautiful imagery being shown was enough to have me looking around to see if anyone else was moved to tears. Plenty were.

They scored a live battle!

An unexpected treat was the exclusive game footage, cutscenes, and art stills provided by Square Enix shown during the performances. My instinct was to not watch the screen and only focus on the music, but I soon noticed that new concept art, paintings, and high-resolution versions of videos we’ve only seen on portable consoles played alongside these pieces, making the experience even that much more special.

The audience was large, with estimates being near 2,000. I was glad to be sitting in a very respectful audience that held the music in high regard. While songs played, everyone listened intently. And when they were over: thunderous applause. Uematsu, who watched on from a high balcony, seemed very pleased with the crowd reaction.

Distant Worlds was a treat for this Uematsu/Final Fantasy fan. If you’ve ever felt an emotional connection to the art and creativitiy that went into any of the last twelve series games, you absolutely cannot miss this performance.