Tigon and Starbreeze Studios’s Escape from Butcher Bay floored me when it was released in 2004. The blend of superb story, gripping narration, and diverse gameplay was nothing less than satisfying. It was a surprise as well. Who saw a great movie-based videogame coming?

As gamers, we’re used to having to sludge through adaptations of movies we love. It seems like the titles we want the most ultimately provide the worst experiences. This happens for a variety of reasons (including our own unrealistic expectations), but I like to think that marketing is the root of the problem.

Regardless, Butcher Bay was different. It was focused on a small plot largely untouched by the Riddick movies. The elements of the game weren’t plucked from five seconds of film or a teaser trailer. And it rocked, unlike so many other movie titles.

Now, we’re on the eve of the next installment of the Riddick videogame series. I recently got a chance to talk to Starbreeze Studios about Butcher Bay and their brand new Assault on Dark Athena content. Hit the jump the for interview.

DESTRUCTOID:
Walk me through the process the development process if you will.  First, you guys decided to just remake Butcher Bay because it wasn’t backwards compatible, right? What made you switch gears and decide to add in the Dark Athena content?

Starbreeze
As you already know, the whole project started out as a remake of Escape from Butcher Bay as the original game couldn’t be made backwards compatible for the 360. On top of that the first game was never released for PlayStation, so there is a large audience that never got to play the game.

At the start of the project the plan was to just add a few levels and focus on lifting the previous game to the new consoles. This was the embryo for the Assault on Dark Athena campaign.

As we were working on the game we all felt that the new campaign needed to be bigger. We don’t want to make a semi-good release; we really want to do something that has an impact. As we liked where the game was going, a joint decision was made to extend the scope. Luckily, we hadn’t recorded or nailed the story yet, so it made sense to expand the campaign and re-write the story.

Most games start of being designed day one and then cut down as you realize you won’t make it in time. This project actually started out small and has grown all through the project. It is like a baby that has grown within our studio. 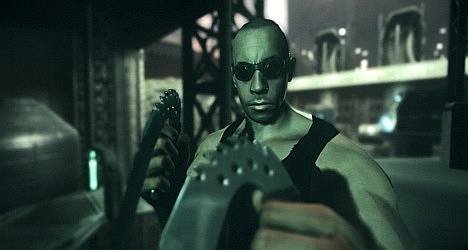 Were there any discussions with Microsoft about adding Butcher Bay before you decided to do the remake?

If you are referring to the problem with backwards compatibility we most certainly had a lot of discussions with Microsoft on this. We were trying to come up with a solution to how to make the game run on 360, but eventually we realized it wasn’t meant to be.

Recently, Ian Stevens said that the real sequel to Butcher Bay would come if fans want it. What are the benchmarks for a sequel? Is it already being developed?

Unfortunately I think Ian’s comments were taken out of context and somewhat misconstrued.  We haven’t been calling Assault on Dark Athena a sequel because of how heavily it’s tied to Escape from Butcher Bay, so we think of this more as a follow-up to that game.  But make no mistake!  Assault on Dark Athena is a brand new, fully featured, proper game with a new story, new characters, and 10+ hours of new gameplay.  It also includes Multiplayer (for the first time) and a ground-up remake of EfBB, so it’s easily the biggest game that Starbreeze has ever made.  We also think it’s the best game we’ve ever made.

Right now Assault on Dark Athena is the only Riddick game that we’re focused on.  The point Ian made was making is that we’re definitely excited about the Riddick universe and that the franchise has a lot of room to grow!
Are you working very closely with David Twohy? If you are, does the game’s script reflect anything he wanted to put into another Chronicles movie?

There’s a lot of coordination that happens at Tigon with David Twohy.  Right now he and Vin are working together on development of the next film.  So Vin and Ian have their eye on what we’re doing in this game and how it ties into the work that David is doing on future movies.  It’s really a great partnership!

Does Vin dig the game? What does he bring to the project?

Vin seems to really enjoy the game, especially the Multiplayer part.   And obviously Vin is very fond of the franchise.  The Riddick character is obviously very special to him.  He is pretty heavily involved through Tigon.  Ian Stevens was our Lead Designer on Assault on Dark Athena here at Starbreeze, and Vin hired him to manage Tigon, so we keep some pretty close ties.

But for most people his most recognizable contribution will probably be his voice work. His voice is superb for this game; I dare to say any game, as it is one of the best voices in the industry.

Hardcore fans will enjoy this game for several reasons. First and foremost we have expanded the Riddick universe, telling a story about the mercenaries’ role in it, with Assault on Dark Athena. In the process of developing the new campaign we have always kept in mind what we consider being the reasons why players appreciated the previous release, namely the mix of game play elements and the pacing of the game. I also think the new version of Escape from Butcher Bay will be worthy to revisit.

Casual gamers will appreciate this game for several reasons as well. To name two I would say the variety of game play the two campaigns offer and the degree of polish we have put into this package to make the experience as enjoyable as possible.   I think they will also find the multiplayer very accessible.  We have a very fun and friendly multiplayer game that’s easy to learn but of course difficult to master.

I love those narrative moments with Riddick. How many of those are there?

There are quite a few memorable quotes that have been added to the new campaign. I’m confident you will be pleased!

What’s with that little girl we keep seeing?

Lynn Silverman is one of the first characters you encounter in the game. She is a survivor from a hijacked ship that is doing her best to avoid detection by the mercs. She will play an important role in the game, which will be revealed once you play the game.

How will multiplayer work? What are the modes? How many players at once?

We are very proud of the multiplayer component of Assault on Dark Athena. We’ve had multiplayer up and running since the very beginning of the game’s development, so we’ve had a couple of years now to play it, iterate, polish it, and get to a place where it just feels awesome.

We are featuring 6 modes, of which 4 are classic mode (TDM, DM, CTF and Arena) and 2 modes are completely new.

‘Pitch Black’ is the mode that probably will capture most of the players to begin with, as it very easy to learn and offers a mode that is very unlike the traditional MP modes. It’s a 7 player mode, where 6 players play as mercs trying to hunt down and kill Riddick. The player that kills Riddick becomes him the next round. As there is no lightning in the map Riddick has a huge advantage being able to see in the dark. The mercs only can only see what their flashlights are showing.

‘Butcher Bay Riot’ is the other unique mode. This is a fast paced three team mode, where guards, mercs and prisoners are fighting over a power cell. Each team has to take the power cell to one of the opposing team’s base to win the round. This mode requires a lot of team collaboration and offers a more skill based game play than most other multi player modes. 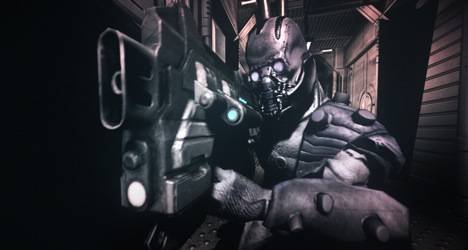 Do you think you’ve had enough time with the project? How many last minute changes will there be?

There are always last minute changes.  Even when you’ve done everything right, if you have an opportunity to do more and you’re passionate, you will.  So we do.  For this project we really feel that we’ve had more time and opportunity than normal and we’ve taken full advantage. The transfer to Atari really helped out and gave us the opportunity to enhance the game even further. We have been working hard all the way up to the finish line and now we feel really proud with the end result.

Will this game be backwards compatible with the Xbox 720?

Hopefully, but I can’t promise anything.

Thanks for your time. Is there anything else on your mind?

We are excited about this release. The consensus within Starbreeze is that this is our best game thus far. It’s the biggest game we’ve ever made and the most polished game we’ve ever made.  We really hope that people will enjoy it and have a great experience as they tackle the Assault on Dark Athena, smash each other in Multiplayer, and revisit Escape from Butcher Bay (or play it for the first time)!