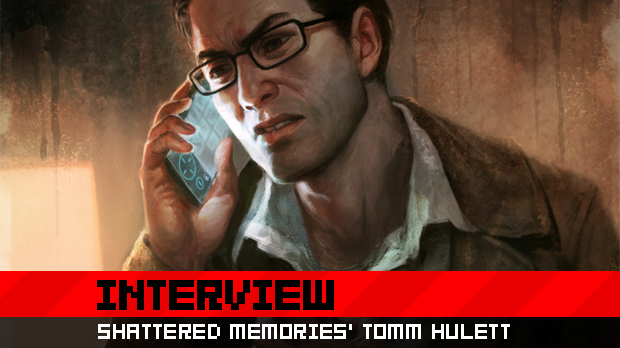 All Shattered Memories jokes aside, once we started to take a closer look at Climax’s upcoming contribution to the world of Silent Hill, we realized we had quite a few questions we wanted to ask then. Being the Silent Hill purist that I am, I’ve spent an obsessive and borderline unhealthy amount of time on all the previous games in the series. I had to know more!

Lucky for me, Konami’s Tomm Hulett, lead producer on Silent Hill: Shattered Memories, was willing to let me pelt him with questions, not to mention ask a lot of the annoying fan stuff. Will Pyramid Head be back? Will I hate the lack of focus on combat? Will this make devotees of the original Silent Hill rage and hurl the Wiimote at their TVs? Follow me past the jump to get the skinny on all this and more.

Destructoid: Whether it’s called a remake or not, Shattered Memories does reuse the familiar protagonist of the first Silent Hill, Harry Mason. Since the original game is a beloved classic, what made you decide to try recreating the story differently? Was the team concerned that this choice might upset hardcore fans of the original title?

Tomm: Well it’s important to remember it’s a re-imagining.  Not a port, not a remake.  So yes, you are still stepping into Harry Mason’s shoes, and you’re still searching for his daughter Cheryl.  But everything after that is new or changed.  Re-imagining the first game was a conscious decision, because the Wii has a huge audience of gamers who maybe haven’t played Silent Hill before.  So it wouldn’t be fair to jump right into Silent Hill: The Game After Homecoming, would it?  At the same time, Harry Mason’s quest is a very emotional, impactful one, so there was a lot of value in allowing players to start there.

But what about the people who HAVE played the first game or seen the movie?  They’ve been there and done that already.  However, we know just what they loved about it.  We know all the details they hold dear.  And we know by twisting those, we can draw them back in, and make them care about this story again.  Those hardcore SH fans know that Silent Hill is about surprises, and having your mind play tricks on you … and that’s just what we’ve done with the plot itself.

Destructoid: Do you believe there is a Silent Hill “timeline”, and if so, how does Shattered Memories fit into it?

Tomm: Of course there is a Silent Hill timeline.  But purists don’t need to worry, Shattered Memories takes place in its own little universe, since it’s a re-imagining.  This isn’t anything new to fans, as the movie had its own world, the comic has its own world, and so on.  We re-imagined the survival horror “rules” with this title, and setting Shattered Memories outside of Silent Hill’s timeline allows us a similar freedom.

Destructoid: The Silent Hill universe has always featured fog as a part of its setting. What made you decide to remove this element and replace it with ice? Does this new element have a symbolic meaning in the game?

Tomm: Well remember, the first game also featured snow (not ash, like the movie suggested).  The fog factored into the themes and storytelling of the early titles.  Similarly, our heavy snow is there to obscure your vision and establish a creepy atmosphere.  Just like any element of a Silent Hill game, the snow and ice definitely have a thematic impact on the storyline.

Destructoid: Some series fans complained that Silent Hill: Homecoming focused too heavily on action and that playing in the role of Alex Shepard made gamers feel “too capable” when it came to combat. Did this factor into your decision to remove combat from Shattered Memories? If not, what brought the team to the decision to remove it?

Tomm: We’ve been hard at work on Shattered Memories for a long time, so it was not a direct reaction to any feedback from Homecoming.  But, we have noticed that a lot of recent survival horror games have started focusing far more on action than “survival.”  (This is not a knock at anyone, Silent Hill is just as guilty.)  Really, they’re action games with ickier monsters.  Running low on ammo happens in any game with guns — it’s not unique to the horror genre.  So we wanted to step back, clean the slate, and go back to the roots of what makes a “survival horror” game.  How would we scare the player?  What would we allow them to do, etc etc.  To that end, we did not “remove” combat.  We built a game where the action is not about killing monsters.

Destructoid: How deeply will the psych profile that’s been mentioned in previous interviews factor into the gameplay? Can choices you make affect your experience with Shattered Memories to a point where you suffer major consequences, such as death or losing chances to do certain things?

Tomm: I can’t go into too much detail about the Psyche Profile at this time.  I can say that it changes based on everything you do (you don’t get “choices” per se, that’s traditional game talk!  Our game is watching you).  However, you will never reach a situation where you have “missed” something.  When Silent Hill closes a door, it opens a window.

Destructoid: The famous Pyramid Head was once thought to be exclusive to Silent Hill 2, but he’s since made an apperance in Homecoming, so some would consider the character free to appear in any SH title. Will he appear in Shattered Memories? If not, is there a reason the team chose not to include him?

Tomm: I subscribe to the idea that Pyramid Head was unique to James Sunderland in Silent Hill 2.  He’s not just some guy who walks around with a big knife.  I think if anyone was going to use Pyramid Head again, they would need a really good reason, and they would have to let him serve some kind of purpose.  He was a heavy thematic character in SH2, and less so in SHH or the movie.  Without the emotional ties to James, he loses his impact and is just a cheap scare, and that’s doing a disservice to such an iconic character.

Destructoid: Climax has already made clear that the Wii version of Shattered Memories will be the definitive one. Will the PS2 and PSP versions be straight ports, or can we look forward to any extras for those two versions?

Tomm: Yes, Wii is the lead SKU for this title.  That said, we are working hard to make sure that PS2 and PSP players don’t just feel like they’re playing a watered-down Wii title.  There is a separate team at Climax working on the Sony versions to optimize them for their respective platforms.  While the controls will obviously be different on the Wii, we want all players to have an optimal Shattered Memories experience.

Destructoid: The Wii is thought of as a family-friendly console, as you know, but gamers have been vocal about wanting more mature games for it. Will anything about Shattered Memories be toned down with the Wii’s biggest demographic in mind, or can fans expect the same level of disturbing story and terrifying creatures that we have enjoyed from all the other SH games?

Tomm: We know there is a large contingent of hardcore and lapsed gamers on Wii who are clamoring for “real” titles.  Silent Hill is real in every sense of the word.  This is not a gameplay spinoff, it is a real Silent Hill title.  These are real gameplay advances, not cheap control gimmicks.  It’s not a port.  The rating is still pending, but rest assured it will be scary.  At no point did we come to a crossroads and decide “well let’s just do it this way because it’s on Wii.”  It will twist your mind and creep you out just like any other good Silent Hill game would, and all the choices we made were to serve good gameplay or a compelling story – never a misguided notion of “Wii is for young’ns.”

Destructoid: Thanks for your time, Tomm!