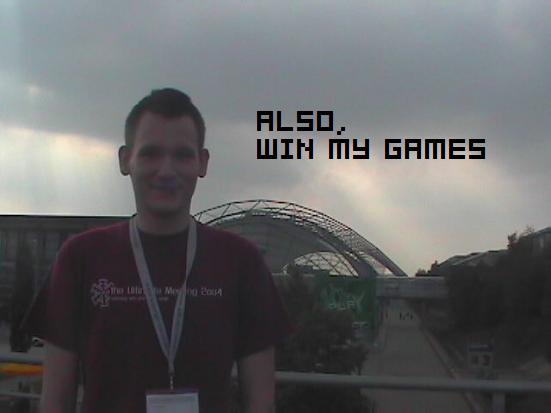 Way back in the mists of time (Well, only a couple of months ago, but I’ve never been one to stickle when there’s an dramatic effect to be had) you might have read my post-Leipzig Games Convention story on Redspot Games, an independent German games publisher which sprang out of the Dreamcast-Scene Web community and now dedicates itself to putting out games on everyone’s favorite prematurely dead format, as well as one or two others. Not only are these giving me cool new things to play on my Dreamcast, they’re also a very cool and very fun bunch of people, and really helped my GC go with a swing this summer. I like them rather a lot.

After the jump you can find a longer interview with Redspot’s Max Scharl and Nicky Werner which I conducted with the assistance of solid gold member of the Dtoid army Lukas ‘3R0T1C N3RD’ Cerin, wherin we discuss Redspot’s origins and future, the building of an international Web community with the assistance of Sega themselves, making the second best game on the GP2X, ad just how in the Hell you manage to sell games for a dead format anyway.

And also, yes, Max has very kindly given me six copies of Redspot’s recent side-on DC shooter Last Hope to give away to you lovely people. Details at the end of the interview, which in time-honored fashion, is after the jump.

Destructoid: So how did the whole thing start?

Max: Well in 2003 we established Dreamcast-Scene as a web site. There were already sites around like DCEmulation, but we felt like “Okay, there’s this whole emulation thing, but there really has to be a site about the whole history of the Dreamcast.” We needed some kind of Wikipedia for the Dreamcast. So we started the project with software similar to what they use on Wikipedia and started writing articles, and it grew and grew. Many people came to the community and also put their own thoughts into it, and at the end of a year we had contact with Sega Germany – I’d had contact with them before, because I was an editor for various German videogame magazines. They were like “Okay, that’s cool. Why don’t you use the Dreamcast.de domain?” They also offered us the Dreamcast.jp domain, so we used them for different languages. We now have six different languages and everyone translates the articles into different languages.

Right after it started it was only a web site with the history and the news, but now we have new goals like helping small developers or individuals who’d like to do something on the Dreamcast but don’t have the necessary hardware.

Nicky: We like to guide them and show them how they can do this and that, and give them a little bit of help.

Max: The whole scene should be around one place and sharing its ideas. And money if they need money. And hardware. The basic idea was to find a place to have everything for a Dreamcast scene available.

Destructoid: There is such a strong community around the machine and people are still so passionate about it. It just makes sense to keep them all together.

Max: Yeah, exactly. In the end we recognized that we can’t bring everyone together, but we wanted to make a basic ground for the whole scene. There’s a very big scene in Spain and in France but they both have their own communities, and to navigate Dreamcast-Scene you have to have basic English. I think many Spanish people don’t like Dreamcast-Scene as much as DCiberia.net, because that’s in their native language. Of course we recognize that we can’t bring everyone together, but we want a basic ground where we can support everyone from the whole scene with everything they need. Even money.

Destructoid: So have Sega been fairly supportive of the whole thing?

Max: They were like “Okay, that’s cool, that’s fine.” We don’t deal with Sega Japan because they don’t care any more. It’s not their concern right now because they have to bring money back into the company and grow with their software titles, not the hardware. We contacted Sega Japan and they never had much interest. Not in a positive way, but not in a negative way either, which I can understand.

Destructoid: How many titles have you got out at the moment?

Max: Well, you have to remember there are two different things. There’s Redspot Games and there’s Dreamcast-Scene. Dreamcast-Scene is the whole non-commercial thing and Redspot Games is a young company from Munich. Our main goal is to bring software titles to classic platforms with classic gameplay. We started three years ago, but in February this year we released Last Hope for the Dreamcast. We’re going to release some other Dreamcast titles as well as a GP2X title, and maybe we’ll have a Nintendo DS license very soon.

We have two new Dreamcast titles on the booth this year. The first one is Dalforce, programmed by some guys from the UK.

Max: DJ Sasha? Yes, he did the soundtrack for Dalforce. We Googled his name and looked on Wikipedia and it was like “Oh my god!” He was in second or third place in the UK chart and he was world famous.

Max: No, that came from the original developer. Dalforce grew out from another project which was shareware on the PC. They used it for the groundwork of Dalforce, but it now has new levels, new sprites, new effects… Everything looks like new and feels like new, but it came from that original idea.

And the other one is Wind And Water Puzzle Battle. It’s a classic puzzle game, but it also has a lot of other stuff working around the puzzle game, because we have about forty mini-games. There’s a classic Outrun style game for example, and it’s all embedded in the gameplay. There’s also a story mode with a map like in Super Mario World, where we have one hundred different stages and you have to battle with characters based on the original developers. They’ve all got their own sprites and they’re all like “Hey, I created this game. I’m going to kick your ass.” The whole game’s very funny and the whole story mode is all about making fun of ourselves.

We’ve had very very good feedback. People have been saying “Oh my god, it looks like a Nintendo DS title, if not better”. It’ll be coming out for the GP2X by the end of this year and for the Dreamcast next year. We wanted to have it as a kind of prestige title for us, to say “Hey, we can not only make shareware-looking games, we can make games with a lot of content that are a lot of fun, and that are high quality, just using the old styles.”

Some GP2X fanboys have been looking at it and saying [squealing fanboy voice] “Wow! Great! Awesome title!”, and we were like “Yeah, it’s only the second commercial game on the GP2X so it has to be at least the second best. [laughs]

Lukas: You’ve got to put that on the box.

All: Second best game ever! [Laughter]

Destructoid: So how are you supplying the games? Is it all going through the Redspot Web site, or have you got separate distribution?

Max: Well for the Dreamcast we took a trip over to Japan and Hong Kong to look for distribution partners for the Asian market, and we found two wholesalers in Japan and one in Hong Kong. They distributed it very very well. In Chibuya in Tokyo in fact, we have even found some gamer stations with Last Hope in them, so they’re selling it in the stores as well as on the internet.

In Europe it’s a bit different, because in Europe the Dreamcast is more dead. I don’t like that word, but it is more commercially dead. So the main problem we have in Europe is that we can’t give it to wholesalers, because they’d be like “What the hell?”. We’ve actually been contacting the retailers. We’ve been phoning but it’s like “Hello, we’re Redspot Games, sell our stuff? Oh no? Okay, thanks a lot.” So we have only a few contacts in Europe. About the best thing to do in Europe is to order it from Play-Asia. [laughs]

We’re working on it for when we release the first Nintendo DS title. I’ve had business negotiations at the Leipzig booth and it’s gone pretty okay, but for the Dreamcast it’s pretty difficult. For GP2X though, we have business negotiations with Gamepark Holdings, so let’s see what happens.

Right, and now onto the competition. With the prizes being new Dreamcast games, I only want them to go to those who seriously love the machine, and so to that end you’re going to have to work to prove your fandom. What I want from you guys is a written tribute to the lost but not forgotten format in the form of a poem. Yes, a poem. I’m English, what can I say?

Your writing can take any literary format you want. Sonnet, haiku, free verse, all these and more are available to you, and you can make your poem as long, short, serious or funny as you like. All entries must be posted in your community blog (and if you haven’t got a community blog, get one here, enter the competition, and then realize in how many other ways being a registered member of Destructoid improves your life – Hint: All of them) under the title of “Dreamcast Love Letter”, followed by the title of your poem. This part is important, as it makes it actually possible for us to find all the entries, so if you don’t do it, I’m afraid you won’t be eligible. Entry will close on the 18th of November, so you have exactly one week before the judging starts. Get writing and see if any of you can make me cry.