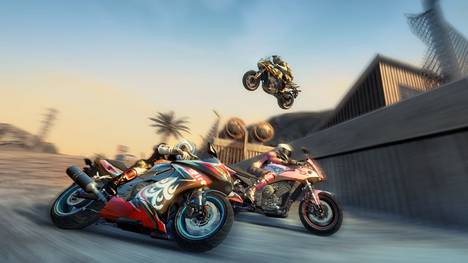 I got a chance to speak with EA’s Product Marketer, Kevin O’Leary, during the EA Showcase 08 last week. While people were coming around to play with the new bike update for Burnout Paradise, I asked Kevin all about what we can expect in this free update coming from Criterion.

Kevin covers a variety of topics such as why there is no boost for bikes, why there’s no wrecks, the new day and night cycle, why Burnout Paradise is coming to the PSN and not Live, and tells me what’s up with the planes. Hit the jump to read all about it.

DESTRUCTOID: Basically, give me the run down on what this update is going to include.

Kevin O’Leary: So what you’re looking at is what’s called Burnout Bikes. This is going to be coming out in the fall from Criterion Games. CriterionGames.com isdoing a ton of different support packages. As you know, Cagney just came out recently with a whole bunch of online modes.

This is Burnout Bikes, a whole new step for the team. This is the first time they’ve ever had motorcycles in a Burnout ever before and are coming straight to Paradise City for you to enjoy. So a couple of different components that you’ll be getting in this pack, which is going to be 10 hours of gameplay, that’s a pretty conservative estimate actually.

As you can see what happened here, he [the player] just beat a daytime Road Rule. One of the things you’ll be able to get is that you’ll be able to rule all the roads, day and night, with motorcycles, separate from cars. You’ll also have a different license, so just like you had a car license; you start with a basic learning license for motorcycles. On top of that, you’re going to have a whole single-player juncture to go through for unlocking events and opening up new motorcycles for you to use. As well as 70 online freeburn challenges that are all bike specific. There’s a whole lot in this pack and it’s free, coming to both Xbox 360 and PlayStation 3. There’s a lot of stuff coming.

When you crash, why doesn’t the bike explode or wreck like the cars?

With the bikes and crashing, because of our E10 rating, there were some rating questions with that. But, on top of that, the bikes are more focused on a social experience and going blistering fast and stuff like that. We’re not focusing all on the crashing of the bikes. We really want you to focus on having a good time with your friends, doing ridiculous jumps, and having a good time with the motorcycles in Paradise, seeing it again with a different vehicle.

With the whole speed thing, like you were just saying, why was the boost feature taken out for the bikes?

That’s because the bikes in general are just ridiculously fast compared to cars. If you put a car right next to the bike right now, it [the car] wouldn’t be doing so well. So the boost is a little overkill for the bikes. It kind of goes into what I was saying about how the game is always changing. We’re bringing in new changing content and we think of this [The Bike Update] as version 1.0 of bikes. In version 1.1 of bikes may have boost, may have all kinds of different stuff. A large portion of that is based on player’s feedback. Do they like the bikes the way they are? Do they want boost? Etc.

Earlier, you were saying there are no racing modes for the bikes?

The races are all in single player mode. What you can do with bikes online is the Freeburn Challenges. They [Criterion] are looking into doing races for the bikes.

Can you customize your character?

Yeah, you can. You can have a male and female rider, make them the style that you like. And there are different kinds of bikes. You start immediately with two in your junkyards and you can unlock up to four total if you complete through the single player progression.

So there’s only going to be four bikes?

Yeah, in the first pack. 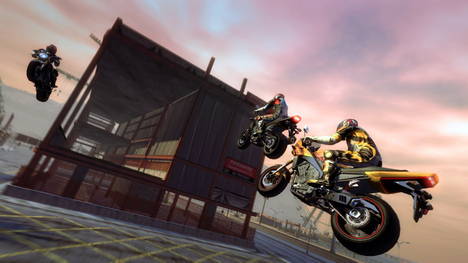 What made you guys decide to bring this game to the PSN?

There’s a couple of different things. Obviously, we’re doing a lot of really unique and creative things. The team at Criterion is definitely on the edge of what’s cool and what’s coming for videogames. It’s all part of our Year in Paradise, as we’re calling it. This is where our team has decided to support this game as much as possible. And that includes giving people new ways to get the game into their hands. The free updates like Bikes and Cagney, and stuff like that. It’s all a joint combination. We want to go straight to our consumers, straight to the people that love Burnout, trying it out the first or maybe the fifth time, all that sorts of different stuff. Just another way to get the game in people’s hands.

How big is that going to be?

I don’t know the exact file size, but it’s not that large. Could be the size of a large demo.

We aren’t announcing the price yet, but Paradise is at a $29.99 price point right now [in retail].

Will Burnout Paradise get Trophies?

Yes, we will have Trophy support. We don’t have an exact release date on that, but it’s definitely coming, probably this Fall.

Will you have do everything again to earn the Trophies?

I don’t have an exact answer for that, but they are looking into doing retroactive and a lot of that is based on first party as well, if Sony allows that.

Any plans on bringing this to Xbox LIVE?

There’s a lot of restrictions on Xbox Live titles and the full game wouldn’t be able to fit on there [due to their file size limits]. I don’t think we’re looking down that road quite yet. But nothing’s out of the question for Criterion and what they’re trying to do next. 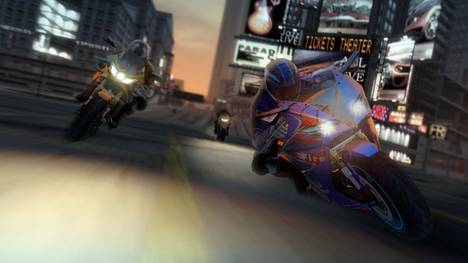 Can you do tricks with the bikes?

The bikes are focused much more heavily on the Freeburning and the social aspect. You can do wheelies!

How will night and day play a factor in the Freeburning?

Freeburn challenges is not as big of a difference as it is with the single player. In single player, you actually have night and day specific events. It’s essentially a traffic monitor. If you’re out in the middle of the night, there’s going to be a whole lot less cars. And vice-versa, there’s going to be more cars in the day. At night, you have a little bit less time to complete the challenge because there’s fewer cars on the road and you’re expected to be hauling as fast as you can through the city. It’s all about knowing those shortcuts, knowing the city.

Will it be based on your real time clock on your 360 or will it be fast tracked like GTA?

So, how’s the plane update coming along?

Great. Thank you very much for your time, Kevin!