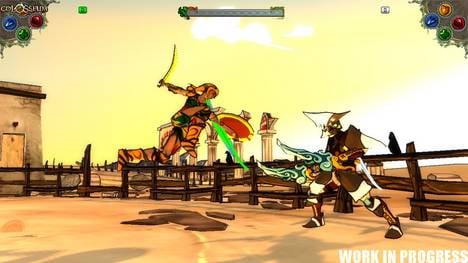 Many gamers got a surprise first-glimpse of Shortfuse Games’ upcoming XNA-developed title, Colosseum, during Microsoft’s E3 2008 press conference. The inclusion of the multiplayer arena-fighter was a surprise to the developers as well.

“We were actually watching a low-quality feed [of the press conference] on Gamespot,” Colosseum producer Sebastian U. Badylak told us, “and were all like ‘Awesome!’ when we saw it, which of course felt really good for us.”

Gamers’ reaction to the short clips has been pretty positive as well, and with Microsoft offering up very little information, many were left wondering: “What’s this Colosseum nonsense all about?”

We decided to go straight to the source, and had some of the folks at Shorfuse tell us a bit about Colosseum and game development for the Xbox 360 using XNA tools. The full interview — along with some exclusive Colosseum screenshots — can be found after the jump. 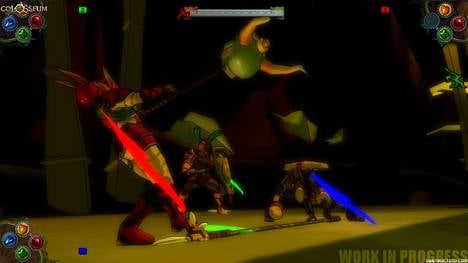 DESTRUCTOID:
Tell me a bit about your XNA game, Colosseum.

Sebastian U. Badylak, Producer:
Back in early 2006, when the project started and the first demo was created, there was this vision that Colosseum should be a MMO Fighter for PC. This was during a ten-week project at the university, I might add. Needless to say, that didn’t work out.

However, later that year, we decided to rethink the whole concept and start over. At the time XBLA was ‘the next big thing’, and obviously we wanted to be a part of it, and still do. What we’re trying to create now, is a simple fighting game that anyone, regardless of previous fighting game experience, can enjoy. We’re also focusing on multiplayer, both local and LIVE, for more than two players simultaneously. We want that great couch-mentality where you and three of your friends get together over a beer, team up two on two and play death match or one of the other modes and get all pissed off at each other.

I remember a summer when me and my friends would get together every single day and play Tekken 3. By the end of the day people were all like – “If you choose Eddie Gordo, I’m gonna leave and never speak to you again. Ever!” The next day we were all there, doing the same thing all over again. That’s what we want Colosseum to be, only where two of you don’t have to wait for your turn.

DESTRUCTOID:
The game has an interesting, cell-shaded art style. Was this an intentional decision, or due to limitations of the hardware?

Lars Håhus, Artist:
After our school project, we started a new pre-production phase where all the involved artists just sat down for a few weeks and drew whatever we felt Colosseum was for us. There were several pretty interesting ideas that came up, and as time went on we adopted some of them and rejected others. The images we created during this period will later be posted on our web site, clearly showing how our style has evolved from realistic rendering to what we see today.

Then one day, Niklas [Åkerblad] drew a concept that we all felt could represent what we wanted to do with Colosseum. We also realized what we were looking at was a detailed cartoon style, something we now have achieved with normal maps, spec maps, toon shading and outlines. Niklas then became the obvious choice for the position as art director. 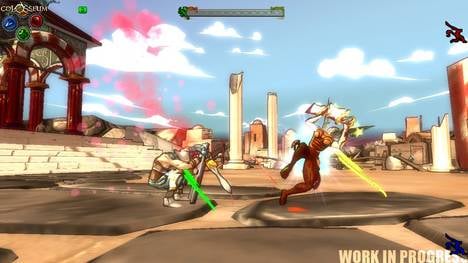 Pontus Birgersson, Lead Programmer/Technical Director:
The decision was intentional, we felt that a cartoonish rendering style would align better with our vision of Colosseum than a realistic renderer would … tech did not mind.

As for the limitations, it’s hard to say since developing for XNA pretty much leaves you without any proper tools for finding bottlenecks on the Xbox. We’ve done some manual investigations and it seems we’re going to need to squeeze more horse power from the CPU as well as the GPU but that will have to wait for feature complete.

DESTRUCTOID:
Microsoft’s Community Game initiative is, obviously, driven by the community. How closely knit do you find the community? Do you find that developers are more than willing to share “secrets,” tips and even code? Or is there a lot of competition in “the scene”?

Birgersson:
The community is great; it’s a valuable resource to us. No matter what your question is, there are almost always a few people with answers. As far as I know there are no secrets within the community, at least no one has told me they kept one. Code sharing is quite common, most of the time it’s no problem getting code samples if you can’t concretise the solution yourself.

Since there are some veterans within the community, you are might get answers from someone who has been working on a major title which they for legal reasons can’t share code from but are often more than willing to explain the gist of it.

DESTRUCTOID:
Going back to Colosseum, I had a chance to play around with the title, and thought it was interesting that you decided to map all of the combat to the right analog stick.

Another high-profile game, Too Human, takes a similar approach, but it’s not the first; off hand I think Namco’s Death by Degrees and EA’s Catwoman (and even Fight Night) had a similar combat system. Why go this route with Colosseum?

Badylak:
In terms of intuitiveness I think that the stick lends itself very well. Really inexperienced players don’t have to worry about which buttons to press, because there is only one “button” — the stick. It doesn’t really matter in what direction you tilt it; you’ll deal a fair amount of damage just going at it at random. Combined with how freely and easily you can move your character in the arena it creates a pretty neat pick-up-and-play experience.

Then there’s this whole other level of the stick, where more experienced players can do combos, charged attacks and “perfect swings.” The “perfect swings” is basically when you make a sweeping motion with the stick, and it’s something that I really like. So we’re tinkering with it, and will include it in the game if it turns out good.

DESTRUCTOID:
The version I played seemed a bit light on features, with a basic tutorial and then a “quick play” that kind of throws you into a battle. How fleshed out do you think the final game will be? Is there plans for a story mode, or an arcade mode that a player can progress through?

Badylak:
Yes, there will be a single player campaign, though we don’t want to go overboard with some kind of epic tale. Instead we intend to keep it short and simple, with a lot of fighting and replayability. We want that straight-forward arcade kind of feel to it. Plus, as you progress you’ll unlock equipment to customize your gladiator and make him or her all pretty-like.

DESTRUCTOID:
How many people are on the team developing the title?

Badylak:
Including The Big Boss we’re 11 fine specimens at Shortfuse Games. We have three programmers, four artists, one designer, one QA management-guy and then there’s me acting as producer. 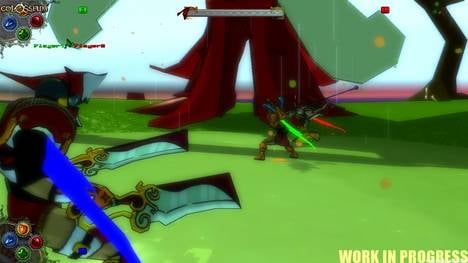 DESTRUCTOID:
James Silva, the one-man-designing machine behind the much-talked-about XNA title, The Dishwasher, wasn’t a full time game designer when making the title, from what I understand. Any similar success stories you can share from the Shortfuse Games team?

Badylak:
I personally enjoyed The Dishwasher very much, and James really deserves the success.

As for us, we’re still waiting to see the success part in our story, but being featured at the Microsoft presser at E3 is a good sign that we’re on the right track. We were actually watching a low-quality live feed from Gamespot or somewhere over at the QA-guy’s home and were all like “Awesome!” when we saw it, which of course felt really good for us. Moving on, we all come from the same (Swedish) game development education (except The Big Boss; he’s from business school). Some of us have recently chosen to add another year to that education to pursue a Master’s degree. Basically, we are students and completely new in this industry.

DESTRUCTOID:
Was it always intended as an XNA game, or was this something that was in development before Microsoft revealed their grand plan?

Badylak:
When we started re-designing Colosseum, XNA had just been announced, but wasn’t released until a few months later. During those months we were constantly looking for a fitting game engine, but didn’t find one. We read that XNA would be fully compatible with the consumer Xbox 360, got very excited and very eager to get our hands on it. Once we tried it we were pretty much convinced. 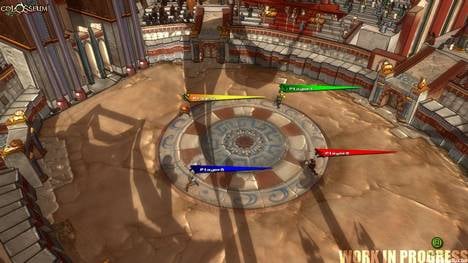 DESTRUCTOID:
Microsoft tells me that the game should launch this Fall when Microsoft Community Games goes live. Are you on track for that, and given the opportunity to set your own pricing, is that something you’e thought about yet?

Badylak:
We’re constantly thinking about how to make a living in this industry, because we’re still small time and would really love to be able to make games for the rest of our lives. Now, Community Games is very interesting and XBLA is too. Naturally, there are pros and cons in both cases and my question is: Will Community Games be the next big thing — because indie games are sort of a pop culture phenomenon — or will people feel that indie games aren’t worth spending money on and expect them to be free? That’s something we’d appreciate comments on from the readers.

About the launch date; obviously, we really want our first commercial game to be a good one. So we’re going to spend the next few months working hard on it and hopefully have it out by the end of the year or early spring 2009.

Speaking of work; we actually have a contest on our Web site, where you can design a sword and if we like it we’ll put it in the game. A chainsaw-sword would be awesome…

DESTRUCTOID:
So do you guys stop at XNA and Xbox 360, or do you have any plans or desires to work on other platforms?

Badylak:
We really want to make games for all of the three major console brands, but it’s a long way to go and we have to prove ourselves by starting small. At this point Microsoft offers a great way for us to do that, so we’ll start on Xbox 360 and see where takes us, but ultimately it’s up to the team to decide which platform they feel that they want to work on.

Thanks to all of the folks from Shortfuse for taking the time to chat with us. Colosseum was chosen as one of our “Top five XNA games to watch for,” and should be available later this year with the launch of Xbox LIVE Community Games.