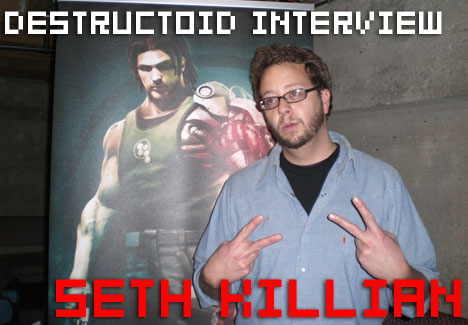 Oh boy. So while good old Hamza Aziz was busy playing Resident Evil 5 and losing rounds of Bionic Commando (don’t worry, CTZ, I suck at it even more than you do), I was getting down to the nitty-gritty.

Like a regular Geraldo Rivera, I was hitting up all the important figures and complaining about the lack of Tatsunoko vs Capcom for the US of A. Luckily, there was one man there who could handle my nasally voice for more than three minutes, and that man is senior community manager for Capcom, Seth Killian.

Now listen up! Seth addressed some of the latest news coming from Capcom, commented on both Tatsunoko vs Capcom and Marvel vs Capcom 3, and offered some guidance for new players to the pretty great SSF2THDR. Listen to him, as he’s both a tournament-level Street Fighter player and a former philosophy instructor. This man is serious business!

Hit the jump for the full Q and A!

Destructoid:
Starting simply, why isn’t Tatsunoko vs Capcom coming to the United States?

Seth Killian, Capcom’s Community Manager:
We’ve had some licensing challenges, and if you’ve read the Capcom-Unity blog, I’m a big fan of the game and posting all the material I have on it up there, cause it’s a great, great fun new experience, but the licensing hurdles …

You know, Tatsunoko is all owned by…Tatsunoko in Japan. And in the West, they’re not. A lot of challenges there, but we’ve definitely recognized interest from a lot of people, and we’re looking to try and find a way to get Tatsunoko vs Capcom action to Western fans.

So there is a chance Tatsunoko vs Capcom will come to the United States?

What do you say to the ESRB rating Marvel vs Capcom 2 for the Xbox 360 and the PlayStation 3?

Uh, I’m not familier with where the rating is right now. I’ve been on the road for about a week. [laughs]

Well, you know it happened a few months ago?

Oh the fact that they had some sort of rating scandal? Yes.

The ESRB has been challenged, yeah, it’s been a situation like that for a while, but no comment on Marvel vs Capcom 2. We know that’s another super popular fan game, yeah, it’s something we’ve been thinking about. Nothing to announce right now. 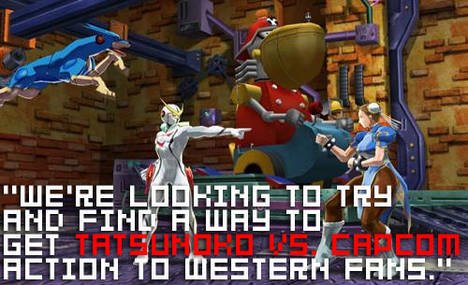 Anything for Marvel vs Capcom 3?

[Laughs] That’s definitely a whole other hurdle to climb. We love Marvel, and I know they’ve been on record saying that they love our games as well, so hopefully we can work something out. That would be a fantastic game for the fans.

What does Bionic Commando and Resident Evil 5 represent for Capcom in 2009?

I think Resident Evil is one of the more visually stunning games out there no matter what, and on top of that you’ve got the survival horror elements, as well as the new action-oriented gameplay and control schemes. So I think it’s part of the new direction, for Capcom is really embracing action, sort of taking the roots of the company.

So obviously, Resident Evil and Bionic Commando — both legacy franchises — both moving in interesting new directions as well in their own right. I think it’s an embrace of the West with a sort of a recognition with the Japanese roots, [it’s] what makes those games so cool.

Other than Resident Evil 5 and Bionic Commando, what other big games can you say you are personally looking forward from Capcom in 2009?

Well, definately Street Fighter is very close to my heart. I’m super looking forward to seeing more people getting a chance to sit down with Street Fighter. Dark Void, as well. Every time I play that game, it just keeps getting better and better. It’s got some really great feels and it’s starting to get unbelievably beautiful as well. I think people are going to be really excited to play that, and there’s a few downloadable titles as well that I’m looking forward to like Flock. There’s a map editor in there, and stuff like that. I’ve been goofing around with that. It’ll be fun to see what people do with that as well.

As far as downloadable games and downloadable content, can you mention anything Capcom’s got in store for us?

Well, I think what we’ve got out there is pretty awesome. I mean, right now I’m mostly thinking about Flock as far as our downloadable issues, but we do have some more stuff coming up. More news on that in the future, but I think people are going to be happy. Set your expectations to high, and you’ll be satisfied with what Capcom’s got. We’re really trying to make great games, and also listen to what people want and try and follow through on that. 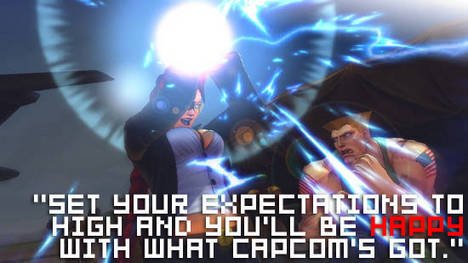 Alright, so to sort of wrap things up, I want to know, who is your main for Street Fighter IV?

[laughs] Right now I’m playing a lot of Rufus! Rufus Rufus and Rufus! He seems big and fat, but he’s really fast, actually, so I like characters that can generate a lot of pressure and stay on you. He’s one of them. Definitely Balrog, and I’m also playing Able a lot. Sorta mix it up and go for a lot of grapples.

Yes! Give Blanka a try. Actually, Cammy has gotten, well, for anyone who has tried Cammy before and couldn’t really play her cause she was really hard, she’s gotten way easier and way more fun. Give her a try. She’s gotten really strong. I think she’s gonna be a lot of fun. For an online fighting game, you can’t do better than HD Remix. It’s the nuts. 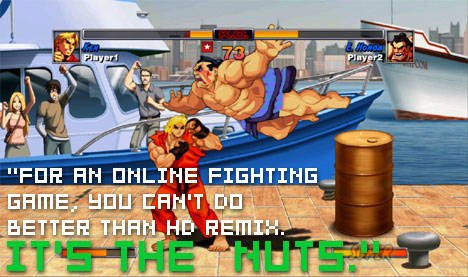 It is really good! I mean, I don’t really play fighting games, but … damn, son! That is a good game.

Are you guys gonna keep Street Fighter II on Xbox LIVE? Is that gonna stick around, or is that kinda done and in the past?

You know, that game is, I think, still the best-selling title on Xbox LIVE of all time. I don’t know if that’s the case. If it’s not, it’s pretty damn close … I think it actually is true.

So that’s a massive success. Maybe old school gamers will, you know, people looking for a different experience will [purchase it]. You know, hopefully they’ll get HD Remix, because we’ve come a long way in terms of the technology. It’s still on there and it’s still selling! As long as fans want it, it’ll be there.

Thank you very much, I appreciate this.