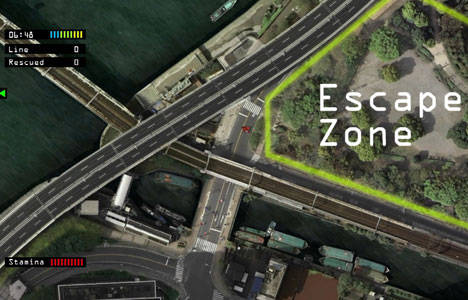 So Tron and I were planning on doing a regular ol’ review of Hindustan Electronics’ new title, The Last Guy. But, a few complications arose. Namely, my copy of the game had no sound, and Tron had constant visual problems with his TV.

So, in the interest of fairness, we decided to abstain from doing this as a review proper, because the problems here were due to post-production problems. What you’ll find below is just like any sort of review, minus a score at the end, and the “take this with a grain of salt” idea should already be implied.

So, let’s get into this game.

You’re part of a government organization attempting to rescue as many survivors as your possibly can from over a dozen real-world places in England, Japan, the U.S., and other places. I say rescue because there are zombies wandering all over the place, just waiting to stop you from saving humanity. Let’s just hop past the jump and get into this, shall we? 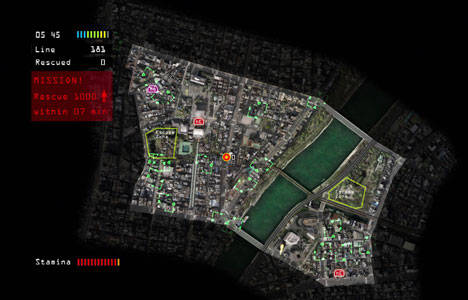 Taken from a top-down perspective, you run around in a Google Maps-esque scenario, dodging patrolling monsters of various shapes, forms, and abilities, hoping to God that they don’t suddenly charge you and break your gigantic chain of 1,000 people.

In order to find out just where all the people are, you’ve got the aid of a heat vision mode, which will show you just about how many bodies are holed up inside each building, at the cost of not being able to see the “zombies” that are roaming about the stage. The difficulty in each stage ramps up at a pretty consistent level, as the game introduces new enemies that will prove to be a thorn in your side.

It doesn’t take much to figure out how to play: you need to learn all the nooks and crannies of a city while running across the map to gather large groups of people, and the utilize that knowledge as you try to avoid the monsters and weave through the city, picking up a few more people and hopefully some powerups along the way — they consist of more energy, the ability to stop time, to become invisible from the zombies’ sight, and to warp back to the escape zone. 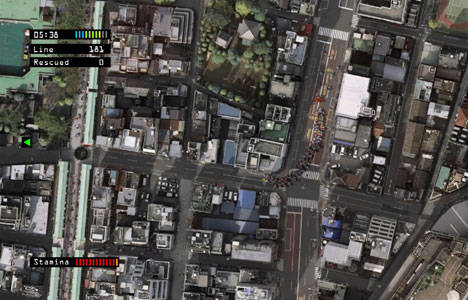 Now, being the deaf player that I was for this game, I had no audio cues to warn me when monsters were nearby. I had to rely on the occasional warning from the game, which would say “Giant Bug Zombie is nearby!”, or more commonly, rely on the rumble from the DualShock 3 as the crowd of survivors following me would tremble in fear.

Because I wasn’t able to play this with any sound, I would frequently run into situations where the enemies blended in with the street view too well, or were partially covered by trees, making them nigh-impossible to see, and as a result, I’d get attacked and die (you only die if you, the last guy, get hit by an enemy). The game quickly went from challenging to frustrating, making it impossible to complete a stage in one try.

Once I resolved myself to this fact, the game became fun again. I had to supply my own music to the game, but I started paying closer attention to the visuals in the game, and made greater use of the zoom in/zoom out function to constantly check my location against the greater map of where I was working in. 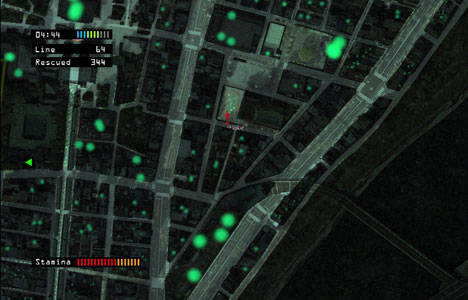 One of my big complaints with this game is how the levels are laid out. Sure, it’s actual cityscape, but the developers were still able to program which streets you could head down and which ones just disappeared in the giant mass of buildings, making things a bit more difficult when trying to navigate the area just by normal sight. When you switch into heat vision mode, you can see the outline of the buildings and available roads, but I shouldn’t have to rely on that just to tell where I can walk.

The feeling of the game is not one that I can pin down exactly, as it fluctuates too much, and I was playing a somewhat incomplete version. I guess the best way to summarize it is that the game tries to follow the “ideal” difficulty curve for a game, but ends up overshooting and becomes extremely difficult as it progresses, almost to controller-throwing levels.

So in the end, this is going to be one of those titles that you either love or hate. Certainly if you’re the type that loves to punish yourself with games that are ball-bustingly hard, then you’ll enjoy The Last Guy. This title is certainly a niche one, but that doesn’t mean that you shouldn’t give the demo a shot to see if you’d like it. I know I did. 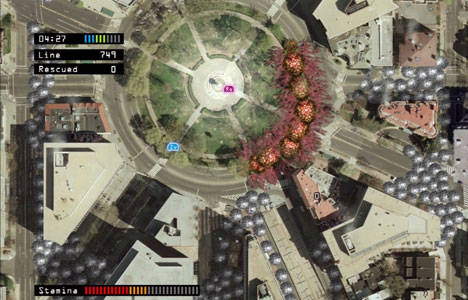 Even after playing the game for hours, I still don’t know what to make of The Last Guy. This is not what I expected out of the PS3 when I bought the thing — but that’s actually good because I never expected to like a PS3 game this much. It offers something you can’t get anywhere else on any modern home console; a bizarre four-way between Choplifter, Snake, Zombies ate my Neighbors, and the original GTA, with some Katamari Damacy thrown in for good measure. If that’s not something for PS3 non-owners to be jealous of, I don’t know what is.

You may have heard that The Last Guy has zombies. Well, that’s sort of a lie. The Eye of Folger is not a zombie, and neither is a giant purple guy who likes to smack people, but they all get called zombies in The Last Guy. It’s just one of the many things about the game that’s just plain silly. But that’s O.K., because the monsters of The Last Guy more than do their job of making you feel constantly unsafe and completely powerless, which is what any good zombie aspires to do.

In truth, it’s a better game for not having “just zombies”, as zombies usually come in only one or two varieties (fast walking, slow walking, etc), whereas the “zombies” in The Last Guy range from giant purple chameleons to deformed female buffalo. It’s this level of variety that keeps this otherwise repetitive gameplay of the The Last Guy from quickly getting stale, though I do wish it featured at least one level with “zombie zombies” — actual walking dead people that can turn others into actual walking dead via the traditional methods. 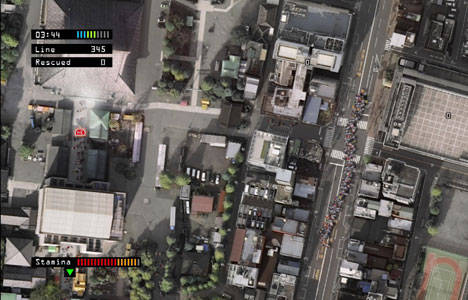 As for the gameplay, it’s certainly not for everyone. The Last Guy is more for Pac Man and Pikmin fans than it is for followers of Resistance or Uncharted. In the game you have no powers or abilities to help the people people you are rescuing, other than the fact that for some reason, the zombies don’t scare you. It’s this bravery that makes “The Last Guy” in The Last Guy a hero who deserves to be followed.

Towards the middle of the game, it gets way too hard. The first few levels have a certain freedom to them where you can try to collect people in any order you want, though strategy still goes along way in maximizing your overall rescue total. Things get harder with the first “boss fight” on level 1-4, where an off screen “Big Zombie” boss screams at you approximately every 30 seconds, causing any survivors you’ve collected to crap their pants and take off to the nearest house.

Unfortunately, as the game goes on, it relies less and less on strategy and more on map memorization and blind luck. The game gets to a point where you have to know where the highest density of survivors are before you even start your game, just as in the later levels of the Katamari Damacy. But unlike the Katamari game, The Last Guy features tons of enemies, all of whom can completely ruin your game in just one hit, meaning that you can make absolutely no mistakes. The light-hearted tone of the game gets thrown completely out the window, and it becomes an exercise in true white knuckle, controller throwing frustration. 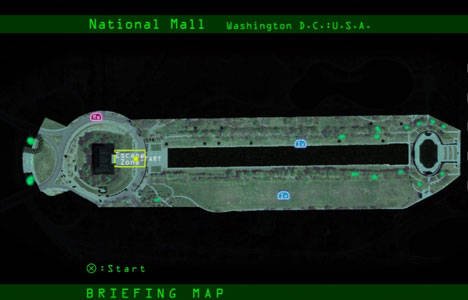 Speaking of light-hearted, there is no ignoring this games’ soundtrack and the over-the-top poppy, quirky joy it attempts to bring the player. Nearly every level of The Last Guy, as well as all the promotional videos thus far released for the game, features a shameless rip off the classic 70’s hit Popcorn that is sure to be remembered long after every other aspect fo the game is forgotten. Believe it or not, this theme of The Last Guy is the true “make it or break it” aspect of the game. If you hate it, you will hate the game, as you cannot play The Last Guy effectively with the sound off (something Brad knows from experience). Many of the game’s enemies are invisible, and/or can be hidden by aspects of the environment like trees or bridges. In such cases, the only signal to tell you that you’re getting close to a lethal foe is the collective scream of fear that comes from your line of survivors, something you won’t hear with the mute button on.

In closing, The Last Guy is undoubtedly a very special game. It offers an experience that really can’t be had anywhere else. Still, the game has plenty of “sequel room” for improvement. If The Last Guy had some sort of cut scenes between levels (preferably featuring the game hilarious development team as actors) in the same style as Elite Beat Agents or Katamari Damacy, it would really help to break up the gameplay and intensify the player’s sense of connection with the game’s world. And as nice as the constant variety of enemies is, the game still gets repetitive. The ability to swim, climb ladders, use public transportation, any method to interact with the game’s environment, all would have gone a long way towards keeping the game fresh and interesting. If the game just got more interesting as it went along, instead of just more difficult, I’d be tell every PS3 owner out there to but the game immediately. 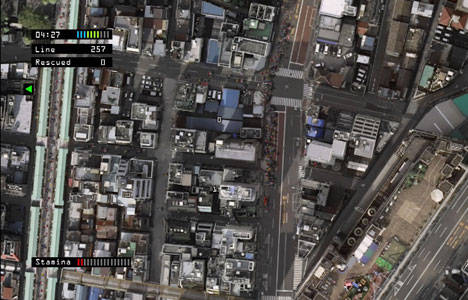 What I can tell you is that The Last Guy does a near flawless job of what it sets out to do; provide the player with exciting, amusing, and old-school frustrating arcade survival-horror action. If that sounds like it’s for you, then don’t just go by the very limited free demo. Buy the game and see for yourself.