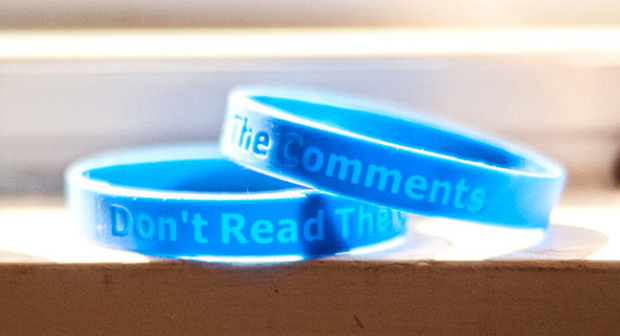 All comments on this post are ironic by default

Zoe Quinn has a habit of getting people talking. Her Fake Nerd Girl Detector certainly inspired some discussion, and Depression Quest (the latest game from her and Patrick Lindsey) has been drumming a lot of attention. The two will be appearing on New England cable TV to talk about the game later tonight.

When you do something that gets attention, you will get comments, and when you get comments, some of them are going to be written by people who want to make you feel bad. That’s why it’s seldom healthy to take internet comments too seriously. It’s something we all know, but the instinct to see what others think of your work and to take their comments as a reflection of your skills as creator is always going to be there.

Now you can wear a constant reminder of what to do with those kinds of comments on your person at all times, lest the sudden urge to read them hit you in the middle of a nap or a morning shower.

Personally, I don’t know if I’d make half as much stuff as I do if it weren’t for internet comments. Hearing from people that have got something from my projects, even if that “something” is a sense of superiority over me and everything I do, is still quite validating. A lot of Teenage Pokemon‘s most loyal viewers claim to hate the show. They tune in every week just to say that it’s way below their standards, which I suppose is a valid way to feel good after watching it.

That said, there are definitely times when obsessing over people’s strong dislike of me and things I’ve made is discouraging. Now I have a bracelet for just those occasions. Thanks, Zoe!