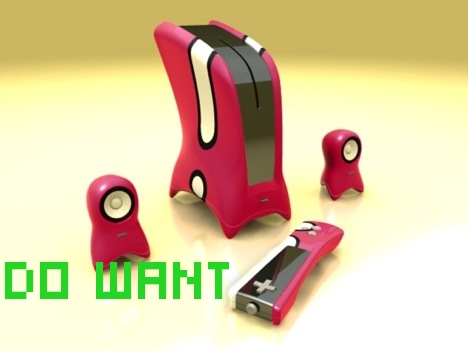 We know that you like videogames, or else you wouldn’t be browsing right now. For some enthusiasts, games transcend the confines of hobbyist enjoyment and enter into the realm of art. Usually, this territory quickly becomes mired in too much Lara Croft or Dead or Alive characters, so it is especially refreshing to see something this elegant.

This hot little pink number is called the “Nintendo Dragon.” Elliot Ortiz created it, with inspiration apparently taken from the Wii. Futurenerd describes it as a “toy” that will serve only as a display piece for those entrenched in videogame culture.

Personally, I think it looks pretty slick. I especially enjoy the appearance of the Wii Remote and its streamlined design. If only we could all toss away our bulky controllers for something this pretty. For an additional picture that shows a side-by-side console comparison, as well as a brief description by the artist, hit the jump.