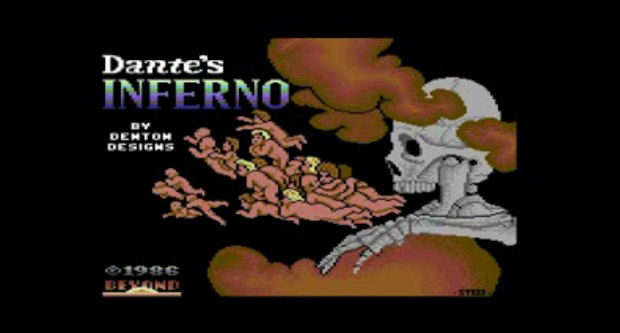 When Visceral Games and EA first announced its God of War-esque action game, Dante’s Inferno, they were greeted with a mixture of disbelief and uproar. Some gamers could not comprehend how you could even begin to base an action title around Dante Alighieri’s famous literary satire, while others were outright offended that such source material was being raped to serve the greedsome corporate machinations of the evil and disrespectful games industry.

Perhaps they did not know, as I certainly did not until recently, that EA’s Dante’s Inferno is not the first game to name itself after The Divine Comedy. Decades earlier, Denton Designs and publisher Beyond had beaten Visceral to the punch by releasing its own interactive take on the much-lauded poem. That’s right, the concept of basing a game upon Dante’s Inferno has existed since 1986.

Read on as we discuss Dante’s Inferno on the Commodore 64.

Dante’s Inferno for the Commodore 64 wears its heart on its sleeve, and as you can see from the very title screen, definitely pays its due respects to the book upon which it is based. Rather than take Visceral’s approach and weave its own original aesthetic around the established text, Denton’s game has a visual and musical style that is far more authentic and should provide literature fans with far less to be upset about.

This Dante’s Inferno of 1986 is not so much about gory action and burying crucifixes into people’s skulls. Rather, it is a top-down adventure game more in the style of The Legend of Zelda than God of War. The levels are set out like simple mazes, with main character Dante navigating his way through the Underworld, discovering and acquiring a variety of items to use in his quest. 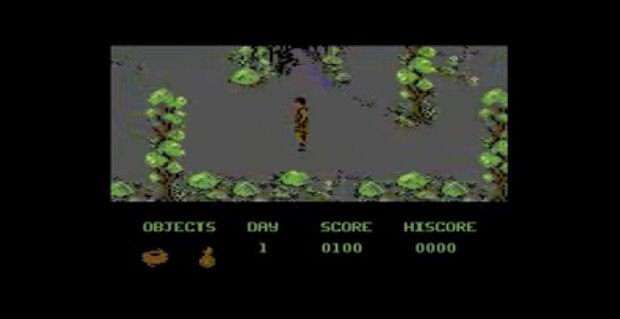 The game does what it can to truly absorb you into its atmosphere. As you first enter the realm of Hell, scrolling text urges you to “Abandon Every Hope.” You’ll start off in Limbo, otherwise known as the First Circle of Hell, and as you may expect, there’s not much to worry about here. You just wander around the rather depressing tundra, picking up an item or two, before encountering the Ferryman. It’s here that your HELLISH NIGHTMARE shall truly begin. 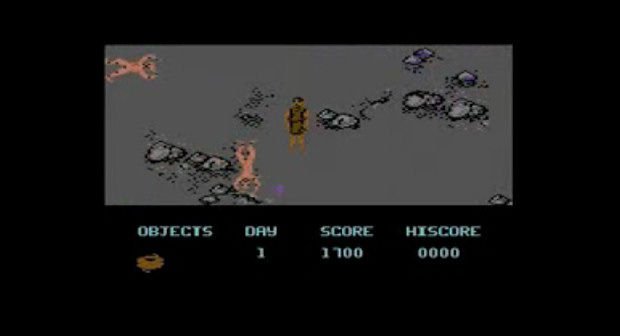 The Second Circle of Hell is represented perfectly in this game. As fans of the poem will know, this is where those who have committed the sin of lust go, that their souls might be blown to and fro in a storm for all eternity. Dante’s Inferno on the C64 represents this accurately, as the player will have to navigate his way through a stream of spinning devils who are blown from one end of the screen to another. It’s a very frightening section of the game, and some players may actually believe they are in Hell itself.

We go straight from Lust to Gluttony, and the Third Circle which Alighieri said was guarded by Cerberus. Here, the game deviates a little bit, replacing one all-powerful Cerebrus with several patrolling Hell Hounds. Well, they don’t really look like Hell Hounds per se, but I’m sure you get the idea. These black dogs will chase you if they spot you, so don’t hang around too long. You do not want a piece of those bitches.

Time for the Fourth Circle now, and we’re back into authentic territory with the land of Greed. In the poem, doomed souls would be made to push rocks for all eternity as just punishment for their selfish ways, and Denton Design has come up trumps with a most evocative representation. Yeah, so it’s basically the Second Circle again, just with different character models, but that’s okay. That’s okay.

This has been great so far, but the game tops itself with Circle Five. As players trudge through a dark and murky River Styx, they must avoid the hands of the sullen and the slothful, as their blackened hands reach up from beneath the water in an attempt to do him bad business. Anybody who hasn’t already shit themselves with fright will soon evacuate their bowels with the blood-curdling horror of this particular Circle. 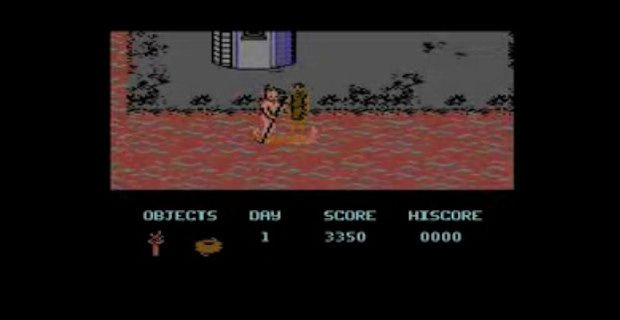 In the book, Dante and Virgil encounter Phlegyas, who takes them on his skiff so that they may continue their journey. Once again, this game delivers, providing the exact same experience. It is thoroughly amazing, just how close to the source material this game is. It’s as if the very book itself has come to life.

A quick river journey later, and we’re in the Sixth Circle. First, we have to avoid the wrathful Medusa, who doesn’t want Dante to get through the walls of Dis. The interesting thing to note here is that this Gorgon is incredibly serpentine and does, in fact, look almost exactly like the Gorgons from God of War. Could it be that God of War copied Dante’s Inferno, only for a NEW Dante’s Inferno to copy IT? This could be the scandal of the century, people!

Anyway, we’re properly into the Sixth Circle now, and things are as you’d expect … with a twist! It seems that the Heretics are not trapped in their tombs for all eternity, and as players note the seemingly empty graves, they must do battle with evil demons who have escaped. It seems that the only way to fight these heathens is to smite them by using a Holy Cross found scattered on the floor. This vanquishes them in seconds.

Now it’s time we started getting serious, as we enter the Seventh Circle. In the book, this Circle is divided into three sections; a river of boiling blood for violent sinners, a mass of thorny bushes and hungry dogs for the suicidal, and a desert of flaming sand for blasphemers and sodomites. They have all been rolled into one for this section, it seems. Sadly, however, there is no sodomy.

Eventually, Dante finds his way to the Eighth Circle where, just like in the book, he’ll come to a huge cliff edge that can only be traversed by riding on the back of Geryon. He enters Malebolge, and astute players will be thrilled with the fan service on display, such as Demons with whips, and corrupt politicians immersed in boiling lakes. The ten sections of Bolgia are all nicely indulged with little visual representations of the sinners and their punishment, You can make out imagery of hypocrites in lead cloaks and the dismembered corpses of those who sow discord. It truly is a stunning achievement.

After what feels like days, but is only really about four minutes, players will finally reach the bad boy itself, The Ninth Circle. You just know some shit is about go down, as Dante makes his way through the frozen depths, avoids the clawed hands of treacherous souls and finally encounters The Beast. Oh man, this is going to be epic. Dante approaches Satan himself, and prepares for the final, thrilling encoun … oh. Oh no, wait. You just walk up to Satan and win the game.

Inexplicably, after merely approaching Beelzebub and winning, the game starts playing “Joy To The World.” Dante stands next to a tree for a bit while the game proudly proclaims, “See once more the stars.” Sounds like Hell’s incredibly easy to get out of, actually.

Sarcasm aside, it’s actually quite impressive just how true to the original masterpiece this lowly Commodore 64 title was. The game truly worked with the source material and produced a game that mirrored all the events of The Inferno. It’s quite amusing to think that while we criticized the idea of producing a game based on this epic poem, it had already been done over twenty years ago, and with no small measure of success, I might add. As Visceral Games is clearly providing its own distinctive take on Dante’s Inferno, literature buffs can take some solace from the fact that at least one videogame did it right.